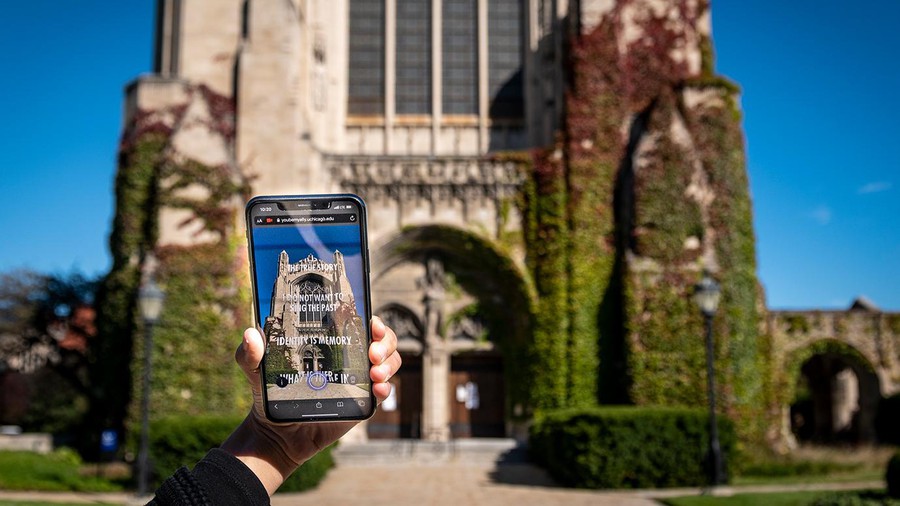 In her distinct style, famed conceptual artist and UChicago alum Jenny Holzer’s (EX ’74) commissioned work for the University of Chicago projects all-caps, unpunctuated fragments of text onto building facades. Her new public art installation, You Be My Ally, selects 29 quotations from UChicago’s College Core texts and places them into dialogue with the University’s iconic architecture. But there’s a catch: The experience is minimized into a phone screen by its medium—augmented reality.

In the physical realm, the exhibit is marked only by square-foot QR codes pasted to the sidewalk, which, as I learned, are pretty easy to miss. It took total circumnavigation of Mansueto to find the code, even after repeated reference to the virtual map provided on the commission’s website. As the augmented reality (A.R.) application finally snapped into place, and quotes by Rumi, de Beauvoir, and Fouad Laroui began to glide from the base of the building to its apex, two thoughts ran through my head: one, this looks like the opening crawl in Star Wars. And two, I thought this would be grander.

Looking at my tiny phone screen, I was struck with the sense that this was about as good a facsimile for Jenny Holzer’s usually enormous, crowd-drawing installations as Zoom classes are for the real thing. When I tried to align the AR camera to the building, it didn’t help that I felt like a tourist, or perhaps a benign baby boomer fumbling with their camera for the first time.

Once I looked away from my phone and refocused on the real Mansueto, this feeling was entirely erased. The actual building seemed even grander than it had before, purely by comparison to the miniature version. At each location, the art took complete effect only after I put away the augmented reality and took in the actual scale of the building. In this way, the augmented reality exhibit asks more of the viewer than Holzer’s usual modus operandi. The viewers of You Be My Ally must piece together the building’s size and the conceptual impact of the language.

Holzer originally intended to use large-scale projections, but decided against it to avoid drawing large crowds following the COVID-19 outbreak. To compensate, LED trucks lit up with similar fragments of text to drive around Hyde Park and downtown Chicago, which confront unsuspecting passersby in a way the AR exhibit does not.

Though the university commissioned the work, Holzer created the idea after being awarded the Rosenberger Medal for Outstanding Achievement in the Creative and Performing Arts in 2019. Medalists traditionally give speeches after their award, but Holzer, who has always refused to give public addresses, responded with this idea instead. One might think that Holzer’s interest in the Core curriculum stems from prior engagement with the heavyweight texts in the Hum and Sosc syllabi as a UChicago undergraduate a half-century ago. Project intern Zahra Nasser states about a departmental dean’s alleged comment: “It looks like she did everything in her power to avoid taking Core classes.” Nasser adds that Holzer “transferred [after one year] because…‘she didn’t think she was smart enough for the Core’…she clearly felt like she didn’t fit in…but clearly she’s interested in [the Core], whether or not she likes it.”

The Core, of course, is the conceptual meat of the commission. Some collections of quotes share more obvious commonalities than others: The School of Social Service Administration’s (SSA) fragments, selected from Mary Wollstonecraft, Sappho, and Claudia Rankine, gel around themes of concretion, tangibility, and cohesion, while those that slide across the Logan Center for the Arts, by Audre Lorde, Simone de Beauvoir, Hannah Arendt, and again Rankine, convey uncertainty and impermanence. Even in these few names, it’s clear that Holzer’s choices of quotes were deliberate not only in content but in authors as well. Nasser said, “Throughout her practice, [Jenny Holzer] has been interested in issues of gender, in issues of power, and she’s a very political artist inherently…. This is just a reflection of her practice: amplifying female voices, amplifying underrepresented voices in whatever she’s doing.”

Do Holzer’s choices, then, merely reflect the common Core experience of a College student today? Or was Holzer more critical in her selection, crafting a more equitable cast of characters than what the stodgy, outdated Core currently maintains? Whatever Holzer’s intent, the outcome is an array of authors that, on the whole, are much more contemporary than, say, my readings in Greece and Rome. Her choices of buildings reflect this sentiment: Though the university is iconic for its palatial neo-Gothic style, only two of the buildings chosen for the project fit this bill. Instead, Holzer guides us to the glass and steel of Mies van der Rohe’s SSA building, and Eero Saarinen’s modern Law School building.

What Holzer ultimately presents to us is an artist, or perhaps a student, in conflict with the College’s Core curriculum. From the recalibration of the College canon’s demographics, to her personal history with the Core, even to the diminutive effect of the A.R. on the language and the architecture, Holzer creates a version of the Core that doesn’t quite align with UChicago’s. Her Core is one that’s impermanent, mutable, as is the augmented reality through which it’s presented. Holzer’s A.R. Core, though its presentation is clearly integral to the university by its attachment to the physical buildings, is also optional, easy to bypass, and seemingly interrogates the necessity of a standardized Core at all.