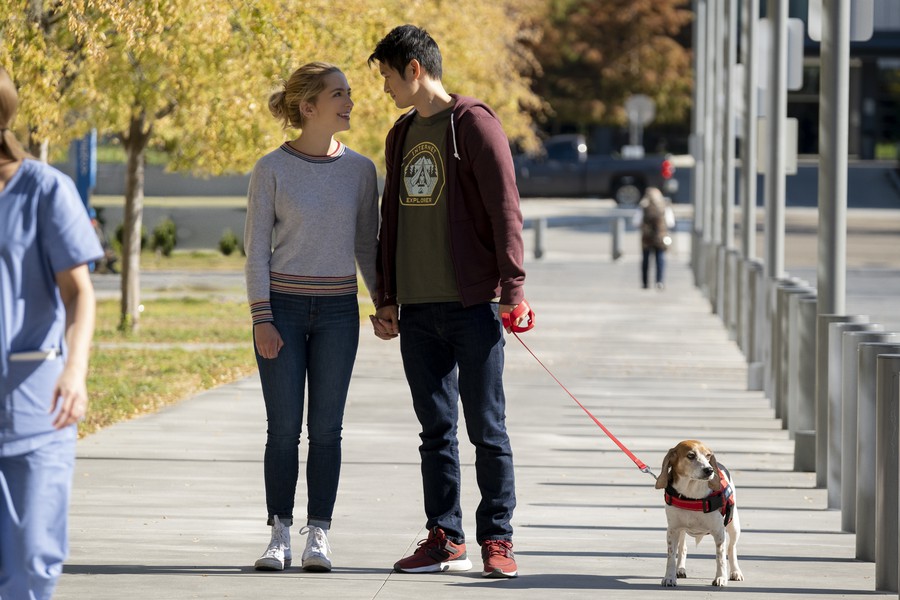 Jennifer Carter (Jessica Rothe) and Solomon Chau (Harry Shum Jr.) enjoy a sunny walk with their dog in "All My Life".

This review contains mild spoilers for the movie All My Life. Any critique/commentary is directed towards the fictional characters and the script, not the real-life people or story on which the movie is based.

Directed by Marc Meyers, All My Life is based on the true story of Jennifer Carter (Jessica Rothe) and Solomon Chau (Harry Shum Jr.), a couple whose wedding plans were put on hold when Chau was diagnosed with terminal liver cancer. It’s a film about optimism in the face of tragedy, about seizing the moment and living without regrets, and about love weathering the toughest of storms: basically, all the clichéd bells and whistles of every film about cancer.

Cancer sucks. Most people know someone who has suffered from cancer, and it never gets any less painful. All My Life doesn’t shy away from or gloss over this fact, but it doesn’t have anything new to say about it either. To make room for Chau to be diagnosed, to suffer, and to die on screen within the movie’s 90-minute runtime, the romantic development between Carter and Chau is like a compilation of every rom-com cliché on the planet at double speed, from meet-cute to public proposal. After that, there are the classic screaming fights and helpless frustration in the wake of Chau’s diagnosis, the friends and family coming together to help Carter and Chau (in this case, fundraising for their wedding), the post-death I-love-you scene designed to tug at heartstrings…. While All My Life has all the right emotional notes, these notes have been hit and surpassed by countless other films. Seriously, other than some surprisingly diverse casting choices, this film is about as cookie-cutter and formulaic as they get.

The film’s saving grace is the performance of its two main leads, Rothe and Shum, whose chemistry almost makes you forget about their nonexistent character development. Rothe almost makes you believe that Carter was as understanding and upright as the script writes her. In one standout scene, Carter breaks down alone in her car, smacking the steering wheel and yelling “No!” repeatedly; her pain is palpable, giving dimension to a flatly written character. Meanwhile, Shum brings life and personality to his portrayal of Chau, almost convincing you that Chau is more than a plot device designed to make Carter look like even more of a saint.

Ultimately, All My Life is Carter’s story, one she decides to tell in the wake of Chau’s untimely death. This limits the perspective of the film, as Carter is implausibly flawless while Chau is relegated to highlighting that flawlessness. All My Life shows how Carter inspires Chau to chase his dreams of being a professional chef, but it leaves you wondering: How did Chau influence Carter’s life? If Chau’s culinary creations are inspired by Asian cuisine and flavors, where did this inspiration come from? He has no Asian friends and never seems to contact his family. How does Chau feel when he is told he has less than a year left to live other than wishing that Carter doesn’t have to deal with it too? Why is Chau still absurdly fit and attractive when he’s supposed to be at death’s door? All these questions are left unanswered by lazy writing.

All My Life comes out this Christmas season (in theaters starting December 4 and on demand starting December 23), but it’s more a Thanksgiving film than it is a Christmas film. It’s the sort of tearjerker that doesn’t really do anything new, and after its 90 minutes are up, you’ll have cried a bit and felt sad about love and thought about what you’re grateful for in your life. And then you’ll move on and forget about it.