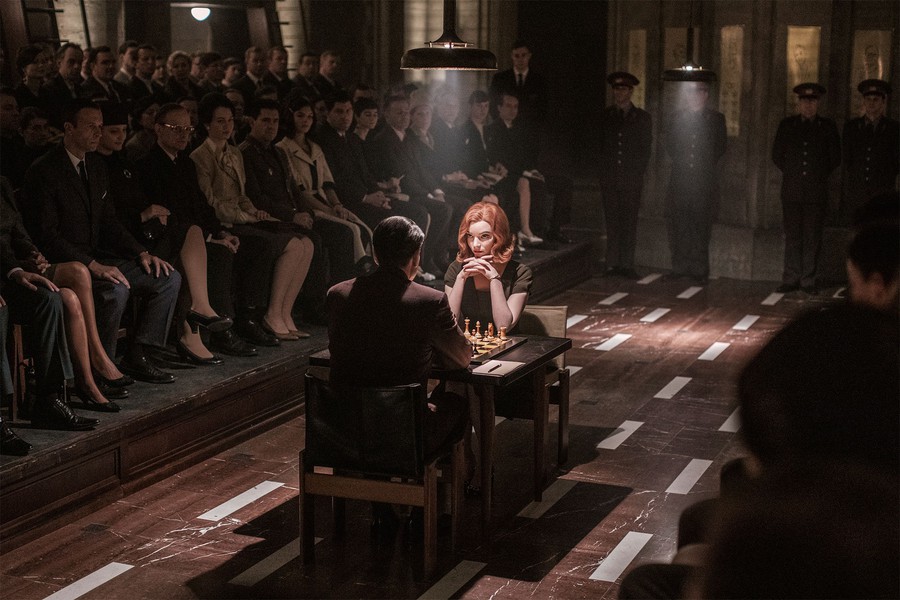 By Veronica Chang   and Neel Lahiri

For a glimpse of what makes The Queen’s Gambit special, look no further than the second episode. Having bulldozed her way through a series of opponents at her first competitive chess tournament, recently adopted orphan Beth Harmon (Anya Taylor-Joy) is pitted against a man she has been exchanging lightly flirtatious glances with since the start of the event. She stares open-mouthed at her bemused opponent (Jacob Fortune-Lloyd, one of three British actors with surprisingly believable American accents whose characters are summarily defeated and enthralled by Beth throughout the course of the show), who asks with a smirk, “Do you want to start my clock?”

The game proceeds on, with rapid cuts back and forth between close-ups of Beth and her opponent all underscored by a playful melody. The connection between the two players is palpable, but flirtatious glances are replaced by tactics and attacks, and Beth’s eyes hardened and confident as they dart from the board to her opponent’s face. Before anyone can register what has happened, she has cornered him; he reaches over, holds out a hand, and retires. Checkmate.

Whatever one thinks of chess, “exciting” is not a word that immediately comes to mind. Yet this scene, and indeed the entirety of Netflix’s masterful new miniseries, somehow infuses a game with a reputation for staidness and high intellect with exhilaration and even glamor. It is a high-wire feat of accomplished filmmaking and storytelling, hard to fathom even as it unfolds in front of one’s eyes. The Queen’s Gambit needs to be seen to be believed.

The series, adapted by Scott Frank and Allan Scott from a 1983 Walter Tevis novel and directed by Frank, tracks Beth from early childhood to her twenties as she catapults to chess stardom. After she miraculously survives a car accident that instantly kills her mother (and with her father already out of the picture), she winds up at a strict girls’ orphanage in Kentucky, where the children are given a daily dose of “vitamins”—one of which is a tranquilizer. This is the start of one of her lifelong addictions; the other begins when Beth, sent to the basement to clap erasers, spies the school janitor Mr. Shaibel (Bill Camp) staring at a chess board, playing in solitude. She begs him to instruct her, which he does with reluctance, believing that girls do not play chess. Her initial frustrations morph into obsession, leading her to use the tranquilizer pills to stay up at night, visualizing chess pieces moving on the ceiling. Soon enough, an embarrassed Mr. Shaibel is staring in shock as she annihilates him on the chessboard. Girls do not play chess? Please.

It is from these humble beginnings that Beth begins her precipitous rise to the upper echelons of the game. She is soon adopted by the Wheatleys, an unhappily married couple consisting of the unstable alcoholic Alma (Marielle Heller) and her gruff husband Allston (Patrick Kennedy), the latter of whom quickly leaves adoptive mother and daughter to fend for themselves. Despite Alma’s initial reluctance to let Beth pursue chess, the determined young girl saves her own money to enter a tournament—the scene of the thrilling match described above.

As Beth’s wins become larger and larger, so too do the stakes of her journey. The Queen’s Gambit opens with Beth stumbling out of a bathtub in a dark hotel room, makeup ruined and the floor littered with clothing and various glass bottles; she downs two pills and runs barefoot to her match, where a crowd of waiting reporters instantly cluster around her. It is established from the beginning that Beth is struggling with an addiction; that her genius will come at a cost. What the series reveals, episode by episode, is how this cost affects Beth’s journey into adulthood, her relationships with those around her, and her understanding of herself.

Beth’s journey has all the makings of a clichéd coming-of-age drama, from the antisocial genius orphaned at a young age to the only girl in a “man’s game” struggling to find herself. Yet, The Queen’s Gambit neatly sidesteps these clichés: Beth comes to share a flawed yet heartwarming connection with her adoptive mother Alma; her early opponents become her biggest supporters; she’s terribly awkward at flirting and captivated by gorgeous 1960s dresses and skirts (all the credit to costume designer Gabriele Binder for Beth’s impeccable outfits; no credit for Benny Watts’s (Thomas Brodie-Sangster) ugly leather trench coat and cowboy hat ensemble). Beth is a phenomenal chess player, says The Queen’s Gambit, but she’s also a daughter, an addict, a fashionista—she’s growing up.

Though it may be billed as a chess drama, the genius of The Queen’s Gambit is ultimately its versatility. It tackles addiction without being an addiction drama, the drama of sport without being a sports drama, the emotions of a coming-of-age drama without falling prey to the clichés of the genre. In less adept hands, this may have come off as unfocused, but the series grapples with these themes without letting any of them supersede the others. In this way, The Queen’s Gambit becomes something truly unique, defying genre by touching lightly on so many.

Much of the credit for this startling achievement must go to Scott Frank, who directs the series with aplomb. He is meticulous in his decisions about what goes into the frame and where, how the camera ought to move, and how to pace scenes. The high-octane nature of Beth’s chess matches stems largely from Frank’s creativity in their depiction, from the varied speed of editing to the clever camerawork. New techniques are unleashed at each different competition to give each one its own character. One of Beth’s high-stakes tournaments is depicted entirely in split screen, with her and a major adversary shown taking player after player apart, until the screens merge in their final face-off. Another match starts with a top-down shot of  Beth and her opponent, the camera roving down to view them from the side and canting back and forth as though to indicate the ripples Beth is making in the chess world.

The worry one often has when a fictional story depicts a niche subculture is accuracy. But Frank and Scott solicited the help of chess royalty, such as World Champion Garry Kasparov and legendary coach Bruce Pandolfini, to ensure that the moves and board positions made sense. All the jargon being speedily dished out by Beth and her fellow obsessives—“Sicilian opening,” “passed pawn,” and yes, “queen’s gambit”—are all real chess terms. The series thus entices chess fanatics, while its myriad cinematic virtues prevent the jargon from alienating the average viewer.

The entire venture would likely have fallen apart, however, without the powerhouse performance at its center. Anya Taylor-Joy crafts a haughty and tempestuous character, constantly yearning for more without being entirely sure what she wants. She inhabits the insecurity and naïveté of an early teenager as credibly as she does the self-assured rebelliousness of a young adult. Her depiction of the transition between these two states is understated, primarily carried out through subtle changes in the physicality of her performance—a bit more freedom as she walks, a bit more confidence in the way she carries herself. There’s a moment in the third episode where Beth confidently introduces herself to her opponent, who emphatically responds, “Shit.” Not only is this a level of renown one can only aspire to achieve in their lifetime, but it’s also a reflection of how Taylor-Joy and Frank make Beth’s skill apparent to even the most uninitiated in chess.

Ultimately, the key to Taylor-Joy’s performance is the incredible expressivity of her eyes, which glimmer with unblinking intensity and unadulterated power. Some of the show’s most delightful moments are when she hits one of her smug male opponents with a withering glare, quickly relieving them of their overconfidence and forcing them to look at her as a fellow player as opposed to a woman in a male-dominated game. Taylor-Joy’s performance commands attention, both from her opponents sitting across the board and from the viewer.

The Queen’s Gambit is not without its flaws, with what is perhaps an overly sentimental conclusion and a few underdeveloped romantic subplots featuring that kid from Love Actually (Thomas Brodie-Sangster) and Dudley Dursley from Harry Potter (Harry Melling). However, these can be easily forgiven as the series comes together so cohesively and powerfully. The Queen’s Gambit paints a compelling portrait of a genius growing into adulthood, one move at a time. It is escapist without being idealistic, joyful without being saccharine, and an enthralling delight from the opening to the endgame.