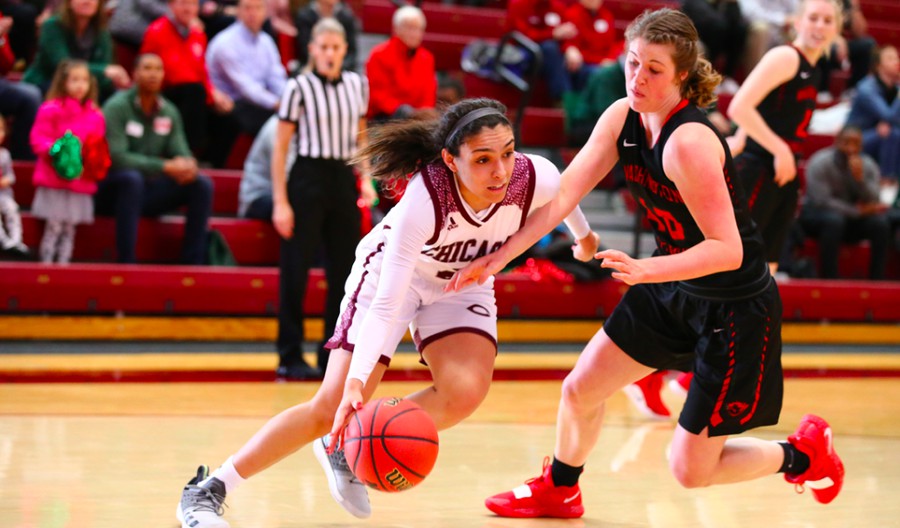 According to one of her teammates, she is “one of the most competitive people I have ever met.” She “hates to lose more than anything.” These are just a few of the statements used to describe Mia Farrell, the standout point guard on the women’s basketball team. Farrell is a member of the illustrious Class of 2020, which has three 1,000-point scorers. The other two members of this exclusive club, Taylor Lake and Miranda Burt, are effusive in praise for their teammate.

A trait consistently mentioned when discussing Farrell is “her fierce drive and passion,” in the words of fellow fourth-year Lake. This desire to be the best and consistently improve has been evident in Farrell’s four seasons at UChicago. She developed from being an important bench contributor in her first year to a full-fledged starter the past three. Her consistency is truly something at which to marvel as she has been healthy to start her last 72 games, creating her own iron woman streak. Her ability to remain efficient, even with an increase in the volume of shots and a higher-profile role on the team, exemplifies her effect on the team and her direct impact on its growth.

Her hatred to lose is evident in her ability to hit the important shots at clutch times. Fellow fourth-year Burt emphasizes that Farrell “has a knack for hitting the big shot when we need it,” whether at the end of the game or a run-stopping basket. This clutch gene has been on full display since she stepped off the bench and scored a game-winning shot against NYU.

Fearlessness is another descriptor given by teammates to Farrell. She has no fear driving in and drawing contact against bigger players in the paint. In fact, she relishes it: Farrell holds the school record for the most free throws attempted in one game, with 18 against Wash U in 2018. Her ability to put the other team’s frontcourt in foul trouble as well as converting at the foul line is special. It’s not just the quantity of free throws that Farrell earns, but her ability to turn them into points that is impressive. Currently Farrell is fifth in all-time career free throw percentage at UChicago with an impressive 80.5 percent. This fearlessness in the paint is one of the reasons that Lake describes her as “one of those players every team wishes they had on their side because it’s terrifying to play against her.”

When Farrell is consistently getting into the lane and to the foul lines, it opens up all aspects of the game for her and her teammates. Defenders are forced to pack the lane and clasp on her drives, giving Farrell more space on the perimeter and opening up passing lanes to teammates.  This was seen in this season’s game against NYU as Farrell tied her career best in points with 31. In that game, she showed her desire to battle inside with the posts.

The final trait that distinguishes Farrell is her ability as a teammate. According to Burt, Farrell has “been a great friend and teammate to me throughout these years, always supporting me and helping me become better myself.” Burt adds, “I can’t wait to see the accolades she collects as she finishes out her career.” Lake reiterates Farrell’s skill as a teammate: “No one hypes you up more in a game than Mia, and [she] will be the first to have your back in anything on or off the court. Mia is an incredible competitor, leader and lifelong friend. My time here would not have been the same without Mia Farrell— [I am] glad we agreed on our recruiting visit that UChicago is where we were meant to be.”

For any leader, the ability to pick up and elevate teammates is a vitally important characteristic, and one that Farrell has embodied. Along with her teammates, fans of the Maroons share the same excitement to see how Farrell writes the ending to her storied career and how far this group of Maroons can go.