How to Conceal Colonialism at the MCA

At the MCA, Assaf Evron conceals colonial narratives by erasing the sociopolitical and material significance encoded in Jerusalem stone. 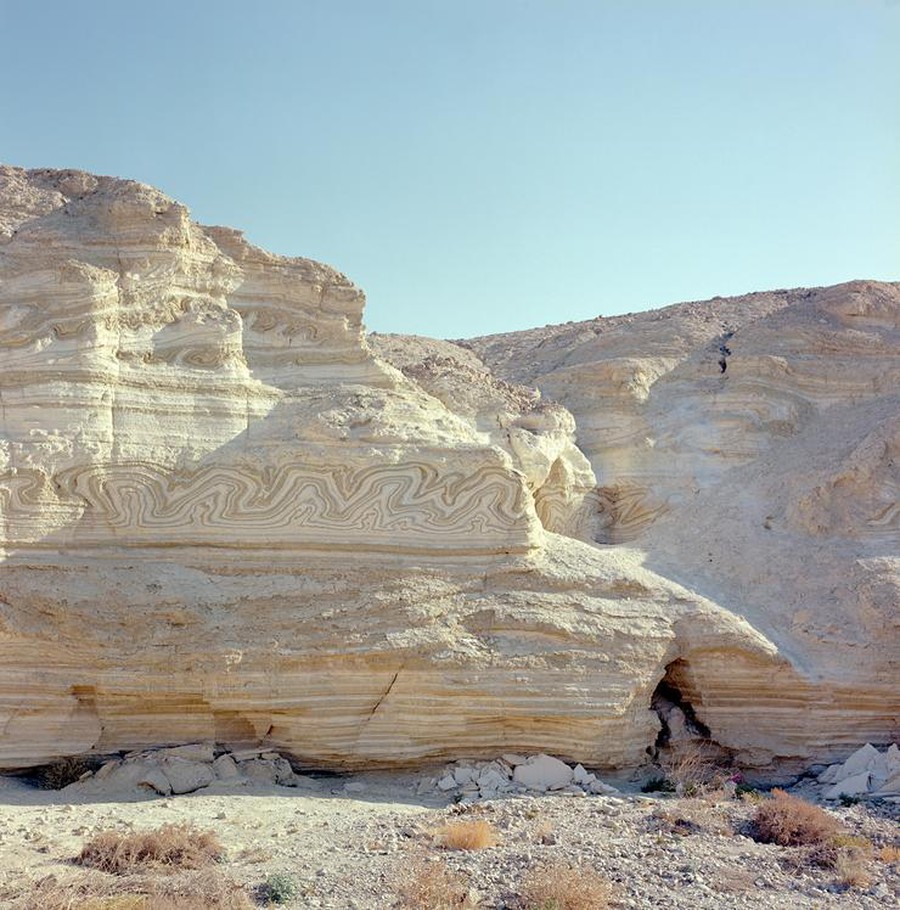 The current installment of the Museum of Contemporary Art’s (MCA) Chicago Works exhibition series is Chicago-based Israeli artist Assaf Evron’s self-titled U.S. solo debut. Evron’s work is architectural, kaleidoscopic, and playful, marrying the allure of nature with mesmerizing, puzzle-like geometries. In this particular case, he visualizes the twisting etymology of the “meander” from its natural origins as the windings of a river to its reification as an architectural motif on the buildings of Chicago.

Open until March 1, the exhibition coincided with the now-closed Chicago Architecture Biennial, for which the artist also installed a photo mural on the Esplanade Apartments, designed by Mies van der Rohe. Both projects betray an interest in the interplay between natural and manmade architectures, and the projection of meaning and historicity onto such structures. The photo Untitled (Sodom and Gomorrah), for one, pictures the twisting, intestinal patterns on the side of a small mountain in the Dead Sea, onto which the eponymous Biblical narrative is speculatively projected.

In the adjacent room, this mountainside meander is echoed in Untitled (Kikar Rabin Square American Accents), a tortuous installation of handcrafted wooden tiles painted in river-blue enamel of the brand American Accent—a material pun. The tilework is inspired by that of the titular Tel Aviv Square, whereas the framed collages nearby feature the ornamental meanders of several Chicago buildings, including the Marquette and the Monadnock. In the latter works, Evron’s goal “was to turn the building into a vase,” according to an interview on The Seen.

A larger work, which the artist describes as “architectural-scale collage,” is *Untitled (Zedekiah’s Cave)*. Wrapping around four walls, the photo-mural crystallizes like salts in a deep, moist grotto, jutting out at sharp angles while stacking neatly like bricks. Essentially a wallpaper, Evron created the immersive installation by arranging tile-like photos of limestone on the gallery walls. Cut into squares, triangles, and parallelograms, these pictures were taken at the eponymous East Jerusalem quarry, a historic site that has been under Israeli occupation since 1967. Some smaller-scale framed collages made in a similar vein are also on display.

At the locus of Evron’s interest in Zedekiah’s Cave is its mythological ripeness. Not only is it speculated to lie on the biblical king Zedekiah’s escape route in the sixth century B.C.E., but it also bears masonic significance as a source of the material used to construct King Solomon’s Temple. By treating it as a site of cross-cutting religious and geological narratives, Evron mines the quarry for visual material analogous to the way it would be mined for actual, physical material: limestone.

Ranging from off-white to pink, chalky to the touch, radiating under the sun or blowing in the wind, crumbling under bulldozers or bouncing off of tanks, limestone is a material that is highly charged with violent colonial histories of oppression and resistance, both past and ongoing. Its metamorphosis from stone to photograph to wallpaper in Untitled (Zedekiah’s Cave) delineates an undermining of its materiality, erasing and censoring those political realities in favor of an aesthetic mysticism of the stone. This dematerializing effect is compounded by Evron’s use of a ring light to photograph the quarry, which further flattens and abstracts its walls’ three-dimensionality and tactility.

When a space is “ordered up as something object-like,” or “made picture-like and legible, [it is] rendered available to political and economic calculation,” according to Timothy Mitchell in Colonising Egypt. In other words, underlying colonization is the imposition of a domesticating, disciplining force onto a site where disorder is wrongly perceived, such that the site becomes comprehensible and hence susceptible to subjugation. This aggressive projection of order finds itself enacted in Untitled (Zedekiah’s Cave).

Evron’s enforcement of what he terms a “photographic logic” on the limestone innards of the quarry imposes an intervening order on the natural material, local architectural practices that render it into buildings, and the city which it constitutes. While the disruption of tradition often constructively challenges us to question and even change the status quo, this subversive act gains a coercive connotation within a colonial context. As an artist visually mining a historical site on occupied lands, Evron is participating in and reinforcing Israel’s and America’s projection of oppressive control over Palestine.

Moreover, as an Israeli artist, Evron has the privilege of being apolitical and of not having to justify his entitlement to the land which forms the source material of his work. He has the privilege of deflecting questions about the history which granted him this entitlement, instead orienting the curatorial and critical discourses around his work purely on the visual and mythological, rather than contemporary sociopolitical, character of his subject matter. His co-option of the aesthetics of limestone and their projection onto the cultural site of the MCA recontextualizes them, bleaching the stone of the blood staining it.

By undermining the political and historical significance of the limestone, including the material reality of its destruction, with a purely spatio-visual poetry, Evron effectively takes viewers along a meander that conceals the colonial power that made this gesture possible in the first place.