Why They Tell the Story and Why We Should Listen

rom an original set design to incisive sociopolitical commentary, writer Isabella Cisneros makes the case to watch "Once on This Island" while you still can. 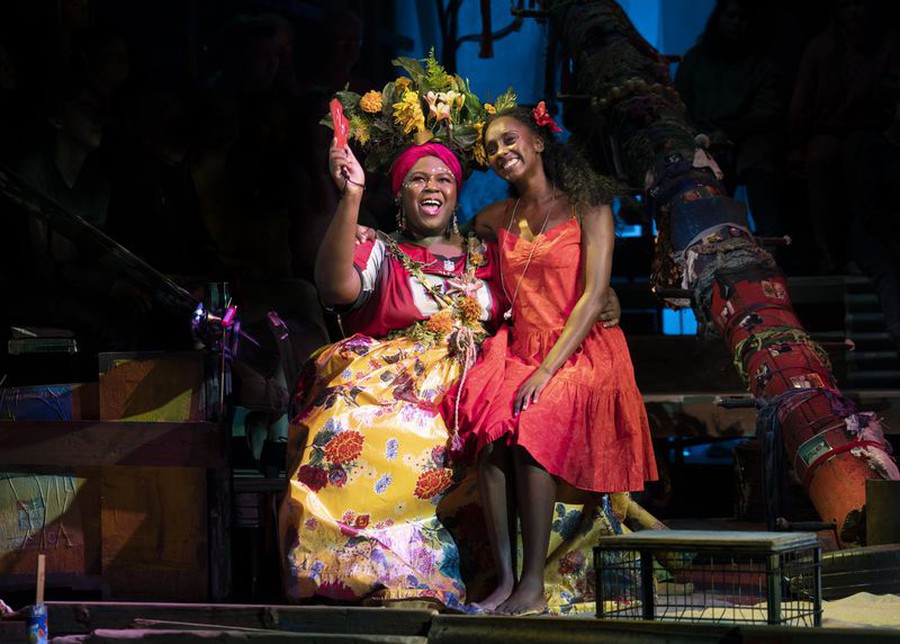 Getting sand accidentally flung into your face and feeling the brush of a plastic tablecloth as an actor twirls around you isn’t what people typically envision a theater experience to be. However, in this aspect and many more, the touring production of Once on This Island subverts its audience’s expectations.

Going on tour presented an obstacle for the staging of Once on This Island on Broadway, it resided in the Circle in the Square, a theater well known for its unique thrust staging. Transitioning from a thrust stage, which places its audience all around a center area, to a proscenium stage, where the audience is merely facing the stage from the front, was quite a challenge for the production, especially in conjunction with managing the logistics of sand and water on stage. It was not one the production shied away from.

Once on This Island first debuted its proscenium-style staging at the 2018 Tony Awards, where it also took home the Tony for Best Revival of a Musical. In the spirit of its original staging, the production added a twist to its proscenium design: onstage seating. Award-goers sat around the edges of the stage as Alex Newell performed a spirited and roaring “Mama Will Provide.” The production then took this staging on tour.

The musical centers on the story of Ti Moune, a peasant girl who is saved by the gods as a child and yearns to know why. When she encounters a grand homme named Daniel, she prays to the gods, asking them to give her a sign as to why they saved her. After some debate, the gods—Erzulie, Asaka, Agwe, and Papa Ge—decide to send Ti Moune on a journey and discover which is more powerful: love or death.

The gods orchestrate Daniel’s near-death in a car accident with Ti Moune as his sole caretaker. The rest of the peasants refuse to get involved with Daniel, whom they consider to be of another world. As her father, Tonton Julian says, “Even a wealthy man sometimes dies.” Ti Moune eventually heals him, and Daniel is taken back to the hotel his father owns—but not before Ti Moune has fallen in love with him. As she embarks on a journey to follow her heart, the production addresses issues of colorism and classicism, ultimately culminating in a message of love’s capacity to overcome the barriers placed in its way.

The 2017 revival of the production gave it a fresh breath of life through the inspired artistic decisions of director Michael Arden, composer-and-writer duo Stephen Flaherty and Lynn Ahrens, scenic designer Dane Laffrey, lighting designers Jules Fisher and Peggy Eisenhauer, and costume designer Clint Ramos, among many others. For the revival, the staging and context for the telling of Ti Moune’s story was altered to reflect a community recently recovering from a hurricane. The set is primarily composed of sand and a river. Set pieces incorporate found items or waste generated by the hurricane, such as buckets or iron bars, to both immerse the audience into the atmosphere of a recovering community and also create new sonic possibilities in instrumentation. During songs, actors will pick up these objects and play along with the band, adding new layers of sound and diversifying the production’s orchestrations. These objects were also incorporated into the costumes of the characters themselves. The fins that line Papa Ge’s back are made of Coca Cola boxes. Agwe, who controls the oceans, wears a crown made of plastic—perhaps a commentary over the current treatment of his domain.

Every aspect of this production—from its script to its design—is simply unforgettable. The care and attention paid to even the smallest of details add up to an incomparable experience, whether you’re watching from onstage or off. That said, I don’t think I’ll be forgetting the rhythmic thud of the floor under my feet as the actors danced around me anytime soon.