Charles Thomas hugging his mother, Kathy Thomas in December, 2017 at the Ontario International Aiport in Ontario, California. Kathy said this was the last time she hugged her son before he was shot by University police.

Charles Thomas’s mother remembers feeling a bullet under her son’s skin the last time she hugged him.

“If he had been Tased, he wouldn’t still have a bullet lodged in his shoulder and his back,” his mother Kathy said in a recent interview. “They never removed the bullet. It’s still there.”

In April 2018, Thomas, a fourth-year student at the time, was shot by a University of Chicago Police Department (UCPD) officer during a mental health episode his parents believe was brought on by his bipolar disorder. Thomas was found in an alleyway in Hyde Park that night wielding a metal pole and smashing windows. Footage from the officer’s body camera shows Thomas running in the officer’s direction before he was shot.

Thomas was placed under house arrest and charged with three felony counts of aggravated assault of a police officer and five felony counts of criminal damage of property. However, after escaping house arrest during another mental health episode and going missing for two weeks last September, he was eventually found in an Indiana cornfield, and has since been in Cook County Jail awaiting trial. He is now also facing an escape charge.

Thomas’s ongoing case has caused financial and emotional hardship for his parents, upending their lives, they say. Nearly two years after their son’s arrest, they’re wearily awaiting a resolution to the case.

“I’m beginning to think that there is going to be an endpoint to this at some point,” his father, Wendell Thomas, said. “It’s got to be close.”

The hug Thomas’s mother remembers so vividly happened last summer, she said, the last time she saw him before he went to jail. Kathy and Wendell were living in California at the time, and they visited Charles periodically while he was under house arrest in Chicago.

They are both now in the process of relocating to Chicago, in order to be closer to their son.

“I just need to be available to help deal with Charles, and I can’t do all that from California,” his mother said.

Kathy, a third grade teacher, plans to retire by the end of the school year. She said she’s already taken two leaves of absence because of her son’s case, and her time away has affected her students’ learning. Wendell, a nurse, is already in Chicago looking for a new position. 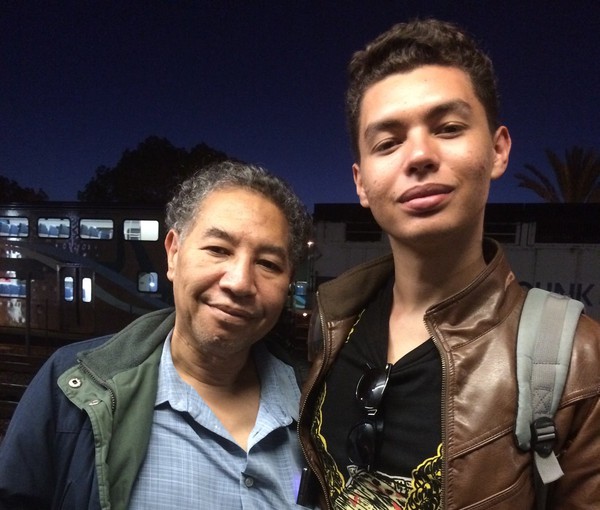 Charles Thomas with his father Wendell Thomas in August, 2015.

Besides relocation, Thomas’s parents have faced other sources of stress over the course of his case.

“Setting up apartments [in Chicago], tracking down lawyers, it’s just constant,” Kathy said. “I don’t think I’ve had a real relaxing day since April of 2018 because it’s always in the back of my mind.”

Another source of stress they face is concern for the quality of mental health treatment Charles is receiving in jail. Kathy said the jail does a good job at making sure inmates take their medication and provides group therapy sessions but fails to provide fresh fruits or vegetables in meals or opportunities for exercise.

“A huge thing with bipolar disorder is, in addition to medication, you need to be eating well, you need to be exercising well to keep everything functioning correctly,” Kathy said. “It’s not the ideal situation.” The condition runs on Kathy’s side of the family and she herself has been diagnosed, she said.

Her concern for Thomas’s mental health has persisted since he was a college student.

At that time, “I was worried, with him, that it would be like it was with me, which would be anxiety and depression,” Kathy said. “So I was watching more for that and talked to him and said, ‘Hey, if you feel any symptoms coming on, you can call us, you can go to student services. Get help, it’s okay.’”

Thomas did reach out to the Student Counseling Service (SCS) before April after what he thought was an anxiety attack, but according to his father he was told they would not be able to treat him on campus and gave him a list of off-campus resources he could try.

His parents did not know about the anxiety attack until some of his friends told them after he had been hospitalized after the shooting, they say.

“Sometimes it’s hard to tell your mom stuff,” Kathy said. “I kind of wish he would have told me, because I would’ve been on the first plane out there and I would’ve flown him home just to check out what’s going on.”

At an event on campus last quarter organized UChicago United, a group composed of different multicultural student organizations on campus, Wendell criticized SCS for not providing on-campus treatment for his son and UCPD for how they dealt with his mental health episode.

“Charles Soji is our only child and has been the greatest joy in our lives,” Wendell read from this statement. “He is not a criminal. He is a kind, intelligent, caring young man who happens to have a diagnosis of bipolar disorder. He needs care, not jail.”

Kathy has also expressed criticism of how the situation was handled by the University and the police. She said the University didn’t reveal everything that had happened in her initial call from them and that she only began to hear the full story while she was travelling to Chicago. In the hospital, she said, she found her son handcuffed to his bed and was only allowed to visit him once very briefly. She also criticized the UCPD officers for not carrying Tasers and for pointing a gun at Thomas during his episode, which she believes only escalated the situation.

In a statement to The Maroon, UCPD said “supporting the safety and well-being of those on campus and within UCPD’s extended patrol area is of paramount importance for all members of the UCPD.” The statement noted that all UCPD officers are required to receive 40 hours of Crisis Intervention Training, training for police responding to incidents involving people with mental health disorders, a commitment “unusual for police departments nationwide.”

UCPD said officers began carrying Tasers last August as part of an update to their safety policies and procedures.

Now, Kathy and Wendell continue to anxiously wait. They were told in 2018 that their son’s case would be settled by late summer, but a series of delays have held it up. Thomas’s next hearing is on March 4, less than a month away from the two-year anniversary of his arrest. Kathy and Wendell say the delays in the case have made dealing with it much more difficult.

Charles Thomas with his parents, Wendell and Kathy Thomas, during Christmas 2018.

Wendell believes had the case been resolved in the expected timeframe, their son’s escape from house arrest in September and his subsequent imprisonment could have been avoided.

“We were living [in Chicago], but we thought it would be resolved within six months. We had a lease on an apartment unit, but that lease ran out so we had him move in with a roommate that we were able to find…. I just wish I could have been here,” Wendell said.

UChicago United began a #DropTheCharges campaign as part of their larger #CareNotCops campaign last December in an attempt to pressure University administrators to get Thomas’s charges dropped.

Kathy said whether or not the University can contribute to dropping the charges, she believes there are still other ways administrators can show support for her son.

“What would go a long way is for President Zimmer and Dean Rasmussen to write letters of support for Charles to the judge or the prosecutors, which we’ve asked for and basically they just won’t,” Kathy said.

If Thomas can get released soon, his parents hope to take him back to California to be with family and support him in his desire to return to school and finish his college degree. While a fourth-year student at UChicago, Charles had been planning to spend a year working on archaeological digs after graduation, before eventually pursuing a doctorate, the Chicago Tribune reported.

However, when Thomas’s move home may happen becomes more uncertain as the case progresses.