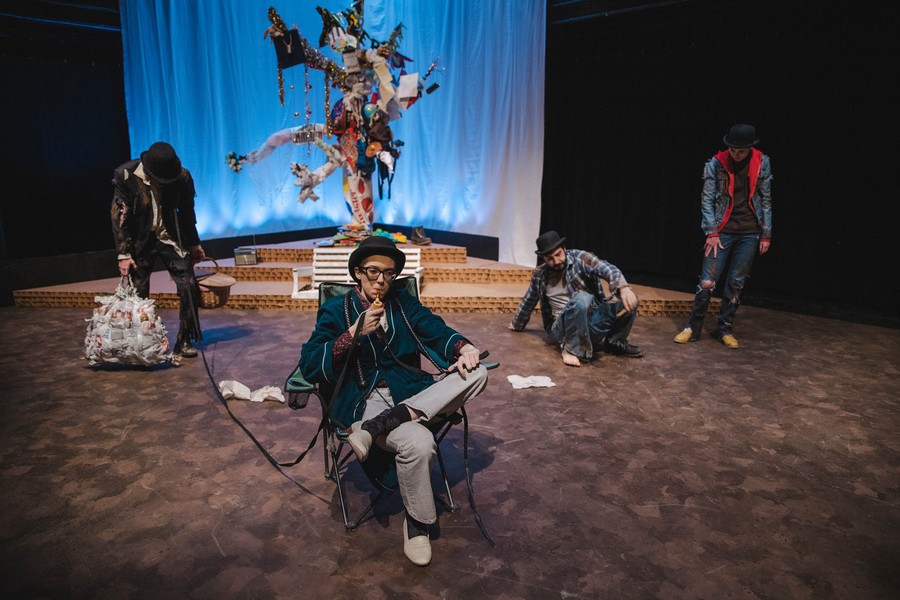 “That’s the idea, let’s abuse each other!” Estragon (David Silberthau) declares. And so the hurling of insults commences.

Wait…was Vladimir (KD Bevil) looking right at me when Estragon said “Critic”? (I asked KD afterwards. He was.)

Samuel Beckett’s 67-year-old tragicomedy Waiting for Godot is near-ubiquitous in the theater world. This strikes most people as odd given that, as Vivian Mercier once put it, this is a play where nothing happens…twice. Vladimir and Estragon wait for Godot, and—spoiler alert—he never shows. Yet, the play has remained popular to the point that it was once voted “the most significant English language play of the 20th century.” It is safe to say this is a play that defies casual criticism—its conceit is literally the title, so you know what to expect when you see it. And if you find it boring, well, don’t see it.

Perhaps I, a playwright who dabbles in theater criticism, am not qualified to review this play. After all, a critic once complained about a play I wrote, arguing that it faltered in its conception and execution. But then again, that same critic said my play lacked a lot of action between the characters, which in some ways makes me extremely qualified to review Waiting for Godot, simply because there’s literally no action at all.

Full disclosure: I’ve never really liked Waiting for Godot. I first saw a production of it six years ago on Broadway starring Patrick Stewart and Ian McKellen, but for the longest time, the reason for its endurance eluded me. Even now, I think it’s an example of an old play written by a white playwright, firmly rooted in a theatrical past that theater companies seeking to break the mold should move on from, partly because it’s so hard to do anything new with it (lest you get in trouble with the Beckett estate). That was on my mind for most of this production: Sure, Bevil and Silberthau’s chemistry was charming, Carlos Garcia Martinez’s Pozzo brought some engaging charisma to the proceedings, and there were multiple points in the show that were just downright hilarious. However, it’s hard for me to understand why this show continues to get produced so much.

It was only about halfway through the second act when it finally dawned on me: The audience is on exactly the same page as Vladimir and Estragon for the entire play. They don’t know where they are, they don’t know who these people are, and they don’t know when or if Godot will arrive. In most plays the audience won’t know what’s going on, but the characters will fill them in on all the details. But in Godot nobody—neither our main characters, nor the interrupters Pozzo and Lucky (Geoffrey Baring)—really know what’s going on. For everyone involved, that’s terrifying.

And under Robert Carhuayo’s direction, boy did this production play up the terror.

The aesthetic of this production evoked a post-apocalyptic setting, one that Tess Gundlah’s costume design suggests has a hierarchy, judging by the tattered clothing of the protagonists in contrast to the Boy (Marc de Fontnouvelle), who, in an inspired choice, wears light-up sneakers. Sound design by Gigi Hancock leaned heavily on static and the occasional song from the ’30s that sometimes emerged without prompting from an onstage radio, adding to a sense of unease that I would not have normally expected from Godot. Central to the aesthetic was Melaina Leung’s set design, the centerpiece of which was a tree built from discarded items so intricately detailed that audience members came down to inspect it during intermission and after the performance. Discarded items that stood out to me included a hospital badge and a Hungry Hungry Hippos game.

Towards the end of Act I, Estragon asks Vladimir how long they have been together. Vladimir responds, “I don’t know. Fifty years maybe.” It has, in fact, been nearly 70. There have been hundreds of productions—thousands, maybe—of Waiting for Godot, yet this production takes a unique approach to old material in a way that really sticks with you. That’s why this play has endured for so long: Despite its length and relative lack of action, it stays with you long after you’ve left the theater.

And let’s be honest, what more could you ask for from a student production?