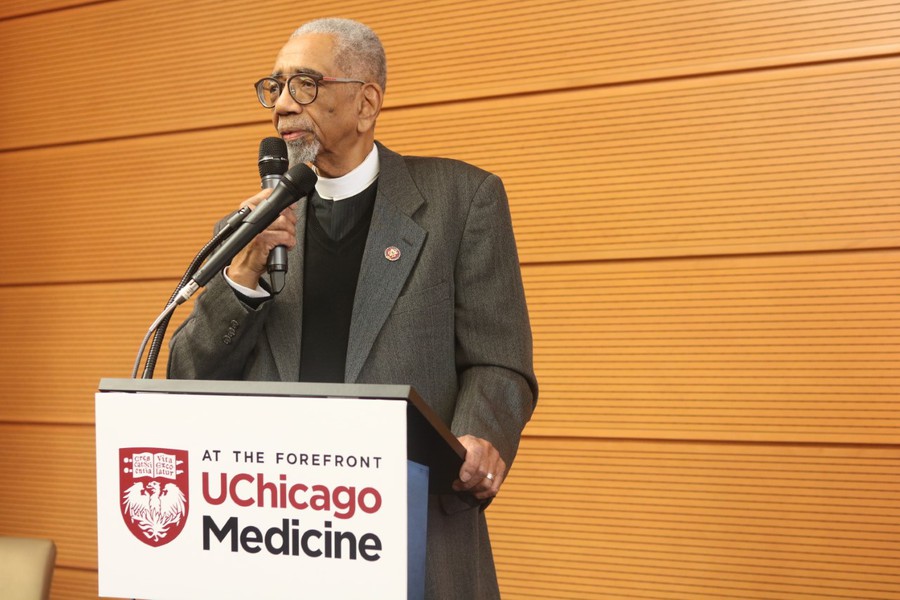 The University of Chicago Medical Center hosted an event to discuss Illinois’s Clinical Trial Participation Act, a state-wide legislation that aims to increase participation of low-income populations and communities of color by allowing reimbursement for out-of-pocket patient expenses in cancer clinical trials.

Kenneth Polonsky, Executive Vice President for Medical Affairs at UChicago, opened a press conference on Monday where he expressed the need for clinical trials in advancing medical treatments. “Clinical trials are absolutely essential if we are to advance medical care, and particularly if we are to translate basic science discoveries into advances in either diagnosis, treatment, or prevention of disease,” Polonsky said.

“For patients who have been fighting cancer for a while, they are spent in every way—emotionally, physically, spiritually, and, in fact, financially,” Dornsife said. “That aspect of financial toxicity really enters into their ability to access medical breakthroughs in cancer clinical trials.”

According to a 2015 study from researchers at the Fred Hutchinson Cancer Research Center, low-income patients earning less than $50,000 are 32 percent less likely to participate in clinical trials than patients earning more.

Dornsife said that low-income communities of color are often left out of cancer clinical trials, meaning that possibly life-saving drugs are not thoroughly researched in those populations.

By allowing financial support for patients, Dornsife said, the bill removes the barriers to treatment for historically medically underserved populations, so that participants in clinical trials will more accurately reflect the population as a whole, “[translating] to equal drug development and access for all cancer patients regardless of their socio-economic standing.”

Congressman Bobby Rush, who serves Illinois’s first congressional district, reiterated the need to widen the pool of participants in cancer trials. Rush, himself a cancer survivor who was treated at UChicago Medicine, said he was emotional to see the signing of this bill in his home state, saying that many Americans are unable to receive breakthroughs in medical care available through clinical trials.

Rush called the lack of access a double-edged sword, where patients are unable to receive potentially life-saving treatments and pharmaceutical companies are unable to collect data on how treatment interacts with more individuals in the general population. “Cancer does not discriminate, and the Lazarex Foundation is making sure that in clinical trials there is no discrimination also,” Rush said.

The Lazarex Cancer Foundation facilitated this legislation by first pushing the FDA in 2018 to change national guidelines to allow for patient reimbursement in clinical trials. Then, according to Dornsife, the foundation approached Rush last June to work on Illinois legislation allowing patient reimbursement. The bill then moved into the state legislature and was unanimously passed in both chambers.

Dornsife thanked Illinois House Speaker Michael Madigan for his efforts in the quick passage of the bill.

Going forward, according to Dornsife, the Lazarex Cancer Foundation is working on a partnership with University of Chicago Medicine and Northwestern Medicine to support a program that helps provide cancer clinical trial patients with financial support during their treatment. The foundation is currently looking to secure funds for such a program.