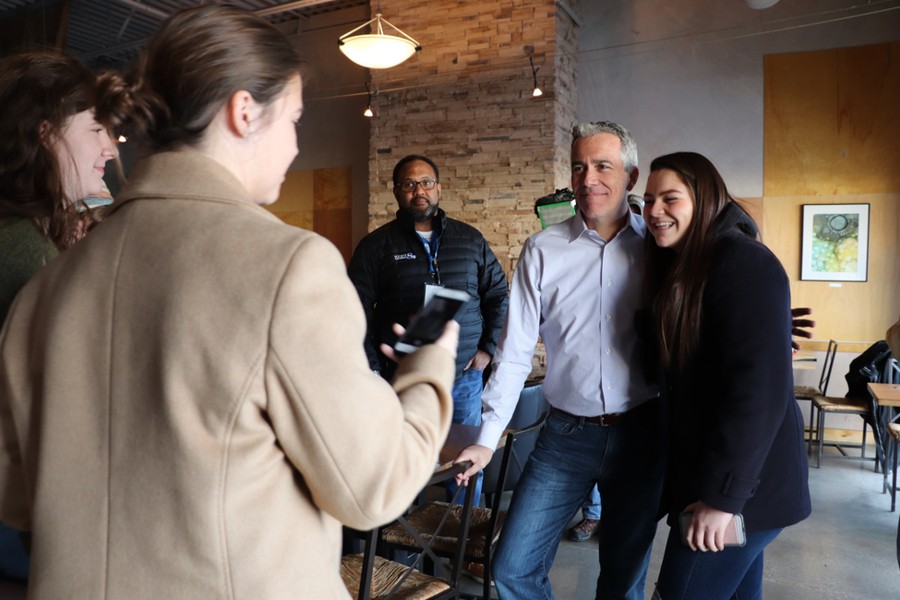 The former representative discussed at length his status as a Republican defector, saying he isn’t sure “how long [he’s] going to be a Republican,” before launching into an appeal for a younger, more diverse GOP and touting his time representing “the South Side of Chicago.” As a representative, Walsh represented Illinois’s eighth congressional district, which covers part of Cook County, and spent part of his pre-politics career as a social worker with the Chicago-based Jobs for Youth.

Walsh’s message this morning contrasted heavily with past remarks he made as a member of the Tea Party. As a prominent conservative radio host, he frequently made comments about former president Barack Obama, including the assertion that Obama only won the presidency because he was Black. Walsh has since expressed regret for those comments.

A number of college students from Kansas’s Benedictine College were present to hear from Walsh. Many wished he had a better chance at the nomination and said they would vote for him if they thought he could successfully challenge the president.

Benedictine College third-year Rafaela Perez, who calls herself a “never Trump” voter, was one of that number. Perez, who was sporting a vintage button from the 1968 Barry Goldwater campaign and said she thought she would be a “lifelong Republican” in a party dominated by figures like Utah Senator Mitt Romney and Arizona senator John McCain. But she did not believe that any Republican candidate would be able to unseat Trump.

“It would take…something from God happening in order for Trump to not be the nominee. Impeachment didn’t even shake his nominee status. The Democrats are going to be the way we get out,” Perez said.

Perez and Emily Sanderlin, another Benedictine student, thought “it would be great” if Walsh had a dark horse moment and toppled Trump, but acknowledged that it would be nearly impossible. In light of this, both students said that they were behind Democratic senator Elizabeth Warren.

Unusually, Sanderlin cited her pro-life stance as the source of her support for Warren. Ordinarily, those who consider themselves pro-life would oppose Warren’s viewpoint; the Massachusetts senator is an enthusiastic supporter of the Supreme Court decision Roe v. Wade, and touts her plan to make Roe the law of the land even in the event that the increasingly Republican-appointed Supreme Court reverses that decision. Sanderlin and Perez were aware of this and said that because they did not expect Roe to be overturned, they were focusing on the quality of a human life post-birth.

“If you’re not taking care of people, if you’re focused on getting them born, if you leave them in the system, not being taken care of in foster care, not able to be adopted…. It’s a whole life [of] worry,” Perez added.

Walsh’s anti-Trump message resonated with Olivia Ortiz, a Benedictine College student and undecided voter. “What he has to say is what I’m thinking: This is not my Republican party. [Trump] isn’t who I want as the leader of our party,” Ortiz said. “So, I agree with [Walsh] on that point. I think that he could be a really good person to change what goes on in our party.”

Ortiz, a registered Republican voter, said that she was disappointed by how Trump claims to represent her conservative views, adding that she was frustrated by Republicans’ tolerance of his remarks. “He takes the intellectualism out of our party. He makes us look like idiots…. He just says everything, and then we forgive him for everything. And we can’t do that,” Ortiz said.

Like Walsh, Ortiz said that she would strongly consider voting for a Democrat over Trump, even if it meant casting a vote for someone who doesn’t perfectly reflect her ideology.

“I’m tired, I’m outraged, and so I’m ready to vote for somebody else, even if I don’t agree with them on everything. Because, look, there’s never going to be a candidate you agree with on everything. But I agree more with a lot of the Democrats than I do with Donald Trump right now.”