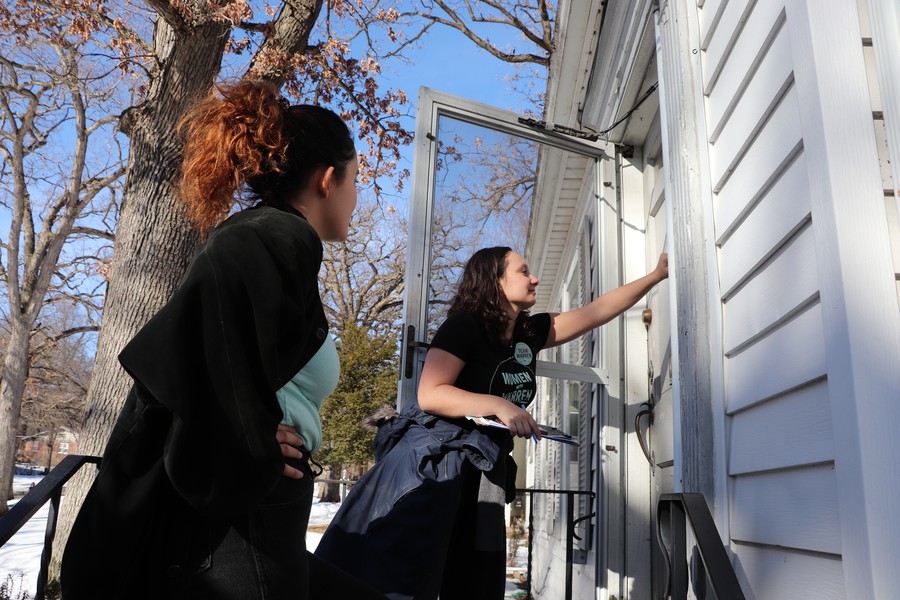 DES MOINES, Iowa: Third-years and UChicago for Warren organizers Celia Hoffman and Sofia Cabrera hit the pavement this afternoon from noon until 5 p.m., knocking on nearly 100 doors in the suburbs of Des Moines in hopes that Warren will emerge from the caucuses with a so-called “ticket out of Iowa.”

The duo logged their progress throughout the afternoon on “MiniVAN,” an app that Democratic campaigns use to coordinate their door-to-door canvassing. After every conversation, they marked whether the voter was still undecided, supported another candidate, or had verbally committed to Warren.

In a conversation with one undecided Iowa voter, Hoffman characterized Warren as a candidate with middle-class priorities.

“She has plans for what she wants to do after Donald Trump is out of office… [to] really try to level the playing field for America's middle class, for folks across the country, not just New York and Washington insiders,” Hoffman said.

Hoffman closed her pitch to the voter with a call to action and an emphasis on the important role Iowans play in the nomination process.

“We think she can win, we think she will win, and that all starts here in Iowa. So, we’re counting on you to turn out for her,” she said. The voter, who was initially undecided, seemed to lean towards Warren by the end of the encounter.

Cabrera told The Maroon that the campaign takes a personalized approach to canvassing, focusing on individual connection between the volunteer and voter rather than broad-strokes messaging.

“A lot of Warren's campaign is really focused on relationship-building and on relational organizing,” Cabrera said. “The volunteer shares their personal story and why they’re involved with Warren, and wants to connect with the caucus-goer.”

Cabrera added that the issues that take front and center during an encounter depend on “who's knocking whose door.”

“The conversation is supposed to be a personal dialogue about what issues matter most to each person. Hopefully, that inherent passion is enough to get them on Warren’s side,” Cabrera said.

The canvassers’ goals have evolved since the summer, when she was working on the Warren campaign through the Institute of Politics’s Iowa Project.

“Earlier in the summer, when we were doing door-knocking, it was more listening to voters on what issues mattered to them and recording that,” Cabrera said.

Now that the caucuses are so close, the canvassers take a more “persuasive” approach, seeking to win over voters’ support and “get out the caucus.” Canvassers also remind Iowans of their precinct location and ensure that voters have transportation or childcare arranged for the evening of the caucus.

Hoffman told The Maroon that she’s been committed to Warren from the very start of her campaign.

“I’ve been a Warren supporter since day one, December 31st, 2018, when she announced that she was starting her exploratory committee,” Hoffman said.

Hoffman also said that Warren won her over during the legislative fight over the Affordable Care Act that erupted following the 2016 election of Donald Trump.

“I saw her on the front lines, fighting that fight, both as an activist and as a legislator. And I really clicked with how she talked about issues, how she spoke to the way that Americans need everything from health care, to student debt,” Hoffman said. “She brought me a deepened love of politics.”

While Cabrera agreed with Hoffman on many of the reasons to support Warren, she also had a lighter rationale. “Half of the reason I support Warren is because she has a dog,” Cabrera said, referring to Warren’s golden retriever Bailey, as she petted one voter’s energetic pooch.