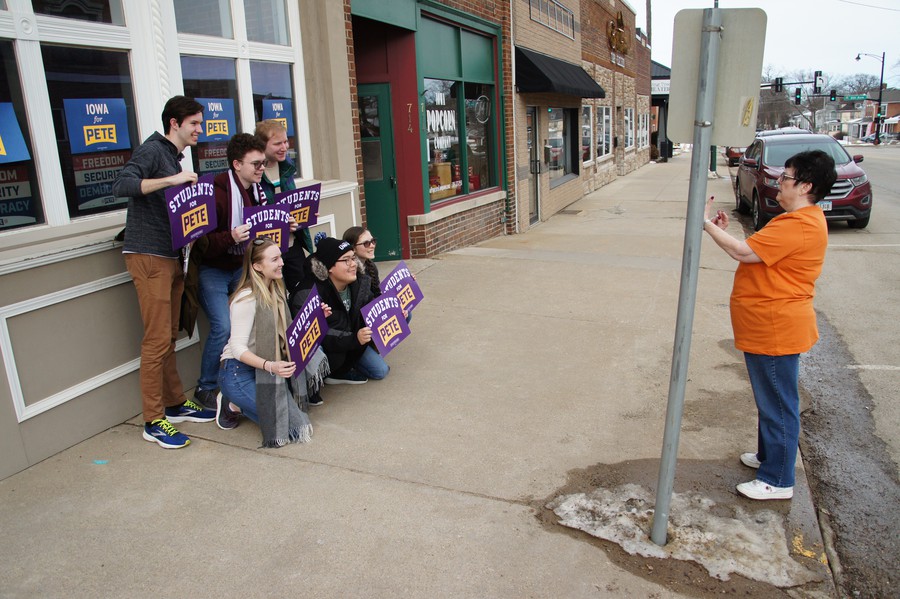 NEWTON, Iowa: It was a long weekend of driving and door-knocking in and around Newton, Iowa, for the members of UChicago for Pete. Technological difficulties with a data app used by the Iowa Democratic Party mean that it is still unclear whether their candidate, former South Bend, Indiana mayor Pete Buttigieg, will prevail in the state’s caucuses, which took place on Monday night.

The former mayor is currently in the leadwith 26.7 percent of state delegates, narrowly edging out Vermont Senator Bernie Sanders, who has 25.4 percent. So far data has come in from 86 percent of precincts.

While the Iowa caucuses do not always determine the Democratic nominee for the presidency (Bill Clinton notably lost the 1992 caucuses to Senator Tom Harkin and went on to win both the nomination and the general election), it is generally considered an important indicator of a candidate’s viability.

An early victory would be especially meaningful for Buttigieg, whose comparatively weak support among Blackvoters poses a likely obstacle for the candidate during the early February 29 primary in South Carolina.

In a January interview with The Maroon, Austan Goolsbee, an economics professor at the University’s Booth School of Business and a former chair of the Council of Economic Advisers, said he believes the early-state strategy that propelled Barack Obama tovictory in 2008 could do the same for Buttigieg. UChicago volunteers for the campaign were optimistic as well in the lead-up to the event.

“I’m feeling great,” first-year Jacob Sher told The Maroon on Monday morning. “I think we’ve done everything we could. We had an awesome pep talk last night and I think everything’s going to go really well today.”

Sher, along with first-year Olafur Oddsson Cricco and second-year Laura Duffy, traveled 70 miles south of the Buttigieg campaign’s office in Newton to Ottumwa, a city of around 25,000 people. The trip was a last-minute bid to ensure that its residents come out to caucus in support of Buttigieg.Lora Sundquist, a Pete staffer in Ottumwa, said that the campaign had 10 other canvassers working in the town in a final attempt to turn out caucus-goers.

As a precinct captain for Buttigieg, Sundquist was responsible for addressing caucus-goers tonight to make the case for the former South Bend mayor and persuade them to gather on his side of the caucus site.“I’m just going to talk about how Pete has affected me personally, how I think he is the one to beat Trump because he’s a total opposite,” she told The Maroon. “He’s more of a moderate progressive.”

Responses to door-knocking during the day wererelatively few and far between, likely because many residents were at work. Those who did respond tended to be older. One such Ottumwa resident was Toni Welch, who was a fan of Buttigieg, though she’s still deciding between him and Massachusetts Senator Elizabeth Warren.

“I don’t think Medicare for All is really workable,” she said, “but I think something has to be done to the Obama policy, because it’s not really working very well anymore.”

Welch said she was leaning towards the 38-year-old Buttigieg in part because of his youth.“I’d like somebody fresh and young,” she said.“Young’s important. Even though I’m old, young is important to me.” Steven Peters was also home to answer UChicago for Pete’s knock, but said he planned to caucus for former Vice President Joe Biden on the basis of electability.

“He’s a little more down the middle than the rest of them,” he told The Maroon, adding, “I think he’s got a better shot.”

Peters acknowledged that his vote has more to do with the current president than any of Biden’s policy proposals.“I just don’t want to see trouble for four more years. I just can’t take it,” he said. “So it may mean that I’m voting more against [Trump] than I am for Biden.”Both Welch and Peters said that they would vote for the Democratic nominee, no matter who it is.

“I think it went pretty well,” Oddsson Cricco told TheMaroon, “considering that it’s a Monday and most people are at work.”

Sher agreed, but Duffy had a somewhat different experience.

“A lot of the folks that I ran into who liked Pete couldn’t go out because of mobility issues,” she said.