At a symposium, Phoenix Survivors Alliance debuted an art installation of jackets lost at fraternities as a metaphorical medium to tell stories of what sexual assault survivors have lost. 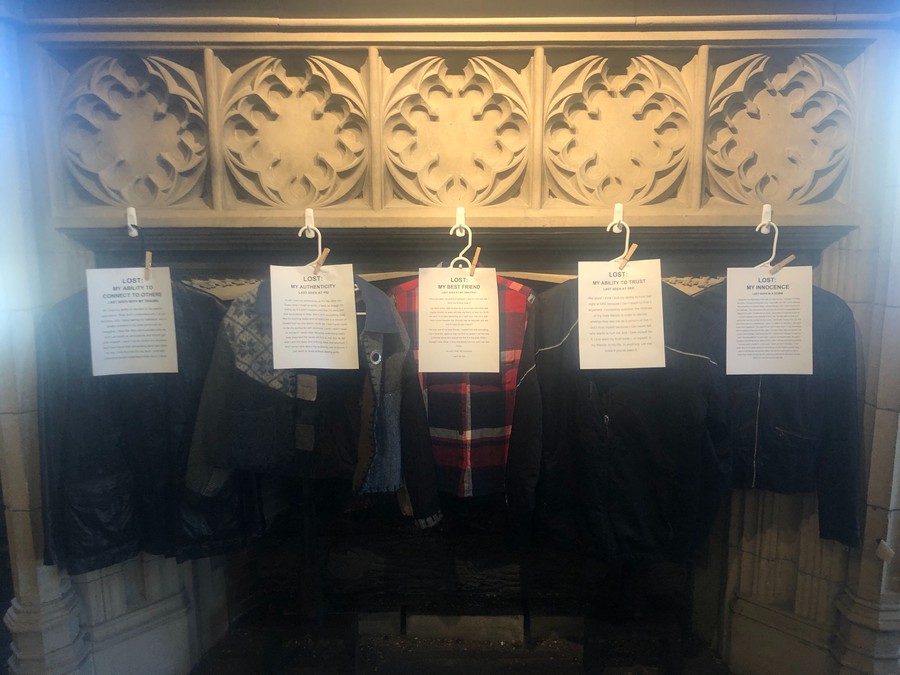 The "Lost, Not Found" art installation was unveiled at the Phoenix Survivors Alliance Symposium.

The campaign has started an Instagram page to share photos of donated jackets with survivors’ stories told in the comments. At the Phoenix Survivors Alliance (PSA) biannual symposium on February 29, the jackets and stories from the Instagram account were displayed in an art installation in Mandel Hall.

Kumar and Lo, both sexual assault survivors and members of PSA, got the idea while having breakfast together. When they received a notification from the UChicago Lost and Found Facebook group about a jacket lost at a fraternity, Lo responded, “Lost my sense of security at a frat.”

While presenting the installation at the symposium, Lo said, “At frat parties, we lose physical jackets; we often lose physical items of clothing. But we also lose other things at frat parties: We lose our sense of security, we lose our self-esteem, we lose our sleep, we lose our trust. We lose so many immaterial things at these parties, and they are never talked about.” In a separate interview with The Maroon, Lo elaborated, “How many Canada Gooses could I steal to make up for what I had lost? We started thinking about the economics of a frat party and other spaces where assault happens: What is given or taken and what is compensated in return? The answer is, not much is compensated,” Lo said.

Kumar and Lo started to think about using the jackets as a way to raise awareness for the frequency of assault on campus and the recurring losses survivors experience. The two reached out to PSA for help launching the social media campaign and publicizing the project. The aim of the platform is to draw attention to the frequency of attacks on campus and create a system of accountability.

“It’s important to still recognize, at least in my experience, what had happened as assault to make sure that that person was accountable for the violence they enacted on my body, my mind, my self,” Kumar said. She and Lo emphasized the need to raise awareness of the frequency of assault, “to be able to create a space like that on a digital platform, to not only show the frequency of which these feelings are felt and things are lost, but to be able to visualize and see the numbers of them.”

After their first day posting from the account, which was originally intended only to share stories collected from members of PSA, a friend of Kumar and Lo asked for her own story to be posted. That same day, after creating an anonymous Google form, four more submissions came. “Lost, Not Found” now has 16 stories up, 11 of which came from anonymous submissions.

Kumar and Lo believe that the account’s popularity arises from its anonymous nature that creates an outlet for survivors to tell their stories and feel that they are not alone.

In many of the submissions, survivors have highlighted the difficulty of finding mental health counseling through the University and in finding safe spaces to have fun on campus, especially as fraternities are a hub for social life. As well as communicating survivors’ stories, “Lost, Not Found” hopes to open up a discussion about how campus culture is conducive to assault and ways the University’s Student Health and Counseling Services can better provide resources for survivors.