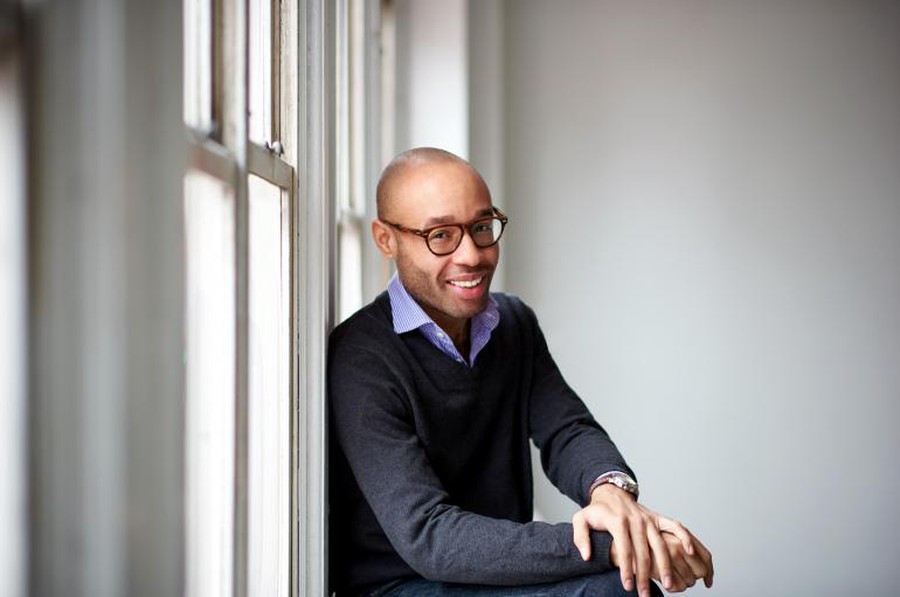 Aaron Diehl builds the bridge between jazz and baroque in a scintillating talk and performance.

On February 20, American jazz pianist Aaron Diehl joined music professor Jennifer Iverson for A Listening Session with Aaron Diehl. Members of the Hyde Park and Woodlawn community, including UChicago students and staff, gathered in the Logan Center for a glimpse of the brilliance of American jazz. The two engaged in thoughtful discourse about the roots of jazz and classical music, and how this history relates to Diehl’s understanding of his vocation as a professional musician. Diehl shared his insights about the roots of jazz instrumentals and the genre’s relationship with Baroque and classical themes, lauding specific groups such as the Modern Jazz Quartet (MJQ) to illustrate how the combination of instruments in a piece can allow for the unique development of a composition.

Diehl discussed MJQ members John Lewis, Percy Heath, Kenny Clarke, and Milt Jackson and one of their songs, titled La Ronde Suite, while focusing on the influence that piano, bass, vibes, and drums play in the division of the composition. Iverson reflected on the compositions’ kaleidoscopic variations, comparing this melodic configuration to giving four people the same ingredients and saying, “Make something out of this.” Diehl agreed, adding, “John Lewis’s version is different than Percy Heath’s version is different than Milt Jackson’s version, right? And they’re all using the same ingredients, but they’re really foregrounding [many] different elements and shaping the tune in [many] different ways.”

Diehl acknowledged Clarke as a major contributor to the puzzle-like complexity of composition and its implications on later iterations of the MJQ, as in the case of his utilization of the bebop style drumming. While Clarke wanted to play bebop, however, Lewis was tending toward a more refined classical trajectory. These differences ultimately led to Clarke's departure from the group. Later versions, with Connie Kay playing drums in place of Clarke, had a "very different sensibility," Diehl said.

During the listening session, Diehl masterfully riffed on the piano to demonstrate different trends in topical jazz music, including Bag’s Groove, which showcases the blues sensibility embraced by Milt Jackson, and “the circle of fifths,” which Diehl described as a signature element in Baroque music.

Diehl then examined the relationship between the MJQ and Baroque music. MJQ’s album Blues on Bach exemplifies this dynamic: Newly composed blues tunes in various majors are interrupted by Bach arrangements on the record. “You have these pieces that are by Bach that are re-orchestrated for the MJQ and then, against that, you have these blues,” Diehl said. “You have blues against all of that. Blues on B-A-C-H. And it’s a really nice balance. It’s like a game of ping-pong going back and forth between these two effects.”

Iverson continued this discussion by questioning whether MJQ fits within the somewhat controversial concept of “third stream”—a theory posed by composer Gunther Schuller which suggests a style of music can synthesize jazz and classical music—and the cultural response to this kind of composition. Diehl emphasized that the dichotomy that many people take issue with concerns the class roots of each form of music. Paraphrasing Austrian composer Friedrich Gulda, he said that classical music was supported by European aristocrats, while jazz music emerged from the Black experience. “We should be aware that we are litigating other issues around class and race and so on, at least implicitly, when we talk about the tension between these two ways of doing music,” Iverson said.

Concluding the seminar, Diehl performed a Lewis composition, Milano, which Diehl included in his most recent album, The Vagabond. This MJQ-inspired piece complemented many of the themes examined during the listening session, such as the circle of fifths.

Diehl said he wanted The Vagabond to capture his creativity as a musician. “I wanted to be, maybe, more experimental with my composition and not necessarily have a set agenda in terms of content,” he said. “I did want to have a certain kind of sound, one that was certainly more intimate—inside the ensemble, one that was exploring more color and different types of textures.”

Diehl traces his musical lineage back to Columbus, Ohio. Growing up as someone inspired by the arts, Diehl believes that his passion for what he loves has gotten him to his current point in his career. “It all comes down to having a deep desire and love to do something, and music has always been that for me. It sort of chose me,” Diehl remarked. “I didn’t choose it.… The magnetism of music really just, kind of, was just a beam that drew me in. I haven’t looked back since.”

An earlier version of this article incorrectly stated that Lewis left MJQ, while it was in fact Clarke who left. This is a corrected version.