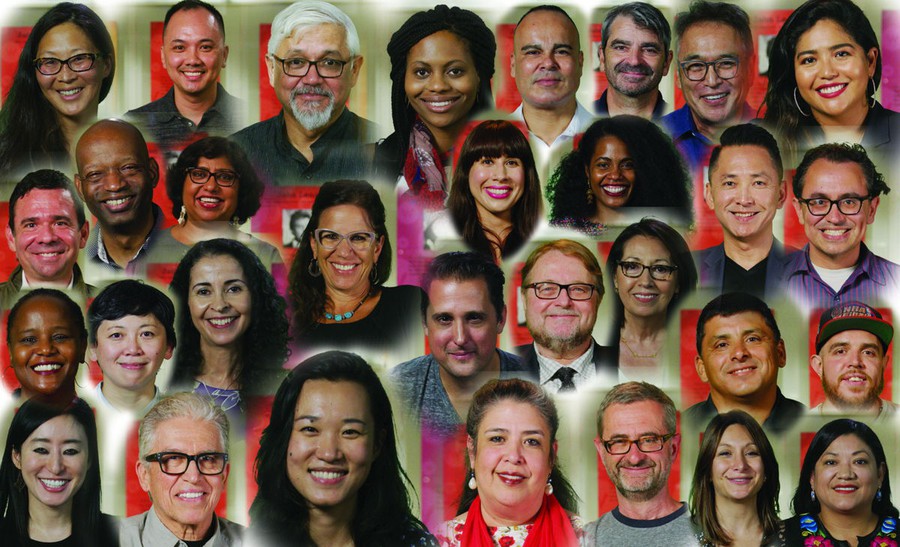 30 contemporary immigrant and refugee writers tell their unique stories in "My America," on view through May 2021 the American Writers Museum.

How do we frame the narratives of migration experiences? And how do language and migration shape selfhood and identity?

These questions surface from the American Writers Museum’s latest temporary exhibit, My America: Immigrant and Refugee Writers Today, in which visitors are invited to listen to interviews of over 30 contemporary immigrant and refugee writers on topics ranging from their own writing processes and influences to their conceptions of home and language.

Most striking about the exhibit was its impulse to simultaneously connect and differentiate each writer’s answer. When writing becomes institutionalized and marketable, there is incentive to categorize it. However, the video interviews of My America resist generalizing a “typical” immigrant story in favor of localizing their narratives through personal anecdotes and nonlinear storytelling. This unique form of narrative-building makes the exhibit vast in scope and successful in delivery.

The most varied responses took form in the “othering” and “duality” sections of the exhibit. Writer and sociolinguist Dipika Mukherjee commented on the pressure she felt as a minority writer to represent an entire culture, and the feeling of imposter syndrome she encountered as the only non-white writer invited to speak at a panel. She described herself as a “global humanist,” refusing labels such as “American” or “Indian.” In a separate clip, novelist Dina Nayeri spoke almost as if in conversation with Mukherjee, complicating the question about duality and its binary construction: “We are all a multiplicity. We’re not just two of anything…. Duality is part of the problem.”

Others, of course, differed in their answers. Marie Arana expressed her ever-present anxiety of never being 100 percent Peruvian or 100 percent American. Viet Thanh Nguyen spoke of duality as a nationwide problem rather than an individual one. R. O. Kwon quoted Franny Choi—that on first encounter, people see bodies before they see humans—stating it encapsulated the constant reminder she is a woman, but not necessarily Korean-American.

Curious as to how the exhibit was curated, I spoke with Vu Tran, director of undergraduate studies for UChicago’s creative writing department, who served as one of seven members on the exhibit’s advisory committee. The advisory committee discussed potential featured writers and how to frame the exhibit at monthly meetings. According to Tran, the most difficult part was titling the exhibit, as the last thing they wanted to do was tokenize or “other [them]selves” through the framing of the exhibit. Mindful of the ways in which language shapes how we perceive experience, the advisory committee workshopped several names before arriving on My America.

Save for a brief chronology of immigration policy on the wall, there was little discussion of the current or past administration’s responses to immigration. When asked if this political context warranted more attention, Tran called it the “unspoken shadow of the exhibit.” My America serves as a response to both new and old dialogue surrounding immigration policy.

“But I don’t know how it would have been done,” Tran added, when asked about how the museum could have more precisely situated the exhibit in our current political climate. This exhibit is not a critical look into the long history of our country’s response to immigration, nor does it masquerade itself as one. Rather, it serves to affirm and to humanize the politics which the dialogue surrounding immigration can often misrepresent or essentialize. Taken on its own terms, the exhibit presents a complex understanding of what “American” means.