Despite technical difficulties and cheesy set layouts, Saint Motel thrilled their audience with an overflowing, whimsical energy at the Vic. 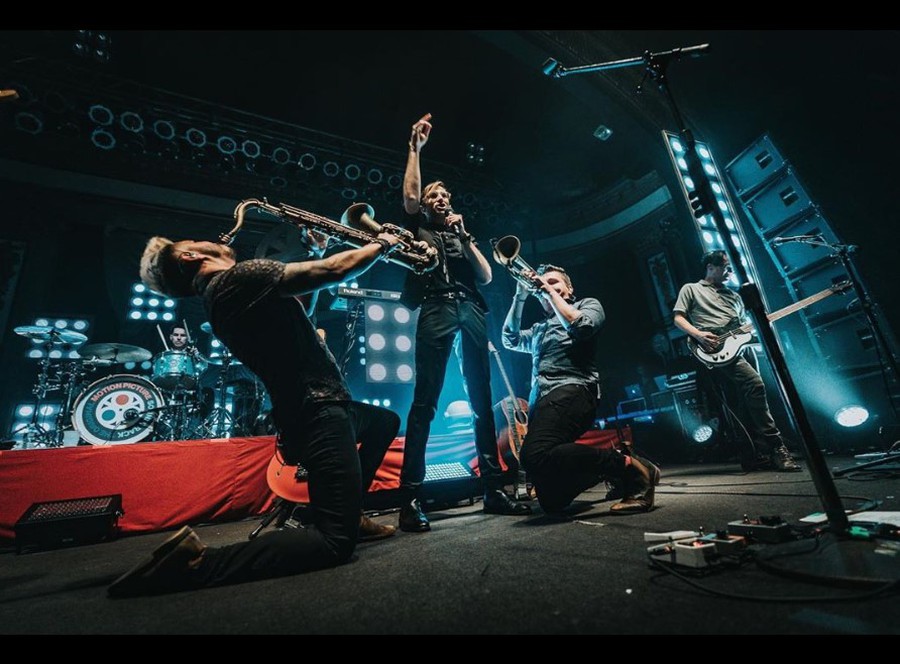 The band was self-aware of the set’s silly layout, goofing around with audience members and each other as the night progressed.

The last vestiges of Chicago’s infamous winter did little to deter a sold-out crowd from congregating at the Vic Theatre to watch Saint Motel. And the Los Angeles-based indie pop darlings put on quite the show last Thursday, overcoming a slew of technical difficulties to put on a performance full of sunshine and carefree abandon.

Right from the start, KOLARS, the night’s openers, foreshadowed the many cinematic allusions to come. Composed of husband-and-wife duo Rob Kolar and Lauren Brown, KOLARS brought glam sensibility to the Vic, bedecked in sequin costumes and flanked by large LED panels. Although Kolar possessed infectious front man energy as he bounded up and down the stage, it was Brown who single-handedly stole the show—her novel drumming style, where the hi-hat in a standard drum kit is replaced by her tap dancing on a platform, was truly something to behold. It was a performance that was equally stunning and sensual in its execution, drawing a strong response from the crowd.

The loudest cheers of the night were nevertheless reserved for the moment Saint Motel finally came on stage, dressed in identical bomber jackets and backed by the Jurassic Park orchestral theme. This was the first of the night’s many pointed allusions to the band’s latest EP, The Original Motion Picture Soundtrack: Part 1. Indeed, to watch Saint Motel live is to participate in a visual as well as a musical experience. In keeping with the cinematic theme of the set, lead singer A. J. Jackson emerged from the flanks in a coat while carrying a lantern, as a disembodied narrator recounted a story of a resurrected polar explorer in the frozen depths of the Arctic. This was the tacky setup to the band’s opening song, “Cold Cold Man,” performed with rolling landscapes of icy mountains projected onto LED panels behind them.

Unfortunately, the band’s evocation of their EP’s cinematic theme lacked in both cogency and originality for the rest of the set. Predictably, 2009’s “Dear Dictator” was preceded by a trite narrative about some abstract totalitarian regime’s rise to power, while Jackson strutted back onstage wearing military garb—complete with peak cap and lighted torch. The narratives were disjointed and seemed to point to no greater concept other than the fact that Saint Motel’s new music possessed some vague cinematic quality. This was not helped by the poor sound mixing at the Vic. The narrator sounded garbled, often to the point of incomprehension, while Jackson’s mic was always just a touch too soft, drowned out by the bass and a very exuberant brass section.

Not that anyone was too fussed—the band was self-aware of the set’s silly layout, goofing around with audience members and each other as the night progressed. Dressed in an astronaut suit during a narrative interlude about space travel, Jackson reinvented the concept of "crowd surfing." He mounted a giant inflatable raft that the crowd passed along, all while a crew member sporting an alien mask and a Bulls jersey threw glow sticks at the audience. And—save from several loud men who aggressively yelled at the poor sound technicians to turn the mix up—the crowd loved every second of the set. Standout singles such as “Move” and “Puzzle Pieces” kept the crowd moving in earnest all night. In this sense, choosing their breakout 2014 single “My Type” as the encore song was an inspired move in many ways, encapsulating the very best of the Saint Motel live experience—Jackson vaulted into the balcony box seating area and commanded the crowd to jump up and down with the beat, which they duly did.

Saint Motel didn’t need to be perfect to leave a lasting memory at the Vic. There was even time for a lovely homage to the audience, as the band invited KOLARS back on stage to perform an energetic cover of Sufjan Stevens’s “Chicago.” This was a band that was more than willing to come across as cheesy, that cared first and foremost about having fun. And what more could a crowd ask for from a live set?