A Reprieve From Chaos With Dayglow 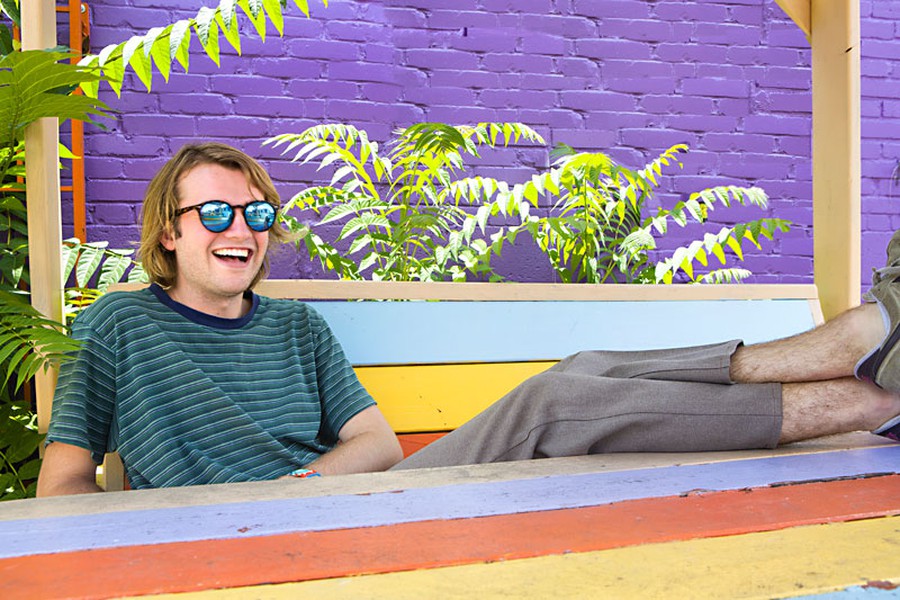 Sloan Struble and his band played at Shubas Tavern

Seeing Dayglow live was the last thing on my mind. I juggled packing and storing all my belongings, attempting to study for finals that were mere days away, and worrying about getting home in the middle of a pandemic. Going to the concert seemed irrational; while social distancing and shutdowns hadn’t been instituted yet, I felt some reserve about being in a crowded area. Truth be told, I almost stayed in my dorm, preferring to wallow in the chaos rather than pretend to enjoy myself.

Walking into the venue, I still had my doubts. Inside Schubas Tavern’s concert space, I was greeted by a relatively simple stage design that featured silvery-blue streamers. The band’s name hung across the stage in big, colorful letters, with a smiley face adorning the “O.” The opening act, Ritt Momney, took the stage shortly after I arrived, delivering a lowkey and trance-like set as the crowd swayed to each song.

Then, in true Dayglow fashion, band members Nate Davis, Nico Fennell, Eric Loop, Brady Knippa, and lead singer Sloan Struble took the stage via a hilariously coordinated dance while rainbow lights flashed above them. Each member had a solo moment, with Struble bringing up the rear in his custom-made band jacket—complete with fringe, of course. From there, the band launched into “Hot Rod,” one of the more upbeat features from their debut album, Fuzzybrain (2018).

While the concert certainly had its lively moments with favorites like “Nicknames” and “Fair Game,” the band also highlighted Fuzzybrain’s slower offerings. In one such moment, Struble spoke about the album, telling the audience that, at its heart, the album is about change. He’d penned these songs during a time of change in his life.  As the group dove into songs like “Dear Friend,” the words took on a life of their own. Lyrics like “The world is changing quickly/ and I couldn’t tell you why” resonated with an uncanny truth. A sense of solidarity formed out of shared looks and sung words between the crowd and the band. While there may have been a stage separating the two, it was clear that everyone in the room was on the same page.

In addition to playing through the entirety of Fuzzybrain, the band debuted new tracks “Medicine” and “Balcony” and treated the crowd to a few covers, most notably Tears for Fears’s “Everybody Wants To Rule The World.” The changes to the synth and the added emphasis on the live instrumentation brought a dreamy and upbeat quality to the track. The cover served as a lead-in to the group’s last—and most anticipated—song of the night: “Run The World!!!” The atmosphere was electric as everyone, band included, jumped around and yelled the words.

As the song came to a close, it was evident the concert had ended too soon. The stage descended into darkness and Dayglow began making their way offstage. The crowd, unrelenting, began chanting, “One more song! One more song!” After a few seconds of prolonged shouts and confusion, the band raced back onstage and launched into an energetic cover of Whitney Houston’s “I Wanna Dance With Somebody.” Coming out of the concert, I felt a kind of catharsis. While my worries were far from over, I somehow felt a little more ready to confront them, taking comfort in the fact that I wasn’t alone in any of this.

As we turn to different forms of art—movies, television shows, music—for comfort in these times, I would encourage you to give Dayglow a listen. And, should you get the chance to see the band live sometime, I promise that you’ll be smiling from the very beginning.