"Beastars": The Bewildering Escape That Was, In Fact, Not Escape 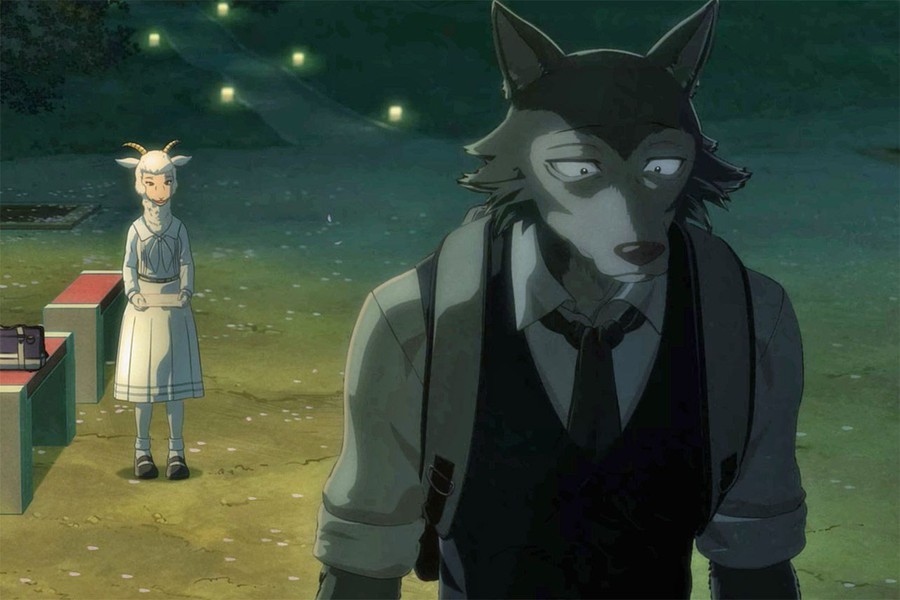 We assure you this show is well worth the watch.

This review contains spoilers and mentions of sexual assault and drug abuse.

I heard about Beastars the same way as anyone who wasn’t a loyal reader of the manga—the viral image of an anthropomorphic female rabbit, exposed human breasts and all, attempting to seduce a wolf more than four times her size. Comparisons to the more PG Zootopia exploded online, as did the affirmative conclusions that Netflix had finally satisfied the furry fantasy. For reasons no more than curiosity and boredom, I found myself pressing play on the first episode of the 12-part series, expecting to react the same way people did to the online memes. At face value, Beastars is indeed a bizarre, hypersexual story of a wolf falling in love with a rabbit, but the narrative morphs itself entirely through its interwoven and jarringly real storylines of human pitfalls, from childhood trauma to toxic masculinity to physical violence. Its otherworldliness initially promises itself as escapism, a baffling diversion from our unsettling self-quarantine, but, ironically, its characters swap the torment of isolation for other achingly palpable conflicts, grounding the audience in a dark and inexorable reality that forces us to face the ugliest of humanity.

The anime follows Legoshi (Chikahiro Kobayashi), a timid and reserved gray wolf at Cherryton High School, as he navigates a world grappling with the tension between herbivores and carnivores—the latter of whom have seemingly sacrificed their consumption of animal meat and replaced it with vegetarian alternatives. A member of the on-campus theater club, Legoshi, a literal lone wolf, offers a look into the violent eruptions of carnivorous threat unfolding within the school and beyond. As we follow him, the distinction between performance and reality begins to disintegrate: the series itself begins with the mysterious murder of alpaca student, Tem. The rest of the series continues likewise—moments of bubbliness and peace between the carnivores and herbivores are flung aside by scenes of bloodbath, attempted rape, drug abuse, and the alarming proliferation of a black market that sells animal blood, meats, and addictive substances. Centering the plot around a group of theater kids brilliantly executed this very juxtaposition: where does the acting end, and where does the real world pop in? Do the two coexist in a tension predestined to slip into an uncontainable chaos?

While the murder mystery itself remains unsolved in the first season, its ghostly presence divides the carnivores from the herbivores and is acknowledged in every interaction between the main characters. Legoshi, who had resigned to keeping his head low to avoid suspicion regarding Tem’s murder, finds himself struggling to maintain his composure when he meets Haru (Sayaka Senbongi), a promiscuous, albino dwarf rabbit and the sole member of the gardening club. She is nearly everything that Legoshi is not—outspoken, herbivorous, sexually driven, fatalistic—but shares with him the sinking feeling of an outcast reputation: she is tarnished by slut-shaming and the general view that rabbits are a weak, easily frightened species. Infatuated with Haru, Legoshi grapples with his predatory instinct to slaughter and eat her, alongside his developing crush. Is he doomed to succumb to something innate, repeating the tragic history of Tem’s death, or can he overcome an insatiable hunger and truly love a rabbit? As Legoshi is tormented by the imbalance between his identity and social expectations, Haru is fixated on her own problems, revolving around a charismatic red deer and her own promiscuity.

Haru serves as one of the most intriguing—dare I say, human—female protagonists I’ve seen in an anime, because her internal anxieties reflect the unspoken silences of real women. Constantly berated as a cute and frail weakling by other animals, she seeks the most minute forms of encouragement through self-fetishization, deluding herself into believing that she can only unlock her strength through sexual encounters with male animals—falling in love with a deer in the process—and hyper-sexualizing herself as a result. The show cleverly retracts any sort of shaming, and instead asks if this sexualization is truly her empowered definition of self-acceptance, or tragically a gendered objectification that she hopelessly performs in a desperate attempt to distance herself from a stereotypical “weak” image. Again, the troubled coexistence of performance and actuality resonates within Haru’s persona, and, despite her anthropomorphic appearance, it is a raw human element which parallels the very real uncertainty of teen sexuality and self-perception.

Perhaps the creativity of Beastars shines the most with how it tackles the concept of the food chain—particularly for an animal stuck at the crossroads between aggression and helplessness, like the red deer Louis (Yūki Ono). Louis, the leader of the drama club, is Legoshi’s exact foil: he is confident, talented, and popular. In fact, Louis is rumored to become the next “Beastar,” a vaguely defined status that symbolizes the unity between predator and prey in this animal world. However, Louis conceals an insecurity by combatively lashing out at his fellow drama club members: he envies the predators for being born with natural strength, and is painfully aware that he, a deer, can easily become the next target for any carnivore who succumbs to instinct. Louis may be famed for his brilliant onstage acting, but his façade becomes clearer beyond the spotlight. He is jealous of the timid Legoshi for having the choice to be vulnerable, and is deeply sensitive to his inability to fight off threats such as the lion gang Shishigumi, even when they kidnap and attempt to rape Haru. The humiliation haunts him, testing his masculinity as the entire world pressures him into becoming the metaphorical bridge between all animals. Louis struggles with the inverse conflict Legoshi faces: under constant scrutiny, they both try to become something they are not, questioning if they can truly deviate from their assigned and preordained identities—a compelling message for all those who feel social pressures creep into their internal anxieties and wavering convictions.

While the supporting characters of the show often amounted to little more than plot devices to swerve the episodes in different directions, I admired the dynamic they offered in the world-building process. Gouhin (Akio Ōtsuka), the muscular giant panda doctor, is the voice of reason to both Legoshi and the audience, questioning the sustainability of Legoshi’s relationship with Haru while remaining sympathetic to the wolf’s friendship and aiding him on his rescue mission to save Haru. Bill (Takaaki Torashima), an outspoken tiger, embodies a brash and toxic masculinity, testing the limits of morality through his drug abuse and hostile, drug-enhanced encounter with Legoshi. Juno (Atsumi Tanezaki), a kind freshman gray wolf, falls in love with Legoshi and is hell-bent on viewing everything as a competition that she must win, be it in taking her fellow wolf’s attention away from Haru, or defeating Louis for the title of Beastar.

These characters’ interactions sold the series for me—constantly questioning what should be considered real and just, and whatever else as immoral and constructed. Louis finds himself in an identity crisis because of his background as a victim of the black market, illegal livestock trading serving as a blatant allegory to the traumatizing experiences of human trafficking victims, and uses his frustrations as his justification to avenge fellow herbivores. A shaking, beaten-down animal at the black market extends his hands to Legoshi and his friends—revealing stumps instead of fingers—and begs the predators to buy his remaining fingers as snacks, hinting at the economic disparity of Beastars’s social outcasts, who turn to dark means to survive with no other choice left. And, in one of my favorite scenes, Legoshi tears at the neck of the Shishigumi Boss in order to save Haru from her attempted rape and murder. The audience is left looking at the blood dripping from Legoshi’s fangs, his glowing red eyes, and his snarl—and Haru stares back in shock at the “true” nature of her friend. We, like Haru, are left in a disturbed state of constant uncertainty, paralyzed by our frustrating inability to discern the morality behind each action, despite the desperate situations that seem to necessitate them. Only then do we realize how jarringly real all of Beastars feels; our pining for justifications are left unanswered, our demands for certainty dissolved.

The animation of Beastars itself also presented a wonderful momentum that complements the uneasiness underlying every scene. The clever blending of 2-D and 3-D animation deconstructs each of the characters in captivating ways, capturing the slouchy gentleness of Legoshi, the steely ambition in Louis’s eyes, and the wildly differing heights between predator and prey species. 3-D animation truly takes center stage in its painstaking detailing of Louis’s composed posture: he stands upright despite an ankle injury, his hobbling barely visible as he walks onto the theater stage, showing that he prioritizes his reputation over his physical health. While the same scene could probably have been executed through the traditional 2-D animation, the subtle staggering of his outline was outstandingly animated and brilliantly illustrated the dynamic of Louis’s character struggling to overcome his “prey” nature.

It goes without saying that Beastars will not be for everyone. Some audiences have noted never getting past one episode because of its bizarre character designs; others are more plot-driven watchers and found the anime boring in its focus on the evolving character interactions between the main protagonists. However, the show subverted all my expectations, and, frankly, I found this season quite enjoyable. Beastars embraces its ridiculousness, sprinkling in playful banter between its much darker motifs. The show wielded an unwavering ability to question the line between the real and the performed, both within the context of the food chain and within our own quarantined world. Maybe Beastars was indeed an escape, a temporary suspension of our everyday anxieties to watch some bizarre wolf-bunny romance. Yet it was also similar to jumping out of the pan and into another pan, both hovering above the impending fire—the flaws that we face in the real world, after all, are (not so) subtly reflected in the fantasies we create.