Yes, and Scene! Long-Form Improv for the Streaming Age 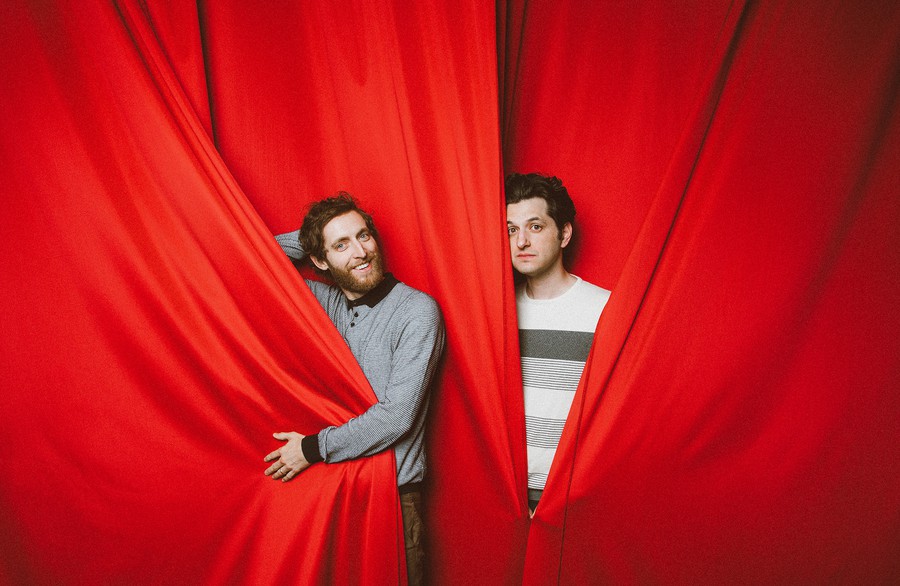 "Middleditch and Schwartz" is a fresh breath of air in the world of improv, accidental slip-ups and all.

Courtesy of Middleditch and Schwartz

When we think of improvisation, we probably think of those two famous words: “Yes, and…”

In the new Netflix special Middleditch and Schwartz, comedians Thomas Middleditch and Ben Schwartz transcend the potential of those two words to produce completely unique long-form improvisations that hail the complexity of unscripted comedy and its many merits.

While the two comedians are known for their roles in other shows and movies, such as Ben Schwartz’s Jean-Ralphio in Parks and Recreation, or Thomas Middleditch’s Richard Hendricks in Silicon Valley, their shared background in improvisation is what truly shines in these specials.

The premise of the show is simple enough: Middleditch and Schwartz begin by asking the audience if there is an event that they are excited for or dreading; they listen to the scattered shouts and choose an audience member to further elaborate. Who’s involved? What are they like? When is the event? Where is it? Once both comedians have enough to work with, they create a story worth watching for the next 45 minutes or so.

While the basis for each of the three specials seems mundane—a wedding, a law school final, and a job interview—Middleditch and Schwartz turn each event into a complex, and sometimes insane, storyline with a varied and distinct cast of characters. The worldbuilding inherent in improvisation allows both comedians to flex their comedic talent and build upon one another to create unforgettable stories—no preparation necessary.

The most entertaining aspect by far is the interactions between the two comedians. For example, in the law school special, Schwartz threw a total curveball at Middleditch by introducing a new element into the storyline—one I won’t reveal for the viewer’s benefit. Watching both comedians attempt to incorporate and wrestle with this unconventional addition provided a welcome source of laughter in an already captivating special. In a different special, Middleditch introduced a ghost into the scene, which Schwartz later brilliantly utilized to tie up loose ends and continue on with the story. The two aren’t afraid to play off of and challenge each other, granting them the freedom to take each special to new heights.

Despite the mastery with which both comedians navigate creating an evolving storyline and rotating through a cast of characters, the performances themselves aren't without the occasional blunder. From forgetting the name of a character to retracing an entire plotline after a body switch, these slips-up highlight the intricate and dynamic nature of improv, showing us that even seasoned professionals can get lost in the stories they create.
In the face of the polished and precisely crafted comedy specials usually found on Netflix, Middleditch and Schwartz is a breath of fresh air. Comedy doesn’t have to be perfect in order to be funny; in fact, sometimes the most amusing and refreshing moments happen when something goes wrong. While Middleditch and Schwartz is Netflix’s first long-form improvisation show, I certainly hope it isn’t the last.