When the world needed him most, he vanished—fifteen years after it began airing, "Avatar: The Last Airbender" finally returns on Netflix U.S. 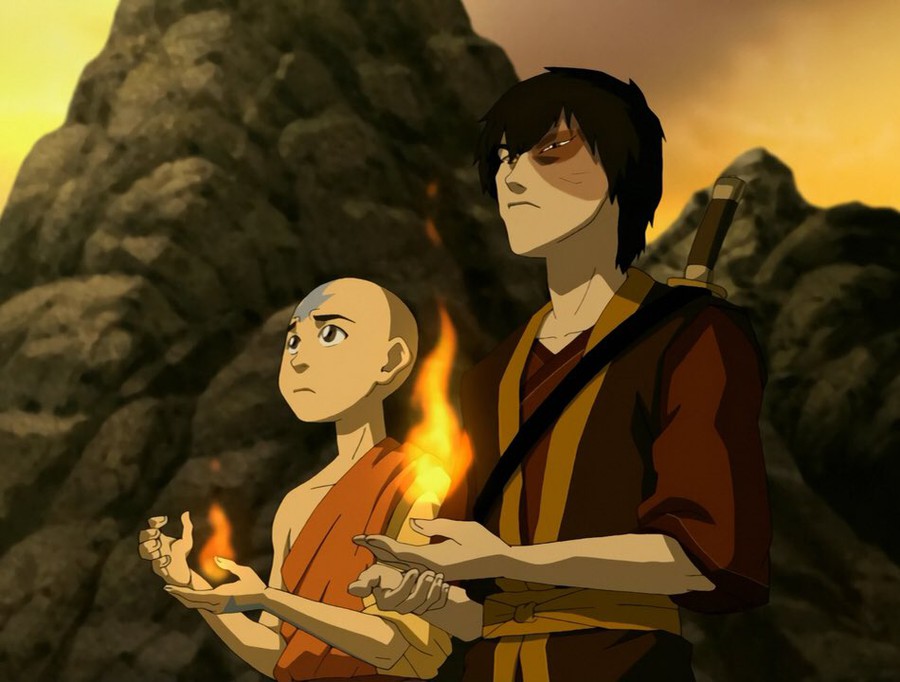 As I grow up and continue to rewatch Avatar, I’ve begun to truly appreciate how it deftly balances lighthearted hijinks with rich and emotional storytelling.

Water. Earth. Fire. Air. Long ago, the four nations lived together in harmony. Then, everything changed when the Fire Nation attacked and angsty teenaged Zuko came straight for my five-year-old heart. It’s the 15th anniversary of Avatar: The Last Airbender, and as the series finally returns on Netflix U.S., I thought I’d take a look back at one of my favorite childhood cartoons.

Created by Michael Dante DiMartino and Bryan Konietzko, Avatar aired from 2005 to 2008, spanning three seasons and 61 episodes. Each episode is both self-contained and part of a much larger, grander adventure of a young boy and his friends. Admittedly, when I first watched the series, a lot of the deeper themes and nuances flew right over my dumbass head, but even as a kid, I remember being awed by Avatar’s fluid animation, especially the bending sequences. I hadn’t yet had my Sailor Moon phase, so Avatar, influenced by both American and Japanese animation, visually stood out from almost every other cartoon I’d watched. Beyond the animation, though, tiny me also worshipped Avatar's characters. Zuko owned my five-year-old heart from the first mention of honor (and hot leaf juice), but I also loved Toph’s resilience, Sokka’s creativity, Katara’s determination, Aang’s optimism, Iroh’s wisdom, the cabbage merchant’s cabbages, and so, so much more.

At its core, Avatar is a coming-of-age story; the characters must mature into their responsibilities and understand their roles in a time of crisis and conflict. The series explores themes of friendship, duty, and family, but also touches on issues of war, marginalization, and totalitarianism. Aang is the last survivor of a cultural genocide, which wiped out all the Air Nomads. The episode “Lake Laogai” is inspired by the prison camps (Laodong Gaizao) in the People’s Republic of China, where opponents of the Chinese Communist Party were sent to work as slave labor. Even the meta-parody episode “The Ember Island Players” shows how entertainment can act as propaganda, offering commentary on the cultural impacts of imperialism. Heavy stuff for a kids' cartoon, yet Avatar never feels inaccessible or overly morbid. It’s still a series about kids, for kids.

As I grow up and continue to rewatch Avatar, I’ve begun to truly appreciate how it deftly balances lighthearted hijinks with rich and emotional storytelling. The first time I properly rewatched the series was freshman year of high school. I’d just moved from Canada to Hong Kong and spent most days staring at my laptop or phone, waiting for friends back home to wake up. Looking back, trying to watch 61 episodes in three days may not have been the smartest idea, especially when I had to wake up for school at 6 a.m.. Still, reliving my childhood nostalgia helped push aside how homesick I felt; for 23 minutes, my only problems were low bandwidth and potential viruses from the maybe-illegal websites I was using.

There are so many things I love about Avatar: its insane quotability, with lines like “There is no war in Ba Sing Se,” “My cabbages!” and, of course, “That’s rough, buddy”; the way it questions fate, destiny, and free will, especially in Aang’s refusal to kill Ozai; the inside jokes it’s given me and my friends, including shipping wars before we knew what shipping was (Zuko x Katara 5ever!!!); the multicultural influences on its mythology and world-building, including East Asian, Inuit, and New World societies; how Zuko’s character arc is represented by how attractive his haircut is; the subdued and haunting soundtrack for the final Agni Kai battle between Azula and Zuko, underscoring the tragedy of their conflict; the list goes on. Avatar is really, really good.

Fifteen years after I first watched it, I find myself coming back to Avatar: The Last Airbender again. Things have changed, and yet, so many things have stayed the same. I’ve moved back to Canada, my brother is home from college, and I’m spamming friends across different time zones with bad memes before they wake up. I still bawl like a baby when I watch “The Tales of Ba Sing Se,” but now I can also recite half of “The Ember Island Players” by heart. Netflix is working on a new live-action adaptation for Avatar, with hopefully less traumatic results than M. Night Shyamalan’s 2010 train wreck. Although details are scarce, I’m cautiously optimistic at the prospect of seeing a beloved series come to life in a new medium. Until then? I’ll be rewatching all three seasons of the original cartoon, believing that although he still has a lot to learn, Aang can save the world.

Avatar: The Last Airbender is now available to watch on Netflix U.S. (It’s been available in Canada for a while. Sucks to suck, America.)