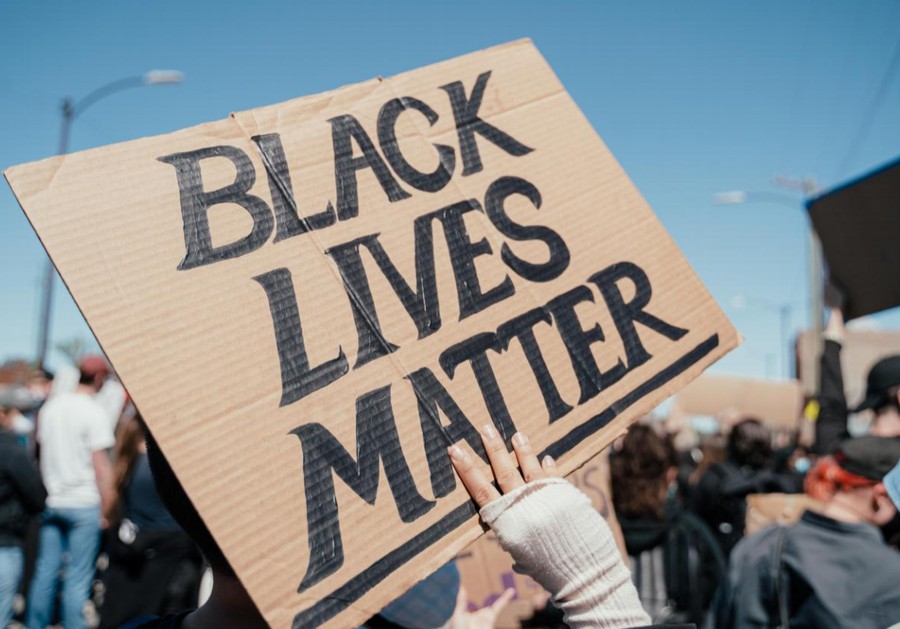 A Black Lives Matter sign from a protest in Chicago.

Last Monday, the history department hosted an online panel, 1968 to 2020: History Town Hall on Race, Protests, and Policing, where associate professors Jane Dailey, Adam Green, and Kathleen Belew offered insight into how the Black Lives Matter (BLM) protests of this past month have progressed into an unprecedented moment that could be a watershed event for racial progress.

Within the last 50 years, demonstrations for racial equality have been central to American politics. However, the killings of George Floyd, Ahmaud Arbery, and Breonna Taylor have sparked a much greater response, the professors said, than the more than 1,200 other police killings of Black people since 2015.

“In my lifetime, I have never seen so many people question the premise that one needs to think about an ordered and safe society, ultimately, by upholding law enforcement,” Green said.

Green, whose work has focused on Black communities in the Chicago area, particularly the city’s race riots in 1919, said that compared to every protest of the past century, none have amassed the size and geographic scale of the current protests.

Another element which makes these protests so extraordinary is what Green called their “fortitude.” Despite challenges posed by the coronavirus pandemic, protests have now lasted more than three weeks, maintaining their principles of peace and reform despite attempts to implicate the movement in violence and looting.

The terminology given to demonstrations, particularly racial, has been historically controversial even since slave rebellions, Dailey said. Given this long history of debate, she wondered about how social media, which has played an active role in organizing the BLM movement, has affected the influence and public perceptions of the most recent protests.

“If you have an event that’s organized by Instagram, can you fairly call that a riot? Is it something else: Is it a protest, is it a movement, is it an organization?” Dailey said. “I think that when we call things riots, we're suggesting that they're unorganized, that they're out of control, that they have violence at their heart, that they don’t have any coherent political goals.”

News reports have shown that violence at some protests has been provoked by police officers and that some of the looting occurring at protests is by people unaffiliated with the BLM protestors.

“In some ways, the real riot that's taking place is actually police aggression against protesters, rather than the actions of protestors themselves,” Green said.

Belew, who specializes in studying the white power movement, has been working to understand the sources of violence at protests and identify the motivations of the instigators. According to Belew, paramilitary activists and law enforcement are difficult to distinguish at the recent protests because they are dressed and equipped the same.

“The process of paramilitarization that shaped the white power movement we’re confronted with today…has also shaped our civilian policing and our militarization of our armed forces within our borders,” Belew said.

Belew was also interested in analyzing “where the boundaries of acceptable violence are within American life.” She compared the different reception of violence when it occurs overseas versus domestically and, furthermore, when it occurs in privileged versus marginalized communities.

Green pointed out that notions of acceptable uses of violence against protestors have changed even since protests as recent as the 2015 demonstrations in Ferguson, Missouri prompted by the killing of Michael Brown.

“That this is happening with large numbers of non-white people taking part in protest is really, really significant. But, the fact that in earlier years, not so long ago, largely Black protests, specifically, in Ferguson, were seen as legitimate to be met with significant force, and sometimes very violent and endangering force, is also significant.”

Along with increased participation from white, affluent supporters, the recent protests have prompted celebrities, politicians, and people in positions of power to speak out. Green called this the “breaking of ranks.” Notably, former Secretary of Defense James Mattis and current Secretary Mark Esper spoke out against President Donald Trump’s threat to deploy troops from the National Guard on protesters.

Calls to defund or abolish the police, once fringe movements, have become increasingly popular just within the past few weeks. In Minneapolis, where George Floyd was killed, a veto-proof majority of the city council voted to commit to defund and dismantle their police department.

The panelists were curious to see, given the unprecedented influence and scale of recent protests, if this push would be one of the first to make substantive and lasting reform. With the presidential election just around the bend, they said, the demands of the public and opinions about proper social organization and governing could look substantially different than those even a year ago.

“It's been striking to watch the way in which these protests around police brutality and violence have kind of escalated up to…a sort of Rorschach test in relation to the broader ideological polarization of the country,” Green said. “I think it necessarily is going to be a divider in terms of thinking about the kinds of philosophies that people adhere to, in terms of thinking about a just, fair, and—again, that word—safe society.”