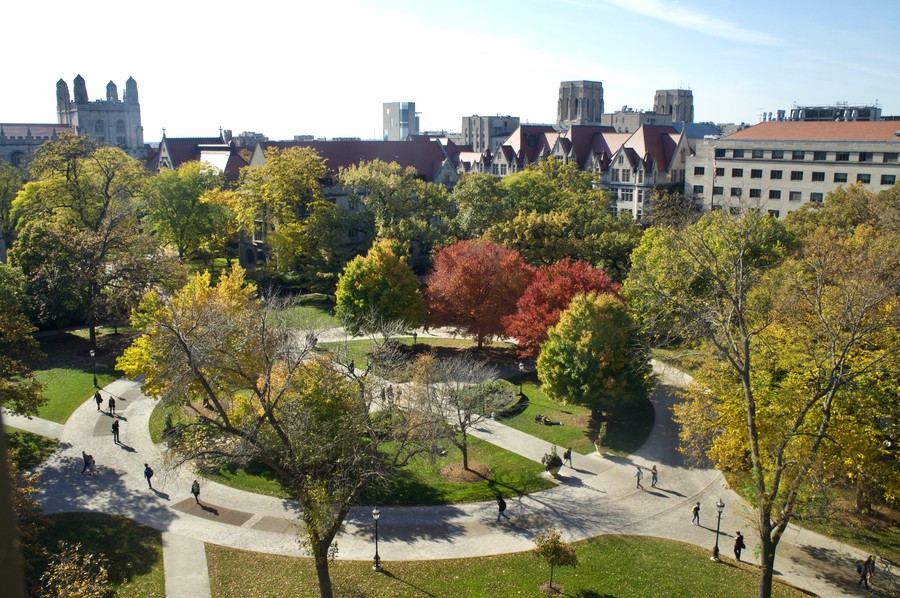 By Kate Mabus   and Laura Gersony

[This is the second in a series of articles relating to sexual assault at UChicago. The first installment, an analysis of changes to Title IX under Secretary of Education Betsy DeVos published on April 29, can be found here.

The Maroon’s data analysis is not intended to be prescriptive or to imply causation among any measured variables, as it is strictly observational.]

The high profile “1–in–5” statistic has long been a rallying cry among sexual assault victims’ rights advocates: by many estimates, a startling 20 percent of undergraduate women report experiencing sexual assault while in college.

But a 2019 “campus climate survey,” commissioned by the American Association of Universities (AAU) and administered at 33 universities nationwide, including UChicago, suggests that this number has only increased in recent years. According to student self-reported data, this statistic is up three percentage points from 2015, when the AAU last administered this survey: the oft-cited “1–in–5 statistic” of sexual assault among undergraduate women, the report found, now exceeds one in four.

The AAU’s national survey results, as well as UChicago’s individual report, are publicly available online. But, for a more detailed breakdown of this data, The Maroon obtained all of the 33 participating universities’ surveys and performed a retrospective analysis of school characteristics not assessed in the aggregate national report, such as the presence and recognition of Greek life, undergraduate sexual assault prevention measures, and a school-by-school look at the location of incidents.

The campus climate survey was the second such survey that the AAU has commissioned, the first one taking place in 2015. While UChicago did not participate in the first survey, the AAU has described several main trends in the nationwide findings from 2015 to 2019.

First, the nationwide prevalence of “nonconsensual sexual contact by physical force or inability to consent,” as measured by student self-reports, has increased since 2015 among many populations. This statistic increased by 3.0 percent (to a total of 26.4 percent) among undergraduate women, by 2.4 percent for graduate and professional women (to 10.8 percent), and by 1.4 percent among undergraduate men (to 6.9 percent). 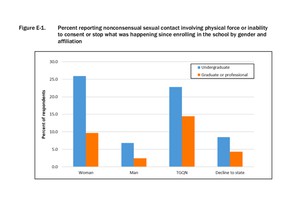 Figure E-1 in the AAU 2019 national report: Nationwide percent reporting nonconsensual sexual contact involving physical force or inability to consent or stop what was happening since enrolling in the school by gender and affiliation.

The Association of American Universities

The results of UChicago’s individual campus climate survey were made public to the student body in October 2019. 32 percent of the total undergraduate, graduate, and professional school population responded to the survey.

UChicago fell close to nationwide averages with regard to the total rates of sexual assault among the general student body. The rate of sexual assault was 21.8 percent among the female undergraduate population, a few percentage points lower than the nationwide averages, and 7.8 percent among a male undergraduate population, one point higher than the national average.

This was also reflected at UChicago; 60.2 percent of TGQN students reported experiencing harassing behavior, as compared with the total respondent average of 39.8 percent.

The survey found that, both nationwide and at UChicago individually, Asian students reported being victimized at significantly lower  rates than non-Asian students (approximately 50-75 percent that of non-Asian students). This holds true with regard to both sexual assault and other forms of misconduct such as stalking, interpersonal violence, and sexual harassment. 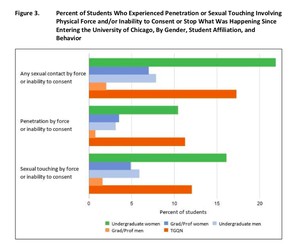 Students across the country reported significantly higher levels of awareness of their schools’ definition and procedures related to sexual assault since 2015; in particular, the percentage of students knowing their school’s definition of sexual assault and other sexual misconduct increased by 11.5 percent among undergraduate women and 12.4 percent among undergraduate men.

However, the AAU concluded, the results of the 2019 survey show that students “still aren’t reporting assault or using resources for victims often enough.” At any given school, the percentage of incidents involving penetration that were brought to school programs or resources ranged from 65.6 percent all the way down to 16.5 percent. Analyzed by cohort, 42.9 percent of TGQN students, 29.5 percent of women, and 17.8 percent of men who experienced an incident involving penetration contacted official authorities or resources.

UChicago’s report showed a tendency for students to seek help through personal contacts after a victimization rather than through University resources. Most women respondents who experienced nonconsensual sexual contact told a friend (82 percent), and far fewer reported the incident to a University-offered program or resource (15.5 percent).

The most common reasons why victims of non-consensual penetration chose not to contact resources were the belief that “they could handle it themselves” and the perception that “the incident was not serious enough,” or the victim “felt embarrassed, ashamed, or that it would be too emotionally difficult to report.” By gender, fear of embarrassment and shame was a more common answer among women and TGQN students (41.7 percent women, 36.0 percent TGQN students, 27.9 percent men) while men most commonly cited the belief they could handle it themselves (60.4 percent men, 48.8 percent women, 40.1 percent TGQN students).

At UChicago, the aggregate levels of confidence in the University’s reporting process were similar to national averages. UChicago’s survey from this fall found that around a third of the total student population felt it “very likely” that the University would conduct a fair investigation and 14.6 percent felt it “extremely likely.”

The data also sheds light on the perpetrators of incidents of sexual misconduct among various campus populations; notably, 24.5 percent of harassing behavior experienced by female graduate students was perpetrated by a University “faculty or instructor.”

The results of the nationwide survey have elicited concern from many onlookers, including AAU President Mary Sue Coleman.

“These disturbing numbers make clear that there is much more we must do,” Coleman wrote following the release of the survey.

To supplement the aggregate report released by AAU, which reported the nationwide average figures, The Maroon analyzed all of the 33 participating universities’ survey results with regard to university characteristics not addressed in the national report.

According to both formal outlets and several current students at both institutions, Caltech and Rice University have no Greek life presence on their campuses. These two schools reported the two lowest percentages of undergraduates “experiencing penetration or unwanted sexual contact due to force or inability to consent” of all 33 participating universities.

At Rice, this statistic was 14.3 percent among women undergraduates and 3.1 percent among men. At Caltech, these statistics were 17.7 percent and 3.9 percent, respectively.

The other four participating universities which either do not have Greek life or do not recognize Greek life are Caltech, Rice, Harvard, and Georgetown. These four institutions reported the four lowest fractions of incidents involving sexual touching or penetration which take place in a fraternity/sorority house (ranging from 0 percent at Caltech to 2.1 percent at Georgetown).

Representatives from UChicago Greek life organizations declined to comment, saying that it is not their policy to speak with the press.

All schools were categorized as having a one-time, annual, biannual, extended, or no mandatory training program. UChicago performed similarly to other schools with an annual training requirement. There was no significant difference in the incidence of sexual misconduct among these categories, with the exception of Rice University, which requires an extended five week or semester-long course for all incoming first-year undergraduates.

Reception of the Survey

UChicago administrators expressed concern about the results of the survey at the "Community Conversation" following its release.

“Any data where students have been sexually assaulted or harassed is concerning, but there are particular findings that we’re interested in understanding in more depth,” Title IX Coordinator Bridget Collier told The Maroon, noting especially the finding that TGQN students, students of color, and students of disabilities report significantly higher rates of incidence.

The University's main response to this finding has been to create the position of Director for Education and Outreach in the Equal Opportunity Programs Office. Director of Resources for Sexual Violence Prevention (RSVP) Vickie Sides said that the main purpose of her position is to improve outreach to student populations most vulnerable to sexual assault. She works with staff and student leaders across the University from LGBT student life and disability services, as well as with “community resources”—such as the Center on Halsted, a Chicago-based LGBT community center—to tap their expertise on how to connect with these populations.

Prior to administering the survey, the University convened a Faculty Advisory Committee chaired by Professor of Sociology Kate Cagney and including Collier, Assistant Vice President for Institutional Analysis Liam Schwartz, and three other faculty members. Representatives from the committee also added questions to the survey regarding sexual coercion or “quid pro quo” situations and perpetrator characteristics, including the number of perpetrators, their sex, and how they are associated with the University.

The committee is in the process of reviewing the results of the survey, and intends to issue recommendations based on their data analysis. In collaboration with RSVP and the Title IX office, the committee’s primary efforts have been focused on cross-institutional analyses investigating UChicago's results compared with peer institutions.

The main factors under consideration by the committee, Collier said, are the prevalence of sexual assault, the characteristics of those incidents (such as location or drug and alcohol use) and students' knowledge of available resources. Another focus of the Committee is student confidence in the incident reporting process.

The committee is also in conversation with universities whose data suggests a stronger sense of community and individual belonging on campus regarding practices they have found to be successful in this respect. Collier said that given the benefits of the AAU survey, the University will consider participating again in future years.

Still, the results of the survey did not come as a surprise to students with experience in organizing around sexual assault on campus. In a statement, members of UChicago victims advocacy group Phoenix Survivors Alliance (PSA) told The Maroon that the survey results simply underscored a known, saddening reality of campus.

“We are naturally not surprised by the results of the AAU campus climate survey and would like to stress that given the nature of our institution, we feel that the numbers are still underreporting the reality of life on campus,” the statement said.

According to PSA, the report reveals another simple and harrowing truth: that the University’s measures to mitigate sexual assault have not been enough.

"If over 90 percent of students report having some form of sexual assault training and the numbers are still this high, then we would hope that the university understands that their current solutions are not educating students well enough to help solve or diminish rape culture.”

[The Maroon is committed to achieving a thorough understanding of this issue. If you or someone you know has experiences or information that you would like to share with us relating to sexual assault and/or the Title IX reporting process at UChicago, please contact us at kmabus@uchicago.edu or lgersony@uchicago.edu.]