"The King of Staten Island" Review: For Pete Davidson, It’s Not Easy Being a King 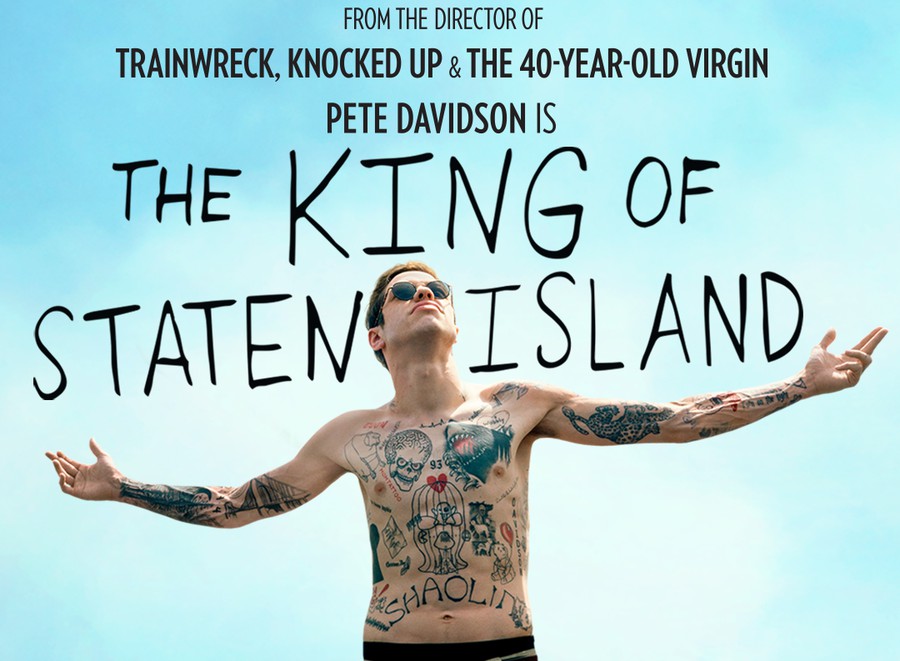 While "The King of Staten Island" has an unexpectedly dark sense of humor and can be a bit depressing at times, the film never shies away from its upbeat, emotional moments.

The King of Staten Island is director Judd Apatow’s newest film, written by Apatow, Pete Davidson, and Dave Sirus. It stars Davidson as Scott, a man in his mid-twenties still living with his mother Margie (Marissa Tomei) who has had a case of arrested development since the age of seven, when his firefighter father died. While his younger sister Claire (Maude Apatow) graduates from high school and heads for college, Scott spends most of his days smoking weed, hanging out with his friends, and practicing his tattoo art in hopes of someday opening up a tattoo restaurant. However, when Scott’s mother starts dating a loudmouth firefighter named Ray (Bill Burr), Scott is forced to grapple with his grief and move on from his past.

The basic premise of the film was first developed by Davidson, who drew from his personal experiences growing up in Staten Island and losing his father in 9/11. The death of his father still impacts him greatly, as he states both in interviews and on social media. Considering his character’s name is the same as his late father’s, it is clear Davidson put a lot of passion into this personal project to honor his late father’s legacy. Apatow himself is no stranger to stories of lost souls trying to find purpose or meaning in the world. Whether it’s Andy from The 40-Year-Old Virgin, Ben from Knocked Up, or George from Funny People, all of Apatow’s protagonists are man-babies trying to mature and move in a new direction with their lives. Pete Davidson’s Scott is another in Apatow’s collection.

Despite its R rating, The King of Staten Island is surprisingly sweet and wholesome. While the movie has an unexpectedly dark sense of humor and can be a bit depressing at times, the film never shies away from its upbeat, emotional moments. Bitter about the passing of his father, Scott aggressively refuses to talk about how his father’s death has impacted him. However, as the film progresses, he surrounds himself with friends and family who love him and want him to find peace, and, no longer able to bottle that bitterness, he eventually acknowledges that he must move on and look for a better future if he truly wants to be happy. I was surprised at the level of maturity and optimism of the film’s theme and message, and I applaud Davidson and Apatow for pulling it off.

If you couldn’t already tell, The King of Staten Island takes place in Staten Island (how shocking!). Despite the fact that I have never been to Staten Island, I felt a sense of familiarity with the setting. Throughout the film, numerous characters talk about how much they love the city and how it feels like a part of their identity, and I could not help but feel the same way. Even though I have never stepped foot in Staten Island, I always felt like I was a member of the community, going through life much like Scott and the other inhabitants of Staten Island. For example, during a scene where Scott and his friends are hanging out at a basketball court, Scott tells his friends that while Staten Island may have its problems, there is nothing he would change about it. This is what I believe about my hometown in Indiana, and I am sure millions of others feel the same way. I am a firm believer in the idea that settings can be their own characters in a film or story, and the film very much succeeds in making Staten Island not just the setting, but a part of Scott’s character.

Without a doubt, the real standout character of the film is Davidson’s Scott. While Davidson plays a fictionalized version of himself in the film, I cannot help but admire how Scott reflects Davidson’s real-life personality. One aspect that parallels Scott with Davidson is their relation to mental health and suicide, personal issues Davidson himself has addressed in his stand-up, on Saturday Night Live, and on social media. Considering how important these issues are to Davidson, they play a prominent role in the movie, though are presented in a subtle manner. For one, the film opens with Scott closing his eyes while driving, and when he opens his eyes and almost crashes his car, he repeats “sorry” to himself over and over. Scott also talks about “hurting himself” to his sister but then uses jokes to mask his true feelings. Davidson walks a thin line between fact and fiction, and his effortless execution of this made him stand out throughout the entire film.

The performances of the supporting actors were equally remarkable. Bel Powley was impressive in the film as Scott’s sort-of love interest, Kelsey, as she not only pulls off a believable Staten Island accent but also brings a level of realism to her role, despite her limited screen time. Additionally, while Bill Burr basically plays himself in a way that fits the tone and atmosphere of the movie well, he also brings a level of quietness and emotion to some scenes that I didn’t know he was capable of. These moments of reservation add more depth to Burr’s character Ray.

That said, the other side characters tended to be one-dimensional, contributing little to the movie outside of their stated purposes. While the supporting cast gave fine performances, I felt like they lacked the amount of depth and character of Davidson’s Scott or Burr’s Ray. The actors who play Scott’s friends were fine, but I don’t really know much about their character’s personalities other than the fact that they love weed and have a ton of tattoos. There was a scene involving a pharmacy that led to Scott’s friends getting into trouble, but because I know very little about them and did not find them particularly interesting, it was hard to care about what happened to them. Despite being well-acted and having her own personality, Bel Powley’s character, Kelsey, also had little purpose outside of being Scott’s sort-of love interest.

However, the character who exemplifies this issue of one-dimensionality the most was Steve Buscemi’s character. As much as I love the man, there was nothing about his character that I found remarkable or memorable in any way. He doesn’t really have any major stakes or role in this story other than having known Scott’s father when he was still alive, but this is shared by all the firefighters that Buscemi’s character works with. At first, I thought that they were going to establish Buscemi as a second father to Scott, but considering that the second half of the movie is devoted to Burr’s Ray trying to emotionally connect with Scott as his father figure, I was confused then what the point of Buscemi’s character was. That is not to say that Buscemi was bad-- he gave a fine performance with the given material--but I think that if you are going to put a big name like Buscemi in your film, he should be given more than a merely passive, one-dimensional role.

I also had an issue with Apatow’s choice of camerawork and cinematography. All of his movies are shot like SNL improv sketches: static, eye-level, medium closeup shots that cut back and forth between characters talking to each other, with the occasional close-up of a character’s face. This generic approach to camerawork fails to develop a unique style of direction for his movies, and, unfortunately, this movie suffers from that same overused style. Granted, Apatow does change things up occasionally with the cinematography, especially during the pharmacy scene and a building fire scene, which involves firefighters extinguishing the flames while Scott watches from the sidelines. But it is still very much the same kind of work we have come to expect from Apatow. While this may not be something general audiences will necessarily notice, it can be distracting for the careful viewer.

Despite the negative points I have about the film, I can forgive it if The King of Staten Island is consistently funny and overall boasts a strong comedic presence. Does the film accomplish these goals? Kind of. As mentioned before, the film has a very dark sense of humor, a style of humor that Davidson excels at in his stand-up specials and on Saturday Night Live, and I found Scott’s dark jokes humorous. For me, the funniest scene in the entire film is when Scott and Ray fight over who deserves Margie’s attention the most, like how stoners fight over the last slice of Domino’s pizza. The scene eventually results in Ray throwing Scott into a swimming pool twice before Margie breaks up the fight. In my opinion, the film was at its funniest whenever it leaned into these moments of absurd, dark comedy.

These moments of dark humor and absurdism make up about half of the comedy of The King of Staten Island; the other half is made up of what I call Apatow-isms. What I mean by this is that, in all of Apatow’s films, Apatow primarily utilizes observational humor, in which characters react to everyday life with a blend of sex jokes, weed jokes, and pop-culture references. While there is nothing inherently wrong about this style of comedy, I don’t think it fits in a film like The King of Staten Island. Having characters scream nonsense at the top of their lungs or make jokes about weed/sex works in films like The 40-Year-Old Virgin or Knocked Up because they add to the charming ridiculousness of both of those films. However, since The King of Staten Island’s story is more grounded, mature, and personal, I think the film would have had a stronger comedic presence if it focused entirely on its dark, absurdist humor instead of having to split between that and Apatow’s classic observational comedy.

Also--and this is a more personal issue—I really do not find pop-culture references in comedy to be all that funny. Unless the movie is made by Edgar Wright, Quentin Tarantino, or is called Shrek or Shrek 2, I find pop-culture references obnoxious. For me, they don’t add anything comedically to a film, except winking at the audience and telling them, “Hey, we know this is really popular, so we’re gonna reference it just because.” For example, Scott references Game of Thrones to his mother three times, and as someone who had to sit through all of season eight, I did not find the referential joke funny the first time.

Overall, despite the issues I had with the film, The King of Staten Island is a sweet, wholesome R-rated movie that I recommend to anyone looking for something new to watch while being stuck at home during the pandemic. There is a lot of love and passion behind this film, and, while it has its flaws, it is a big crowd-pleaser that everyone can find some enjoyment in. However, if you are expecting the film to be deep, complex, and intricately made, you may be disappointed. I enjoyed watching the film, and if I had to give The King of Staten Island a score, then I would give it a 7/10.

The King of Staten Island is currently available to stream on VOD. Watch this space for an exclusive interview with director Judd Apatow.

Judd Apatow and the Everyday Appeal of Staten Island

Judd Apatow sits down with The Maroon to talk "Staten Island," working with Pete Davidson, and the appeal of lost souls in everyday life.