In response to the George Floyd protests, we need to focus our energies on speaking out against police brutality and racial violence instead of condemning the destruction of property and specific forms of protests that have occurred. 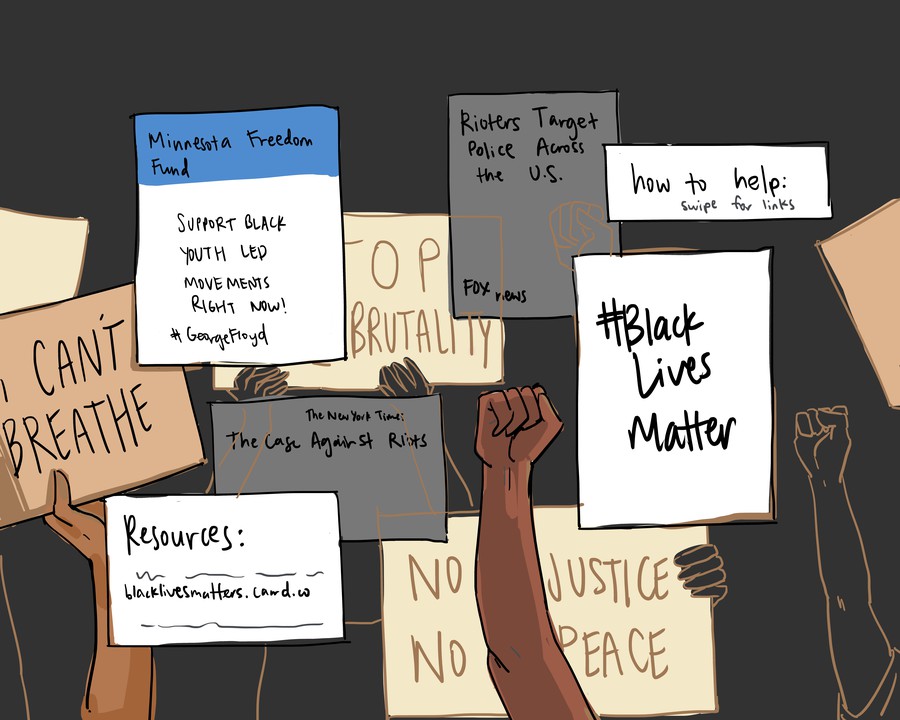 Like many of you, I have seen an outpouring of powerful activism on my social media feeds in the past week. We’ve seen resource guides and reflections, reading lists and mutual-aid efforts all responding to the murder of George Floyd last Monday and the protests that have ensued.

However, news in the past week has carried a different tone. One word in particular has stood out to me in the news headlines on the protests. Time and time again, news outlets on both the right and left have used the word “riot” to label what is going in throughout the country. Headlines such as “Rioters Target Police Across US”  and “The Case Against Riots” are ubiquitous and have, by and large, chosen to focus on condemning violence and anger.

To all those who have been condemning the riots, I ask the following: Why is that you choose to label some protests as protests, and others as riots? Why is it that you choose to use your voice to condemn rioting and looting instead of condemning police brutality? Whose place is it to decide what kind of protest is the “right” kind? And whose place is it to decide whether Black people can be angry?

Ruhel Islam’s Bangladeshi-Indian restaurant burned down on Friday after the protests in Minneapolis. This is what he had to say about it: “We can rebuild a building, but we cannot rebuild a human.… I understand why people did what they did. I am going to continuously promote peaceful ways and nonviolent movement. But our younger generation is angry, and there’s reason to be angry.”

As Islam—someone whose own business was shattered—points out, the destruction of property simply does not compare to the destruction of human life. Slavery, the police, and the American carceral state have looted from Black bodies for centuries in the United States. The stories of George Floyd, Ahmaud Arbery, Breonna Taylor, Michael Brown, Trayvon Martin, Eric Garner, and so many others are testaments to this. And they are not isolated instances of the police and criminal justice systems malfunctioning. They are instances of these systems functioning exactly as they are designed: to disproportionately target people of color and specifically, Black people. In a country in which Black people are incarcerated at more than five times the rate of whites, where Black people account for 31 percent of those killed by the police despite comprising only 13 percent of the population, denying this reality is not only naïve, but perpetuates the carceral state’s racist machinery.

To condemn the looting and destruction of property taking place instead of focusing on condemning police violence is to grossly misdirect your energies and resources. Some protestors may be looting, but the police system in the United States loots from Black people every day. This is not to deny or condone the violence on stores and businesses nationwide. But we need to understand that property can be replaced. Bodies cannot.

To the non-Black folks (myself included), now is not the time to make judgments on what is the “right” type of protest or whether protestors are allowed to express their anger. Protest against racism in the United States has historically been pathologized, as we saw in the Civil Rights Movement and continue to see with the protests today. By pathologizing protest and casting resistance as something criminal to be avoided, we delegitimize activism and perpetuate the notion that only some folks (white folks) are allowed to resist.

It is important to realize that how we define a riot is racialized as well. As political scientist and professor of African-American studies at Princeton Naomi Murakawa explains in her book The First Civil Right, it’s not that crime has been racialized in the United States, but that race has been criminalized.

It’s also vital to recognize that not all of the protests are violent. Most have started out peaceful during the day and a select few have escalated at night. The violent protests that tend to make media headlines are not representative of the countless peaceful protests happening nationwide.

As Barack Obama and many others have emphasized, the recent events show that we cannot—and should not—expect or demand a return to normal. Normal right now is racist. It is a world in which Black people cannot run, go birdwatching, or even walk down the street without fear. And importantly, it is vital that the conversation around race and police brutality that the recent events have incited does not die down after media attention to the protests does. It shouldn’t take a tragedy to incite a national conversation about race. But now that it has, it is important that we maintain this dialogue and continue to back up our words with action even after the media spotlight on the George Floyd protests subsides.

I would be remiss not to emphasize the fact that my voice is not the one that needs to be heard in this discussion. As someone who is not Black, I cannot fully understand the extent of the daily struggles that Black people face in this country. However, I don’t see silence in the face of injustice as productive either. I firmly believe that people of all races and identities in this country need to take up this mantle.

So, if you are someone who does not identify as Black, next time you are reading a news article that condemns the current riots or expressions of anger, I urge you to ask yourself: Is this really what I should be critiquing? Channel your efforts toward supporting Black activists, contributing to funds such as the Minnesota Freedom Fund and the Chicago Community Bond Fund, and supporting (both verbally and financially) organizations such as the American Civil Liberties Union. And remember that regardless of your views on the protests, there are multiple ways to “show up,” including donating to the aforementioned organizations, starting conversations about race at your own dinner table, or attending the protests themselves.

Meera Santhanam is a third-year in the College and a Viewpoints Editor for the Maroon.