On and Off the Field: Vittorio Tricase Profile

Fourth-year running back Vittorio Tricase reflects on the future of his athletic career. 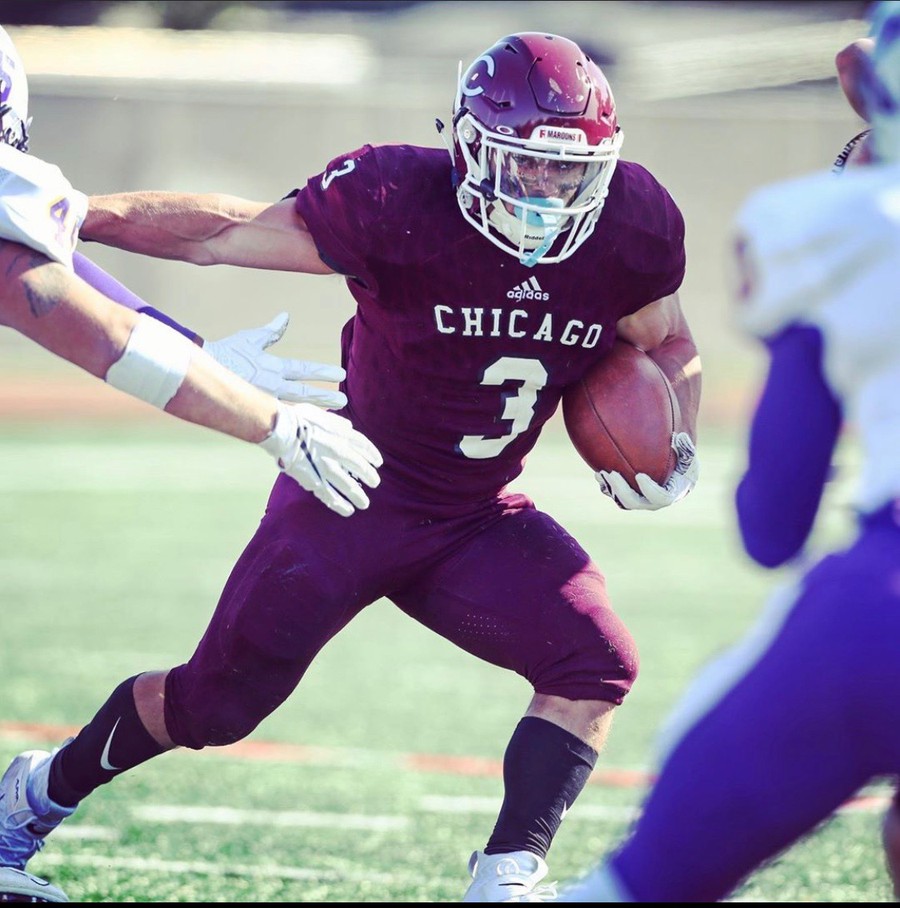 Between his successful career on the football field and ardent work in the weight room, rising fourth-year Vittorio Tricase exemplifies athletic mental perseverance. Although Tricase’s football career is over, he has high aspirations to launch a potential bid for the 2024 Olympics in powerlifting.

Tricase began his football career at four years old with an initial venture into tackle football. He has played as a running back his entire life, having an apt comfort with carrying the ball. After moving to Naperville in his middle school years, Tricase transitioned to a higher weight class. He went on to tote up several exceptional feats in his early days: playing teams from all over the country, competing in the National Football League (NFL) Hall of Fame Stadium in seventh grade, and being named the MVP at the eighth-grade national championship.

These accomplishments are not without effort. Tricase had a childhood affinity for the Rocky movie franchise, attempting a one-handed push-up after watching Sylvester Stallone’s titular character perform one. Following this, he began doing 50 push-ups and 50 sit-ups each night, increasing the amount annually. Tricase explained, “By eighth grade, I was doing 800 push-ups and 800 sit-ups every night.”

Tricase’s high school football career took off at Glenbard North High School, where he briefly shared a field with Los Angeles Chargers running back Justin Jackson. After recovering from a collarbone injury in his sophomore year, Tricase’s close relationship with his high school coach and ardent training led to two dominant high school seasons. He set his school’s record with 39 touchdowns in his senior year and had three games with over 300 yards of coverage, attracting the eye of several college coaches. After a decision between UChicago and Northwestern, Tricase chose to take an offer from UChicago, valuing academic rank and playing time.

Creating a bond with upperclassmen, Tricase began to get into the stride of his college career. While Glenbard North used many heavy-offense plays, UChicago favored a spread offense, with frequent passing. Tricase quickly adapted to the change in environment, noting, “I got close with older guys on the team. Chandler Carrol, one of the best running backs at this school, mentored me. I spent time with him learning from his football experience and increased my own football IQ.”

Following his first year, Tricase was named starting running back in his second year. This was followed by a hamstring injury that should have kept Tricase out of games for the entire season. However, after intensive rehabilitation and strength training, Tricase recovered in six weeks. He played in three games with breakout performances. In the Maroons’ 2019 game against Cornell College, Tricase set a school record for the longest touchdown run with an impressive 95-yard run.

Tricase’s successful performances do not come without an appreciation for the training. “It’s an unpopular opinion, but my favorite part of football is the two-week summer camp. We train during the hottest part of the day and are busy from 8 a.m. to 8 p.m., always doing something. But during those two weeks, we as a team get closer and build a culture that allows us to succeed.”

While the University intends to host a socially distant form of autumn varsity sports practices, Tricase, along with a majority of the fourth-year members of the football team, has opted to not report. “It’s bittersweet as we were all looking forward to our senior season. The thing that hurts me the most, is I didn’t know my last play would be the end of my football career. Cherish every moment as much as possible, as you never know which will be last.”

Tricase’s football career may be over, but he has high hopes for his powerlifting career. To anyone who frequents Crown’s weight room, Tricase’s presence in the weight room is a guarantee. When he’s not training himself, he can be found assisting teammates and others with their forms and technique. While Tricase started lifting in high school, his career ramped up in college with daily sessions in the weight room. During his first year of college, Tricase was squatting 485 pounds with one rep and benching 350 with one rep. In his second year, Tricase added the hex bar lift with an impressive 720-pound rep. Training intensely, he’s brought his squat up to 605 pounds and bench press to 465 pounds.

Tricase reflected on his lifting career: “There’s no limit on how strong you can be—just how much strain you can keep onto your muscles. With lifting, under the right training, there’s never a stopping point.”

Tricase’s lifting career is just taking off. He will be training over the next few years with the intention to pursue a bid for a spot-on Italy’s Olympic team in 2024. Tricase’s father was born in Bari, Italy, making Tricase eligible for the team as he has both Italian and American citizenship. Despite Tricase’s excellent performances at his seasoned lifting events, Olympic powerlifting is different, consisting of the clean and jerk and snatch. Tricase is currently working on building a foundation for these events. Through rigorous strength training, Tricase is tailoring his skills to the Olympic events. Once he gets his numbers up for these foundations, he plans to work on the technical nature of snatches and clean and jerks.

Following the end of his football career, Vittorio Tricase is seeking a new challenge to motivate himself. He noted, “With football over, I’m now onto the next game. The Olympics give me a goal to push myself and drive forward.”