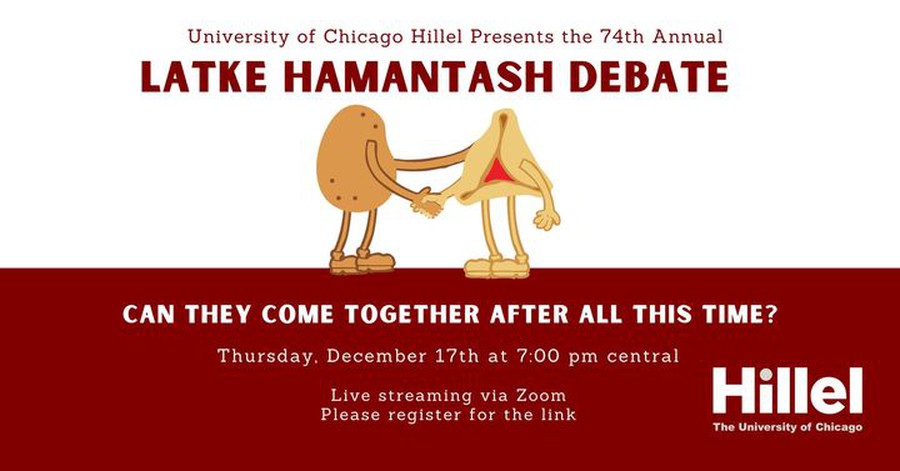 On Thursday, December 17, the 74th annual Latke-Hamantash Debate took place over Zoom instead of at its typical location in Mandel Hall. The event, held by UChicago Hillel, seeks to answer the question of whether the latke, a potato pancake fried in oil, or the hamantash, a triangle-shaped cookie typically folded around poppy seed or prune filling, is the superior food item.

According to Hillel Rabbi Anna Levin Rosen, the debate was broadcast to more than 500 viewers who had registered online. This year’s event opened with violin music courtesy of third-year Ben Gerhardt; after remarks and the lighting of the Hanukkah candles, the speakers began their odes to the traditionally celebratory foods.

Levin Rosen compared both foods to the samosa, whose triangular shape and potato filling give it similarities to both foods. The samosa “bridges the gap between the latke and the hamantash,” she said.

Levin Rosen ended her speech by raising the possibility that there were other topics related to Jewish food worth considering, such as a lack of understanding of Jewish food-related customs. She mentioned an instance on The Great British Bake Off of a host suggesting that a braided loaf would taste delicious on Passover, a holiday on which Jews do not eat leavened bread. After she finished her remarks, the debate began.

David Pincus, an assistant professor of molecular genetics and cell biology, started by taking a strong pro-hamantash stance. “Perhaps a shared evolutionary history could be the basis for reconciliation between latkes and hamantashen,” he said. Pincus said that the words “latke” and “hamantash” were used in roughly equal amounts until 1946—the year of the inaugural Latke-Hamantash debate—when the usage of “latke” skyrocketed. Pincus considered this undeniable proof that “latkes have won the propaganda war.”

Yet to Pincus, the hamantash was the superior snack, and he mused on what lovers of the cookie could do to address the latke’s hegemony. “Do we retreat into a social media bubble of alternative facts and anti-latke memes?” he asked. “Latke her up! Latke her up!” He concluded that the only real way for the hamantash to regain its prestige was to “find a way to come together” with the latke.

Kafi Moragne-Patterson, who leads the University Community Service Center’s programs, then argued in favor of the latke. Unlike Pincus, Moragne-Patterson dismissed the possibility of reconciliation. “I cannot in good conscience promote opium-filled delicacies,” she said at the end of her speech.

Moragne-Patterson presented data she had gathered of both latke- and hamantash-lovers around Chicago. She found that the latter group were an exclusionary people associating more with the North Side of Chicago. “They were rigid, like the boundaries of their cookie,” she said. On the other hand, latke-lovers, associated more with the South Side of Chicago, tended to dress better and pronounced “Valois” the right way.

Dennis Carlton, an economics professor at the Booth School of Business and the event’s swing debater, presented a hypothetical scenario in which firms representing the latke and the hamantash were considering a merger.

Donning a menorah-shaped hat, Carlton listed his qualifications to the audience, as well as the relationship he had with both firms. “It’s…true that I’ve been in a lot of financial transactions with interested parties,” he said. “By that, I mean I’ve lived in several places and I’ve eaten in a lot of Jewish delicatessens.” He speculated on the new products the proposed merger could create, pulling up mock-ups of a “lamantash”—a latke with poppy-seed filling—and a face mask made of two latkes bordering a central hamantash.

But Carlton eventually determined that merging the foods’ respective holidays of Hanukkah and Purim would have bad consequences.

“I’ve spoken to my grandchildren about what I’m doing tonight, and they said, ‘Are you kidding, zayde? You merge the holidays, there may be fewer days of Hanukkah? We get eight days of presents. No way you want to merge anything.’” In the end, Carlton decided against the merger, praising the differences between the foods and the holidays.

The event ended with an online poll asking which side had won the debate. (“Everyone” was the answer that took home the most votes.) Guests thanked the speakers through the chat feature before logging off from an abnormal, yet characteristically irreverent, Latke-Hamantash Debate.