Ardy Taveerasert and the Magic of Ping-Pong in Chicago 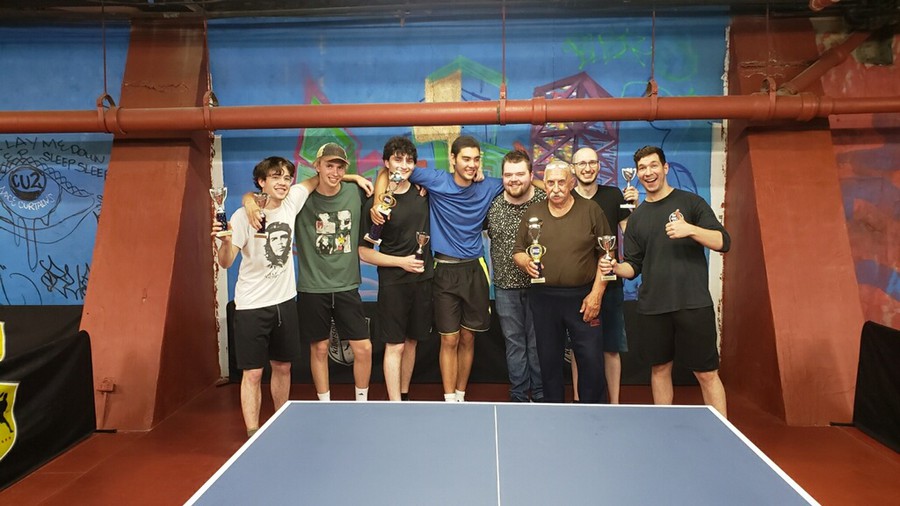 The participants of the Chi-Slam Division 5 Spring Tournament.

The mysterious beauty of Chi-Slam Table Tennis Club begins with the entrance to the gym’s building. It’s unmarked. One can often find first-time players dressed in neon shorts and headbands wandering around outside, looking for a sign that isn’t there.

The ping-pong gym proper sits in the basement of the three-story building; you have to walk down a narrow, twisting staircase before it becomes possible to make out the ping of plastic balls and the rubbery smell of tables and paddles. Getting into Chi-Slam feels like you’re doing something illegal, honestly. But how to get in in the first place? Well, you have to call the owner, Ardy Taveerasert. He’ll emerge from downstairs, and unlock the unmarked front door for you.

Taveerasert was born in Thailand. He emigrated to Bethesda, Maryland, in 1993, then moved to Chicago five years later. After marrying his wife, Anne, in 2001, he opened a flower shop called Mr. Flower in West Town. Business was alright, but not great, so Taveerasert added ping-pong tables to the store, available to rent by the hour.

The move wasn’t completely random. In his youth, Taveerasert was a semi-pro player in Thailand, playing for his school and dreaming of competing for his country. He took up ping-pong after an injury prevented him from competing at his first athletic loves, soccer and boxing. At first, he hated the sport; his brother would win every match they played. But Taveerasert was determined. He practiced every day for weeks until he was able to beat his brother. In doing so, he fell in love with ping-pong.

The need to provide for his family prevented Taveerasert from joining the pro ping-pong circuit. Even after settling down in the US, Taveerasert had little time for recreation. But then came the rental ping-pong tables at Mr. Flower. Suddenly, work and recreation were combined. Taveerasert thought the move might attract customers. “You have to be unique in order to survive and have fun,” he told the Chicago Reader in 2013. But it was also just a chance for him to play again. He offered open-play hours and private lessons, and within a few weeks was hosting a local ping-pong club called Chicago Chi-Slam.

In 2018, Mr. Flower closed down, and with it the makeshift ping-pong studio. Local papers lamented the loss of one of Chicago’s most unique stores, but, as Taveerasert said at the time, the rent had simply gotten too high. Fortunately, all was not lost for the Chi-Slam Table Tennis Club. Taveerasert became the head of the club and began renting another space about a mile north in Wicker Park. This time, he devoted his business entirely to ping-pong.

Currently, Chi-Slam is operating on an appointment-only basis, both because of the pandemic and because Taveerasert likes to know who’s going to show up ahead of time. This is part of the reason he doesn’t bother with a sign outside the gym. “People won’t walk around to find your business anymore,” he told me over the phone.

You can pay for private lessons at Chi-Slam (Taveerasert is an amazing coach, and he revels in showing newcomers how good he is), but Chi-Slam peaks during its open-play hours. Yes, they still exist, even though the gym is technically appointment-only; strike up a rapport with Taveerasert, and he’ll begin slipping you the times soon enough.

Open-play is a sweaty, joyful affair. After ten or so minutes of warm-up, the players find someone around their level and start a match. After they finish, they play again, or find new partners. That’s it, really. The matches are one-on-ones; two serves at a time, first to 11 wins. Win by two. If you’ve joined an official Chi-Slam division, people may take things more seriously, but the competition is never too much to bear. People play around with weird serves and trash-talk each other’s forehands. You might battle a 20-something from the South Side, or a 70-something from Bulgaria. “Chi-Slam has become an international table tennis club,” as Taveerasert told me proudly.

Taveerasert himself likes to wander around during open-play: texting on his phone, taking in the matches, showing his missing front teeth with trademark smiles. Though the man took a long break from ping-pong, he has been coaching for a long time as well. He’s given lessons to thousands of students—more, he claims, than anyone else in Chicago. Taveerasert is 60 years old and says that in ten years he will retire. But that’s a long way off. For now, he’s content in his world of plastic balls and customized paddles, happy that Chi-Slam continues to show the world—or at least one Wicker Park basement—what a magical sport ping-pong can be.