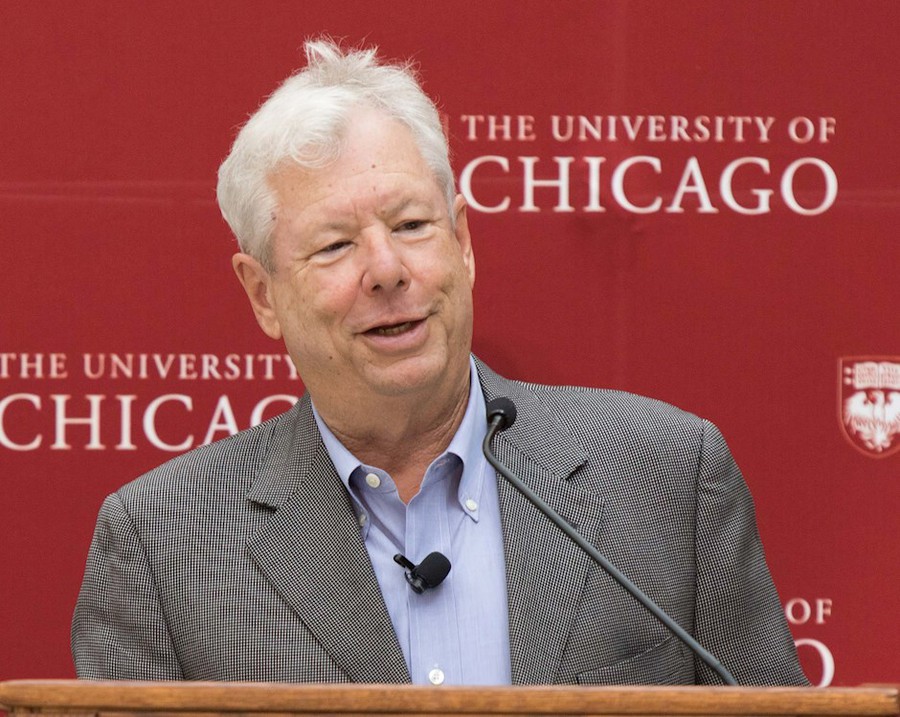 Professor Richard Thaler of the Booth School of Business gave an open lecture on November 3 about his and his cowriter Cass Sunstein’s 2008 book Nudge and its new edition, Nudge: The Final Edition, released this summer. He gave an overview of his main concepts from the book, dove into a few real-world applications, and finished with a Q&A. Since its original publication, Nudge has caught the policy world by storm and has generated much conversation in the field of behavioral economics.

The seminar was hosted by the Chicago Booth Center for Decision Research; its faculty director, Professor Nicholas Epley, introduced Thaler. Around 500 attendees watched the seminar in person, while more than 4,500 additional viewers registered to watch through Zoom.

Epley began his introduction by speaking to Thaler’s impact on his field, saying, “Thaler does great work, but I also consider him a force for good for his contributions to behavioral science [as a whole].” He also noted that Thaler’s contribution to economics has “not been to show economists how stupid people are, but rather to show economists how human people are, with our strengths and our weaknesses, in order to design models and policies and approaches to help people live better lives.”

Thaler began his talk by explaining the concept of choice architecture and defining the terms “nudge” and “sludge.” A choice architect, he said, is “anyone who defines the environment in which people make choices.” An example he gave was grocery stores’ strategy to place a high-demand product, such as milk, in the back of the store. This forces customers to walk past other products, so they are more likely to purchase them.

His book’s new edition expands on the previous, foundational concept of “nudge” to add the concept of “sludge.” A nudge is defined as “any aspect of the choice architecture that alters people's behavior in a predictable way” by making desirable behavior easier. A sludge does the opposite: it makes a process difficult “in order to arrive at an outcome that is not in the best interest of the sludged.” Thaler said, “Nudging for good, and sludging for bad.”

He brought up three main examples of automatic enrollment: organ donations, insurance choices, and social security. For example, with organ donations, a distinction is made between presumed consent (through an opt-out default system) and explicit consent (through an opt-in default system). Thaler argued that “presumed consent does not save lives” because when comparing the organ donors per 10,000 deaths of opt-in countries and opt-out countries, the opt-in countries have more donors. He says that using nudges to incentivize donors to opt-in, rather than an automatic enrollment system, actually garners more organ donors.

In the Q&A after the lecture, an audience member asked, “How should we use behavioral economics and nudging to fight climate change?”

In response, Thaler said that nudging would not be enough to fight climate change because nudges would only produce small-scale changes, rather than large-scale ones.

“We are not going to win this battle with nudging,” he said, and he argued for pricing carbon, urging governments to enforce a high tax on carbon. “If something is free, people consume too much of it.”

He ultimately suggested that large-scale policy taxes on private companies would be the most beneficial: “If we’re going to get the big guys to make the right decisions, we’ve got to set the prices right.”