With Bug, Steppenwolf Theatre Stages a Bold and Electric—If Overwhelming—Return to In-Person Shows 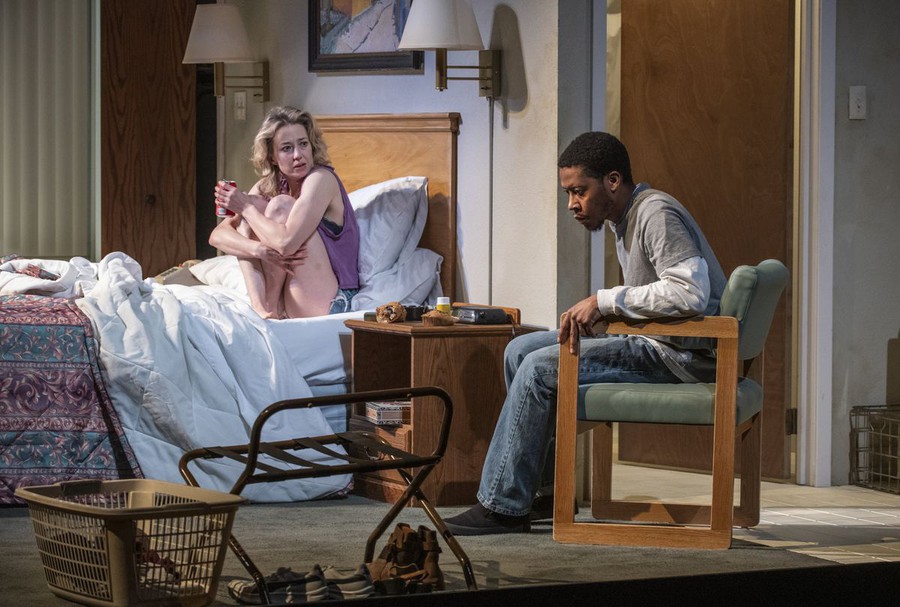 Lincoln Park’s Steppenwolf Theatre Company roars back to life this month with Bug, an electric revival of ensemble member Tracy Letts’s acclaimed 1996 play about trauma, conspiracy, and bedbugs collapsing in on the occupants of an Oklahoma motel room. While Bug’s explosive second act risks alienating more timid viewers, the production is bold and unflinching, drowning its more familiar aspects in a barrage of fiery commentary on race, government power, and love ripe for our 21st-century moment.

The play follows Agnes (Carrie Coon), a waitress living in an Oklahoma motel, who enters a relationship with Peter (Namir Smallwood), a drifter on the run from mysterious forces. The two struggle to unpack their trauma as they become obsessed with the blood-sucking insects that seem to have infested their motel room. The production takes on aspects of the grotesque as it progresses into an expansive, even overly ambitious, dialogue on the boundaries between well-founded fear and paranoia. David Cromer’s sharp direction and the production’s rapid-fire pace are enough to forgive the script’s occasional reliance on familiar archetypes to structure the beats of the story. Episodes involving Agnes’s abusive ex-husband, Goss (Steve Key), feel unoriginal, while the prescience and clear-sightedness of Smallwood’s character flirt with the “Magical Negro” convention, especially in the first act.

Bug is the first production from Steppenwolf after 20 months of closure due to COVID-19. The play ran for two weeks in February and March 2020 before the pandemic forced the ensemble company to close its doors. But with newfound vigor and palpable zeal, the 2020 cast is back on the stage.

The feeling of real, in-person entertainment is electric. Before the show, the house is packed, and it thrums with anticipation. Patrons, all of whom have demonstrated proof of vaccination at the door, shuttle back and forth between two full-service bars. When the house lights dim and the stage lights rise, the audience is spellbound, held to perfect silence. Maskless, living, breathing actors—alternately clothed and unclothed, bloodied and unbloodied—move across the stage with a kineticism that feels matchless after months of in-home entertainment.

It’s hard to imagine that this production of Bug was originally staged before the pandemic. The entire play takes place within Agnes’s motel room; a sort of pandemic-era claustrophobia binds the production from the moment Agnes smashes her cigarette and locks the front door. So too does the play’s commentary on race and government feel engaged in a direct dialogue with the Black Lives Matter movement that took center stage in summer 2020. Smallwood’s Peter, who might’ve been the victim of government experimentation, is cast as a Black man. The decision opens up a rich dialogue on how generational trauma and abuse of Black bodies compounds fear and paranoia.

Despite the dominance of these conversations in the contemporary art scene, Bug feels decidedly original, perhaps because it draws on a 25-year-old source. The production avoids an easy or neat conclusion. It’s unafraid to leave its audience puzzled or desirous of a more obvious moral statement. In fact, the sheer number of possible explanations, especially of the play’s second act, raises the question: Can one even construct a single, coherent interpretation? Thematic commentary—on race, class, love, grief, paranoia, government abuse, mental illness, drug use—all overwhelms the viewer. The consequence, perhaps, is that the play loses some of its clarity and coherence, leaving the members of its audience with a sort of Rorschach test on which to project their own existing views.

The production’s run is short and ultimately not worth missing. I attended the press viewing with a friend, and the two of us made a night of the trip north: Lincoln Park is home to a number of upscale but not unreasonably expensive restaurants, and the scene, while residential, is alive later into the night. No doubt Steppenwolf helps drive the neighborhood. The company’s recent campus expansion includes a modular theater, dedicated educational spaces, and two full-service bars.

Anyone looking for a night away from campus could do a lot worse than the transfixing and resonant—if occasionally perplexing—Bug, playing now through December 12 at the Steppenwolf Theatre Company.