Arts reporter Evan Williams gives us the lowdown on why The Office Experience is not-so office-like after all following its recent opening on Mag Mile. 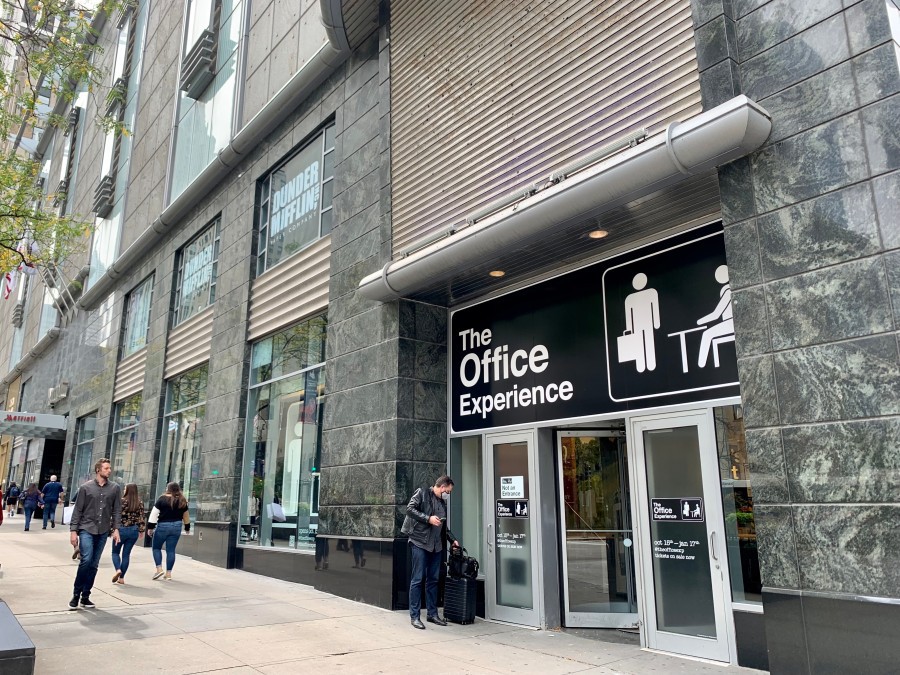 Growing up, I spent hours upon hours, days upon days, in my dad’s office. Most afternoons when school was over, I’d meet him off the bus and start my homework while he took meetings. There were cubicles, printers, phones, and the mechanical rumblings of a busy workspace. There was a breakroom, and there were people. None of it was flashy, but it was comfortable.

It was this formative memory that led me to The Office during my senior year of high school for familiarity and distraction during the college application season. I loved the show because it depicted with near perfection the zany mundanity of an office setting, a less sentimentally tinged version of my dad’s office. There was nothing flashy; that’s not where the zaniness came from—it was from the cubicles, the printers, the phones, the mechanical rumblings of procrastination and productivity alike, the breakroom, and the people. The Office was never about the product, never about the profit of the paper industry, at least not really. Sure, you could point to the first major narrative arc and argue that the Scranton branch’s fight against downsizing is ostensibly about profit margins, but the show’s value never relies on such considerations. More often, it’s about the ways Dunder Mifflin’s employees subvert productivity and how their lives find meaning beyond ostentation.

I was thrilled to get the chance to cover The Office Experience, an interactive exhibit by Superfly X that recreates the set in its entirety as well as a number of famed scenes from the series, including Pam’s hot coal walk, Kevin’s chili spill, Flonkerton, and even Jim and Pam’s wedding. I invited my roommate, and we made our way to the event’s Michigan Avenue address.

Guests arrive at a corner building on the Mag Mile, the outside digitally draped with the quintessential stick-person logo that closes the show’s intro theme. Entering the building, the Chicago soundscape disappears, and you’re in the Warehouse. Well, you’re in the gift shop, which is sparse and mostly concrete in an effort to make it look like the Warehouse. It has a few shelves with reams of paper stacked high and some bubble wrap. It’s neighbored not by stairs to Dunder Mifflin’s corporate space but by escalators to take visitors to the beginning of the experience.

General ticket prices range from $37.50 to $55.50 depending on when you plan to go and whether you want a personalized ID badge—a card with the Dunder Mifflin insignia, your name and photo, and a “Security Threat” status. The tour begins with a mini-museum of The Office memorabilia—props, costumes, and the like. It’s something of an aperitif, and it worked—I was chomping at the bit to get “on set” by the time my friend and I were through. Reading the last of The Office’s employee résumés, we tiptoed into the entryway of Dunder Mifflin, pausing to have our photo taken in front of the sign by one of the many employees stationed throughout The Experience. Then, we were there, right in the thick of it. To my right was Pam’s desk, complete with jelly beans; to my left, Michael’s office, door ajar; straight ahead, Jim and Dwight’s desk block, Phyllis and Stanley’s behind that, and the break room yet farther back. It should have been an awesome moment, but it felt off.

We were shepherded through the layout, pausing to take pictures in each of the major spaces—at Michael’s desk; in the conference room, decorated with “It is your birthday” signage; in the kitchen; at Toby’s desk; and in the break room, where we were encouraged to pose menacingly with a chair opposite the vending machine in homage to Kevin’s destruction of the very same machine during a fire drill in “Stress Relief” (Season 5, Episode 14). We posed for a Flonker-ton picture with our feet strapped into boxes of paper, ran across the hot coals made famous in “Beach Games” (Season 3, Episode 23), visited Schrute Farms, danced down the aisle of the chapel in which Jim and Pam married, and each filmed a confession before being let out into the Warehouse—the gift shop.

I couldn’t figure out why The Experience felt so dry, so empty. It wasn’t that I didn’t enjoy it, and it wasn’t that I was underwhelmed by any particular element of the exhibit. While waiting to interview Superfly’s vice president of marketing, Jamaal Orr, about The Office Experience, I walked around the gift shop, where reams of Dunder Mifflin–branded copy paper were being sold for $9.95 a pop (which is, by the way, about five times the average price of a ream of copy paper). It was there, with a view out onto the Mag Mile from the Warehouse/gift shop, that I realized it was the posture of the entire thing that put me off, not any one piece.

Speaking with Orr, I brought this just-formed thought to the table. I asked him what the artistic process was like trying to make a spectacle of something that thrives on mundanity. As the project’s marketing lead, he admitted to having little answer to the question, but he told me that the show’s fans don’t need spectacle; they want to feel the mundanity. That’s what they come for, and that’s what the company sought to deliver. I countered, asking why, if the point was to bring the mundanity to the fore, The Office Experience was held in a gorgeous corner building in downtown Chicago rather than a dull office building in a suburb. Here, Orr felt more comfortable sharing an answer, as it was a problem of engagement. In short, the decision was natural—this is where people would be, and this is how they would attract visitors.Though Orr wouldn’t confirm, our tour guide told us that the exhibit would be staying past its current closing date of January 17 and that there are expansions to Dunder-Mifflin’s hometown, Scranton, as well as nearby Philadelphia in the works.

Stepping back into Chicago’s soundscape, I felt scammed. It’s precisely what makes The Office great—its mundanity—that prevents it from being used as a spectacle. By attempting to do just that, Superfly X muddles its mundanity, ruining the spirit of the series itself. The Office Experience is extravagant; it is out of place; it is thorough in its exhibition but lazy in its adherence to the values of the series. It is above all else a cash grab with good lighting for group photoshoots in front of a familiar and widely popularized backdrop. I took photos, but I did not buy a ream of copy paper.