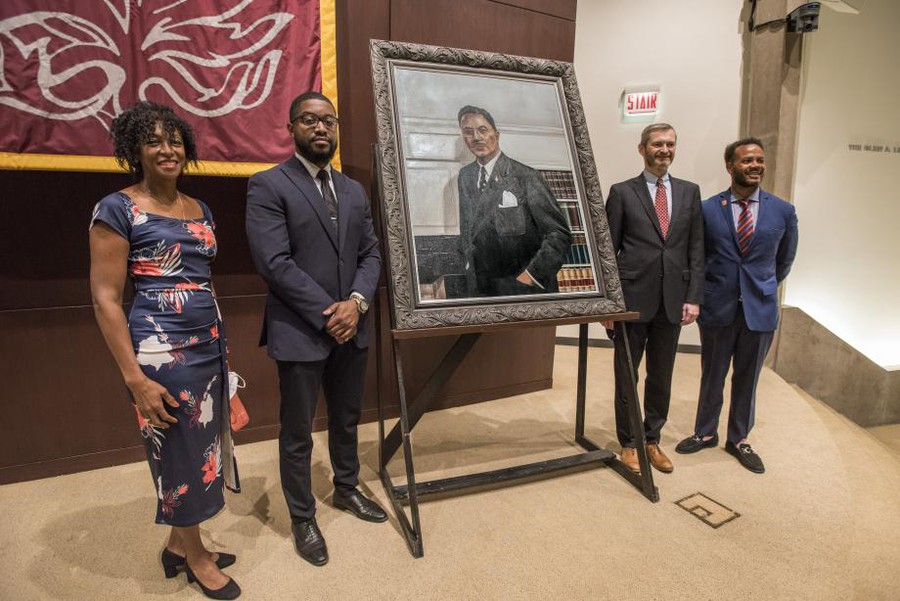 On Monday, September 27, the University of Chicago Law School unveiled an oil portrait of Earl B. Dickerson, the school’s first Black graduate and a colossus in law.

The painting of Dickerson joined a collection of portraits adorning the main hall of the law school, including those of former U.S. Attorney General Edward Levi and prosecutor Bernard Meltzer. These portraits have accumulated as law school graduates have petitioned for the school to commission paintings of beloved law school professors. According to Law School Dean Thomas J. Miles, the portraits serve to “recognize an outstanding individual.”

During his time at the Law School, Dickerson served as a lieutenant for the U.S. Army in WWI, delaying his graduation until 1920. As a civil rights attorney, Dickerson’s most famous case was the Supreme Court case Hansberry v. Lee, which changed the landscape of Chicago by allowing Black residents to live in the formerly segregated Woodlawn and Hyde Park neighborhoods. Lorraine Hansberry, a member of the Hansberry family, based her acclaimed play *A Raisin in the Sun* on her experiences in the case.

Dickerson also helped draft the articles of incorporation for the Chicago-based Liberty Life Insurance Company of Illinois (later known as the Supreme Liberty Life Insurance Company) which became one of the largest Black-owned life insurance companies in the country. Later in his career, he served as acting chairman on Franklin D. Roosevelt’s first Fair Employment Practices Committee.

In 2020, a group of law school faculty members organized a conference to celebrate Dickerson’s legacy on the 100th anniversary of his graduation from the law school. The conference, which was scheduled to take place during spring 2020, was postponed to autumn 2020 due to the COVID-19 pandemic. Miles said that he was “delighted to have the opportunity to celebrate [Dickerson]” and to “inform today’s students and students of the future” of Mr. Dickerson’s achievements.

Shawn Michael Warren, a Chicago-based artist known for his much-acclaimed mural of Oprah Winfrey, painted Dickerson’s portrait. Warren is represented by Gallery Guichard, a local art gallery that is headquartered in the same Bronzeville neighborhood that the Supreme Life Insurance Company was located in when Dickerson worked as general counsel for the company in 1921.

Several members of Dickerson’s fraternity, Kappa Alpha Psi, attended the portrait’s unveiling. At the unveiling ceremony, Miles read part of a letter that Dickerson wrote in 1985 to the then Dean of the Law School, Gerhard Caspar, to accompany the establishment of the Earl B. Dickerson Endowment Fund—a scholarship for UChicago Law School students.

“I vowed that in every way I could I would battle to make the Declaration of Independence and the Civil War Amendments to the U.S. Constitution speak the truth: that all men are created equal,” he wrote in the letter. Dickerson also wrote about his time at the UChicago Law School: “It was my good fortune to be able to enroll in and be graduated from the University of Chicago Law School, and to be taught by such splendid students and teachers of the law as Dean James Parker Hall, Floyd Mechum, Harry Bigelow, Ernst Freund, Judge [Edward] Hinton, and Professor [Frederic Campbell] Woodward.”