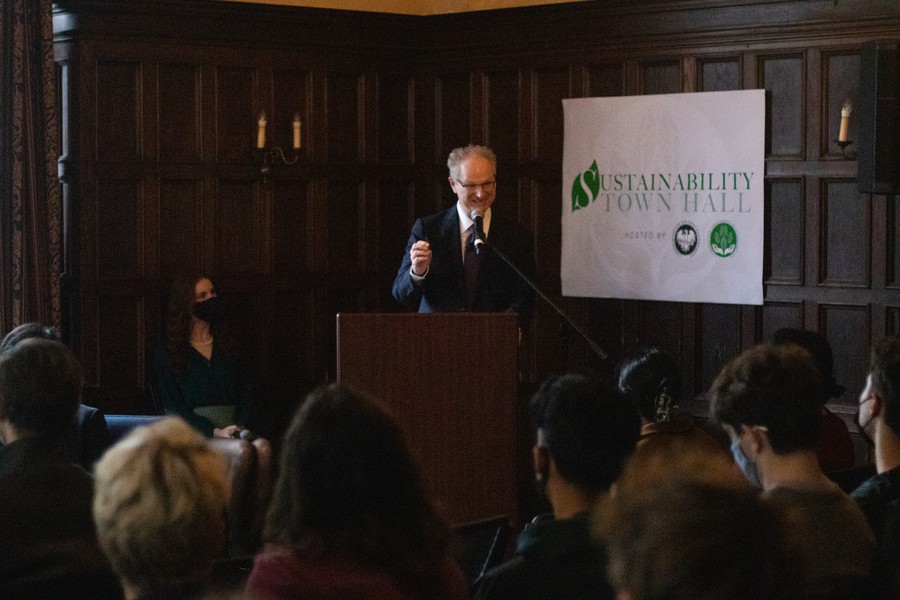 The University has no plans to divest its endowment from fossil fuels or set a deadline for carbon neutrality, President Paul Alivisatos said in a public sustainability town hall hosted by the Undergraduate Student Government (USG) on Wednesday, December 1.

In his first remarks during the town hall, Alivisatos expressed his commitment to campus sustainability.

“The topics of climate, energy, and sustainability are some of the hardest challenges that we will face as global societies,” he said. “It’s one of the issues where we really want to see the impact of the University become stronger.”

Alivisatos announced that he has formed a new faculty group in an effort to tackle issues of sustainability and “to do planning around new academic visions and where we want the University to go.” In the early stages of planning, the faculty group will work closely with a group of students.

A great number of questions were submitted from the audience about fossil fuel divestment, the subject of a new student-led pressure campaign. Commenting publicly for the first time on the matter, Alivisatos said that the University has no plans to divest from fossil fuels.

“Specifically saying that we will set a divestment goal because of climate policy issues is one that won’t be achievable for me or for the University at this time,” he said.

He said that only a “small fraction of the endowment” is currently invested in fossil fuels, “and it continues to decline.”

Alivisatos also said that the University has no plans to set a deadline to achieve net zero greenhouse gas emissions.

“We should be thinking hard if we can do more on the absolute emissions,” Alivisatos said. “We should pay attention first to make sure we believe we can achieve the goal that we have and [from there] understand where we can go further.”

UChicago Student Action, the student activist group organizing the ongoing fossil fuel divestment campaign, said in a statement that they are “greatly disappointed” by the announcement concerning divestment.

“UChicago Student Action is encouraged by the University’s sustainability goals, its commitment to funding student initiatives through the Green Fund, and the overall enthusiasm of students, faculty and administrators towards environmental issues,” the group wrote. “However, we are greatly disappointed by the lack of commitment to divesting the University’s $11.6 billion endowment from the fossil-fuel industry. Many of our peer institutions, including Harvard, Yale, and Columbia, have already announced plans to divest from fossil fuels.”

At the town hall, the 2030 plan was discussed extensively. At present, the University aims to halve emissions by 2030. Adam D’Ambrosio, the senior director of energy management within the University’s facilities services, said that from 2012 to 2020, there was “about a one percent reduction in absolute greenhouse gas emissions.”

D’Ambrosio identified the main goals of the 2030 plan as avoiding new sources of emissions, reducing emissions by making existing buildings as energy efficient as possible, and substituting high-carbon fuel sources for low-carbon ones.

D’Ambrosio said that campus expansion must also align with these goals with new buildings being LEED Silver certified and as energy efficient as possible.

“The cornerstones of our plan are minimizing the impact of campus growth, making our buildings as efficient as possible, and using renewable energy where possible,” D’Ambrosio said. “That’s what’s going to get us there.”

“Yes, we will do data transparency,” he said. “We will make the data we have available, and we’re interested in hearing ideas for how we can get more data.”

Fourth-year Terra Baer, a member of USG and one of the organizers of the town hall, said that she was satisfied with how the event went. Baer is also the Vice President of the Phoenix Sustainability Initiative, a student advisor to UChicago ECo, and involved in other sustainability groups on campus.

“A significant goal shared by student advocates over the past couple of years has been to bring people working on various aspects of campus environmentalism together to better coordinate and centralize our efforts,” she said. “Content aside, it is my belief that the town hall’s effectiveness in providing a forum for sustainability-minded students to interact with and hear directly from top administrators on issues that students have dedicated countless hours to addressing is incredibly valuable in and of itself.”

Fourth-year Allen Abbott, USG executive vice president of internal affairs and another organizer of the town hall, agreed that the event was successful. Abbott noted that this was the first time in at least five years that there has been a public town hall with the president of the University.

“There are a lot of trust issues between students and the administration right now, and we are doing our best to make productive movements on a variety of important issues while also making it clear to President Alivisatos and the administration that more needs to be done in order to rebuild some of the trust that has eroded in [the] past ten years,” Abbott said.

Abbott also said that USG will continue to advocate for full data transparency and divestment.

“I think it’s great that this is the first time that we have had a firm answer from the University on any degree of investment or any context on the actual nature of the endowment,” Abbott said. “But we’re going to push, at the very beginning steps, a specific percentage point of fossil fuel investment in the endowment and the exact rate of decline.”

Nonetheless, Abbott sees the direction the University is going in terms of progress toward improvements in key issues like sustainability as positive.

“Generally, we’re seeing a movement toward a more transparent university and a university that is going to be more welcoming to making policy changes in response to student proposals,” he said.