“We Are All at Risk of Getting Displaced”: Woodlawn Residents and Local Organizations Host Town Hall to Protest Gentrification 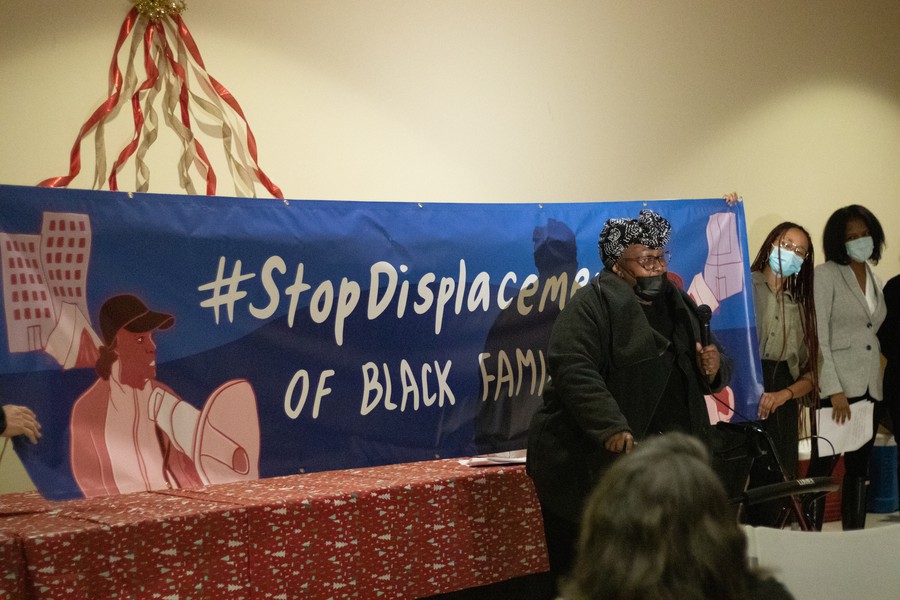 During a town hall on Saturday, speakers protested gentrification resulting from the construction of the Obama Presidential Center in Jackson Park.

Woodlawn residents and the Community Benefits Agreement (CBA) coalition jointly organized a town hall at Harris Park on Saturday, December 8 to protest gentrification resulting from the construction of the Obama Presidential Center in Jackson Park.

The coalition demanded that the City of Chicago and Department of Housing (DOH) commissioner Marisa Novara set aside 52 vacant, city-owned lots for development and housing to compete with luxury developers. Speakers emphasized that 75 percent of the new units should be affordable to Woodlawn residents and that the 52 lots should include the high-density lots on 63rd Street east of Cottage Grove.

A 2017 study conducted by the Institute for Housing Studies at DePaul University designated Woodlawn as a moderate-cost area with emerging displacement pressure. The designation indicates the presence of vulnerable populations within Woodlawn, rising cost of living, and high housing prices. According to the study, the community’s proximity to high-speed transit via the Green Line and the construction of the Presidential Center are raising Woodlawn’s previously stable rent prices, exacerbating the risk of current residents being priced out of their own neighborhoods.

“I’m ecstatic about the Presidential Center’s location in Woodlawn, especially since Obama was our first African American president,” said Woodlawn homeowner John Odom in an interview with The Maroon during the town hall. “I just hope he doesn’t unintentionally displace his own African American community and cause an influx of Gold Coast residents. 63rd Street was once a thriving, safe African American community, and I would like to see the Obama library bring back some of that.”

Patricia Tatum, a longtime Woodlawn homeowner and former nurse at UChicago Medicine, suspects that rising property taxes and pressure from land developers may force residents such as herself to leave the community. She feels that government officials such as Mayor Lightfoot are apathetic to these threats and are willing to displace residents in favor of development.

“We should have a voice in what happens. Our vision isn't [the mayor’s] vision. Our vision is to have a diverse community that includes everyone that is here who wants to stay here,” Tatum told The Maroon.

With the development of 52 city-owned lots, the CBA coalition believes the space should be able to accommodate the construction of 1,000 affordable housing units, saving around 3,000 Woodlawn residents from displacement. The CBA coalition emphasized that the developments will, over all, be mixed-income with a diverse range of price points.

Speakers from both STOP and the CBA coalition also outlined steps the groups have already taken to prevent the displacement of Woodlawn residents, such as pressuring the city to pass the CBA ordinance last year.

The Woodlawn Housing Preservation Ordinance, passed in September 2021, committed $500,000 to the Renew Woodlawn program, which offers down payment assistance to low- and middle-income people purchasing homes within the community. In addition, Woodlawn residents have access to a new Homeowner Repair Grant program, which provides up to $20,000 for homeowners making less than $100,000 per year to use for repairs. The ordinance also grants Woodlawn residents a right of first refusal, which allows renters the opportunity to collectively purchase their building if the owner intends to sell.

“It took our coalition five years to get something passed to protect our residents,” said Woodlawn renter and CBA coalition leader Sharon Payne. “The Woodlawn Housing Preservation ordinance was a win, but it's nowhere near enough.”

Although recognizing the significant progress the ordinance symbolizes, the CBA coalition stressed that there is still more work to be done. Despite requests that the city set aside 200 vacant lots within Woodlawn for housing and development, the ordinance only granted 52. Further, the city never specified which 52 lots were to be developed, so there has yet to be any progress in creating affordable housing through the ordinance.

The CBA coalition wants to garner grassroots support for their movement by holding public meetings with residents and reaching out to them directly.

“A lot of the folks that came to today’s town hall came from us making phone calls to them,” Savannah Brown, a housing organizer with STOP and a member of the CBA coalition, told The Maroon. “We see the benefit of talking to community members, and even though it wasn't face to face, it was phone to phone. These are real people that we're reaching out to. So I think more initiatives that promote communication with other folks like that are good.”

Brown also said that the University should pay reparations to surrounding South Side communities for its history of gentrification by funding affordable housing.

“The University is greatly responsible for displacing folks, and so they should be doing their fair share if they want to live in the community and receive its benefits. If they're going to continue to bring in things in the community that further pushes residents at a disadvantage, they need to do something to counter that.”

Since May 2015, UChicago has helped plan and fund the construction of the Obama Presidential Center. Construction on the Center began this past August.