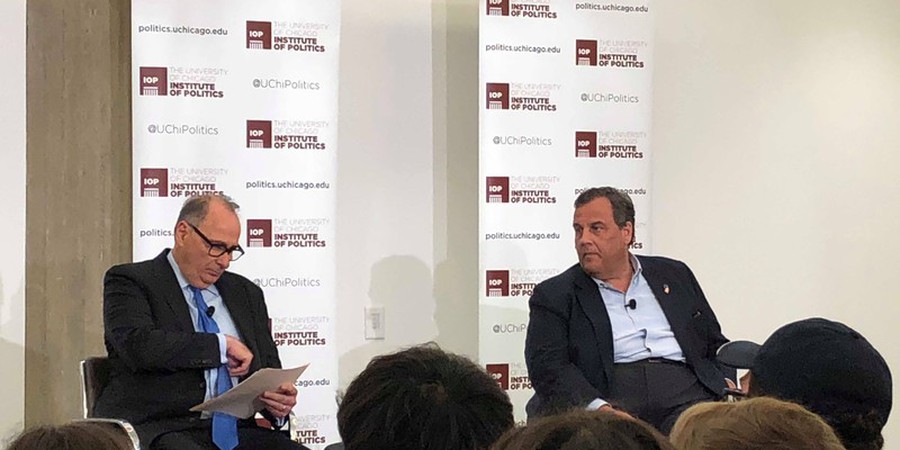 Former New Jersey Governor Chris Christie and Institute of Politics Director David Axelrod in conversation at the University of Chicago in 2018.

Courtesy of The Gate

Chris Christie served nearly seven years as the U.S. Attorney for the District of New Jersey and two terms as New Jersey governor before an ill-fated run for the 2016 Republican nomination for president. Throughout, Christie’s political priorities have included fiscal reform, public health, and education.

On November 18, Christie spoke with Institute of Politics Director David Axelrod about the Republican Party, Donald Trump, and his own battle with COVID-19 during a live taping of the Axe Files podcast. Christie’s appearance was a part of a speaking tour promoting his new book, Republican Rescue: Saving the Party from Truth Deniers, Conspiracy Theorists, and the Dangerous Policies of Joe Biden.

When asked at the beginning of the event whether recent gubernatorial election results in New Jersey and Virginia demonstrate a Republican Party that is more hopeful than hapless, Christie spoke honestly. “I think we understand that we’ve got some challenges,” he said of the Republican Party, specifically mentioning that in 2018 and 2020, many suburban educated voters who had previously voted Republican no longer did so. Christie explained that these trends paint a worrying picture for the party moving forward.

Donald Trump’s “extraordinary” election, Christie emphasized, was made possible because of Hillary Clinton’s unpopularity. “I remember telling [Trump], ‘Recognize that you didn’t win this election; Hillary Clinton lost it.… [In] four years, this is going to be about you,’” Christie said. “[Trump] always is looking for the vendetta, for the grievance that he wants to either shine a light on or remedy himself, and I don’t think that that’s a winning formula for the [Republican] Party.”

Axelrod was more skeptical than Christie that prominent Republicans could speak out against Trump. Axelrod noted that after Representatives Liz Cheney (R-WY) and Adam Kinzinger (R-IL) criticized the fraudulent narrative that the 2020 election was stolen, House Republicans shunned them both. “You’re betting that people are going to move away from Trump,” Axelrod told Christie, “and he’s sitting there in the 80 [percent approval range] among Republicans.”

Christie replied that those approval ratings might be masking people’s true feelings. “A lot of people in Congress work out of fear…because they want to keep their titles…What [my] book is meant to do is give people cover that if I can [criticize Donald Trump] and live…then they can too,” he said.

In Republican Rescue, Christie criticizes Trump and former vice president Mike Pence’s handling of the pandemic. “Too little. Too late. Too much denial. Not enough fact facing. Too sunny. Too disconnected from the frightening realities of people’s everyday lives.… None of [President Trump’s] actions gave Americans the confidence they craved in a crisis that their president was doing everything he could,” he wrote.

During the event, Christie said he suspected many lives could have been saved by a different approach to the pandemic. “[Trump] wanted to be perpetually optimistic,” Christie explained, “and my [response] to him was that ‘no one believes that…. You’re making people think that you’re out of touch.’” He said he had told Trump that “people want to see the leader” but that Trump’s resulting press conferences devolved into “rambling diatribes.”

Over the pandemic, Christie himself spent seven days in the intensive care unit after contracting COVID-19 in October 2020, a time about which he writes extensively and candidly in his book. “It is incredibly frightening,” Christie told Axelrod. “You are very much in your own mind.… I was thinking about my daughters—who’s going to walk them down the aisle if I’m not there? Who’s going to guide my sons on what it means to be a man and how to treat their wives and how to be a father?”

Christie acknowledged that the psychological toll of the pandemic may never truly be understood, even if people look back on this time many years in the future. He added, “A lot of people think—wrongly, I believe—that when we get past wearing all these masks and everybody is back to some sense of normalcy on COVID, we’ll get back to normal. I think that’s just when the first layer, the fog of war, goes away, and we see the real casualties that are left.”

Christie said, “Critical race theory is now being used as an umbrella phrase…for certain types of liberal agenda items that are being, in my view, pushed in the schools. I don’t believe that any child should be taught that one of the determining factors of how you treat someone sitting next to you is their race. And that’s clearly being taught in our schools now… to me, it’s just wrong.”

“What’s happening in the country right now is that parents, for the first time, because of the pandemic, are becoming really clued in to what their children are being taught in the classroom,” Christie said. “All of a sudden, the pandemic happened, and [parents are] sitting there and hearing it, and I think for a lot of parents in this country, it was disturbing.”

Axelrod also pushed Christie to explain discrepancies between his past actions and current stance on race and policing issues. Axelrod first explained, “You disbanded the [Camden, NJ] police department, and you rebuilt it around a different model, which is a lot of what police reformers are talking about.” Yet Axelrod noted that in Republican Rescue, Christie claims that Democrats “openly supported rioters burning our cities and looters destroying small businesses” during the Black Lives Matter protests in the summer of 2020.

“You’re always under pressure, whether you’re a Republican or a Democrat, to throw red meat to your base,” Christie answered. But he also stressed that he “heard many Democrats rationalize the violence.” He said, “The feeling I had in watching Portland, in watching Seattle, in watching Wisconsin [and] New York City [is that] when you blame the police, you demoralize the police…. You empower, to me, people who want to do bad acts.”

In closing, Axelrod pressed Christie on his denouncement of conspiracy theorists despite having fought for Donald Trump in the election. Axelrod asked Christie, “Where is the red line for you?”

“The red line was election night,” Christie quickly responded. “To me, it was sitting there at 2:30 in the morning…[seeing] him come out for the speech in the East Room of the White House, standing behind the Seal of the President and saying that the election was stolen, and then offering not one piece of evidence to support that.… You can’t undercut our democracy with no facts.”

When Axelrod then asked Christie about the potential of debating Donald Trump in a 2024 Republican primary, Christie said, “If I decide to run for President, I quite frankly don’t care who the hell else is up on the stage.”