The End of the Pipeline: Divest from Fossil Fuels 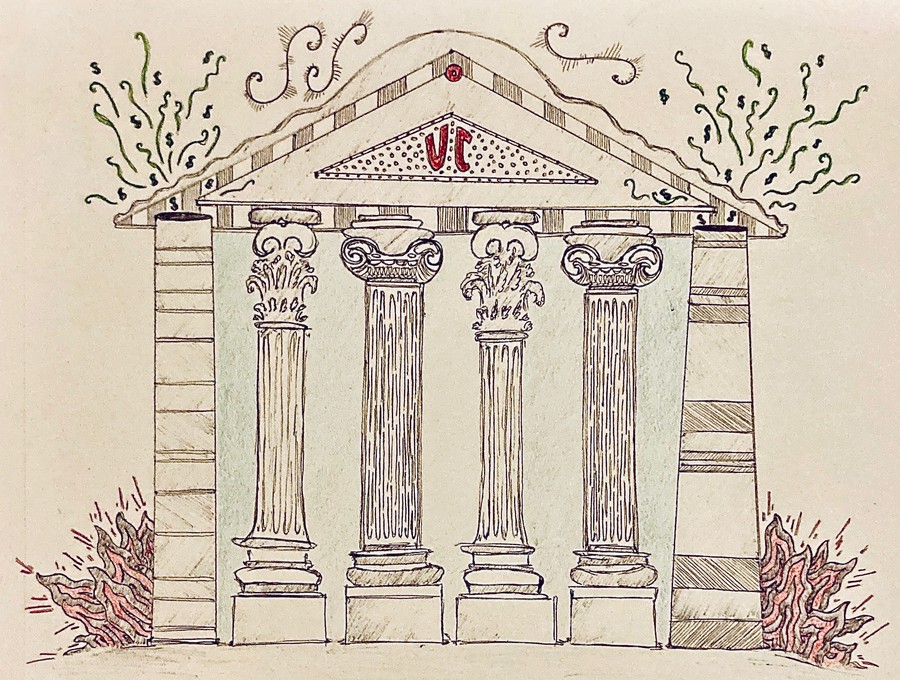 Last April, UChicago announced its latest greenhouse gas emissions target: a 50 percent reduction from baseline by 2030. The proposal centered around a transition towards renewable energy sources, supplemented by a focus on energy efficiency in new and existing infrastructure. Given that electricity use and natural gas accounted for over three-fourths of our total emissions in fiscal year 2020, reducing their usage appears to be one of the most effective ways to meet the University’s goal in the next nine years. However, the metrics by which we judge our progress are limited to the greenhouse gases that physically issue from our campus each year; the full extent of UChicago’s environmental impact stretches far beyond how the Office of Sustainability has chosen to define it. One of the University’s indirect effects on climate change—its investments in the fossil fuel industry—was recently called out by the Environmental Justice Task Force (EJTF), a student activist group. In a petition, the EJTF has demanded that the University of Chicago divest completely from fossil fuel–related investments over the next five years. Amid an avalanche of asset abandonments from academies across America, UChicago’s failure to forswear fossil fuel firms directly contradicts its professed commitment to sustainability.

UChicago defends these and other controversial investments by citing the 1967 Kalven Report, asserting that taking direct action on the heavily politicized issue of climate change would exceed its mandate as an educational institution. But the very fact that it has committed to reducing its environmental impact demonstrates that the University does not view the preservation of our planet to be a matter of social or political debate. The choice to reduce our dependence on oil and natural gas, after all, has nothing to do with our education—it pertains entirely to the University’s logistical and financial responsibilities. Such an action means that our carbon emissions would need to have been deemed, in the words of the Kalven Report, “so incompatible with paramount social values as to require careful assessment of the consequences.” If declining to purchase unsustainably generated electricity is a valid course of action, so is divesting from the industry that makes its production possible. Investment decisions are far more concrete than mere political statements, and the value of the fossil fuel industry is directly affected by the way large-scale investors like the University approach it. Whether through action or inaction, UChicago’s stance here will play an active role in the perpetuation or extinction of conventional energy sources. If our administration wants to act as though reducing our carbon footprint is an objectively good thing, then it needs to be prepared to follow through on that conviction.

As far as I can see, there are only two functional differences between divestment and reducing our direct emissions. The first is that UChicago’s indirect holdings in companies such as British Petroleum, Exxon Mobil, and Shell provide it with an active source of revenue. The University’s leadership is undoubtedly aware that, as renewable energy becomes cheaper and more scalable, continuing to rely on fossil fuels for campus operations will only serve as an optical and financial weight chained to its ankles. Regardless of the actual consequences of the 175,000 metric tons of carbon dioxide released into the atmosphere every year, the University’s transition away from fossil fuels was always inevitable, if only as a matter of financial and reputational practicality. If divestment was similarly pragmatic, it would’ve likely been pursued long ago. How UChicago decides to leverage its endowment is a much more telling indicator of its commitment to staving off climate change than how it manages its own infrastructure.

The other difference concerns UChicago’s public image. While emissions released as a result of campus activity are relatively easy to track down and measure, quantifying the effect of UChicago’s investments in coal and petroleum is a considerably more complex task. Consequently, even if the University were to decide to reallocate its endowment, any subsequent environmental benefits would be difficult to express in a concrete, digestible format. But this is only a problem if its objective is for people to see how its actions are having an impact. Divestment isn’t an inherently unjustified act—it has merit even if it isn’t being publicized. And in any case, the difficulty of communicating its effects should only help the University maintain the neutrality it seems to be so concerned with. After all, appearing socially responsible has no relation to the University’s alleged mission of inquiry and pedagogy; the only thing it benefits is its commercial profile and corporate reputation.

After over eight years of student activism and universities around the country setting an example, it’s inconceivable that UChicago has yet to seriously consider divesting from fossil fuel corporations. Despite the clear advantages, it continues to drag its feet. The only explanation for this behavior is that it perceives the costs of divestment to outweigh the benefits. Of those costs, though, the invocation of the Kalven Report hasn’t been properly substantiated, and so the only real loss would be any further returns on fossil fuel investments. This tells us that the University’s leadership believes at least one of two things: that such a financial setback is too high a price to take a stand against climate change, or that divestment doesn’t provide enough of a platform for virtue signaling. Either way, UChicago’s actions with respect to carbon emissions indicate a prioritization of its bottom line over the state of the environment.

The University, as a private institution, is under no legal obligation to alter its operations in response to the moral sensibilities of its students, nor is it compelled to follow in the suit of peer institutions across the country. What it cannot ethically justify, however, is letting short-term interests take precedence over its own core values. If the University is as committed to “rigorous and open scholarly inquiry” as it purports to be, it cannot deny that logical inconsistency is a bad thing—and the hypocrisy of claiming to pursue sustainability while treating it as secondary to profits undoubtedly qualifies as inconsistent.

It’s true that UChicago likely hopes to appease its conservative donors and prospective students who might be inflamed by a more definitive stance against the root causes of climate change. Whether or not it considers divestment from fossil fuels to be a political action, there is no guarantee that the world will see it the same way. Much of the University’s prestige stems from its tolerance of right-leaning views, especially compared to other institutions of its caliber; that image would undoubtedly suffer were it to abandon all support for oil and natural gas. Alienating some of its most profitable donors, moreover, would by no means be an easy choice for the University to make. The fact remains, though, that the practicality of staying silent doesn’t reconcile the contradiction between the University’s rhetoric and its actions. Wherever its true priorities lie—whether in the environment or in preserving its relationships with conservatives—it has a moral responsibility to be transparent about them with the donors and students who fund its activities. Even abandoning all pretense of altruism and openly declaring that its primary concern is lining its coffers would carry more integrity than how the University currently presents itself. But if the administration wants the right to portray UChicago as a pioneer in the fight against climate change, it must shoulder the responsibility of making real sacrifices in order to have a real impact.