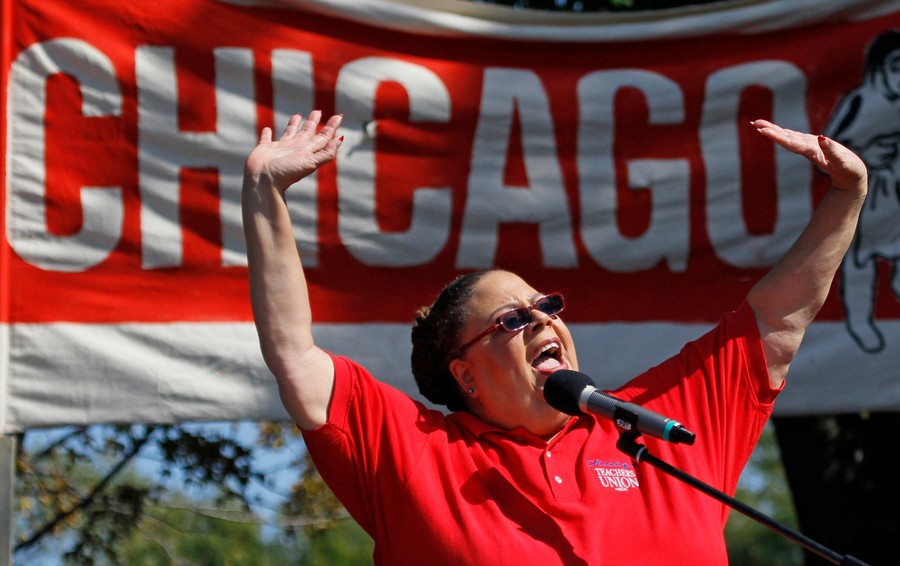 Karen Lewis, who gained national attention for spearheading a weeklong teacher strike in 2012 while serving as president of the Chicago Teachers Union (CTU), died on Sunday, February 7, after a battle with brain cancer. She was 67 years old.

Lewis’s death came amid negotiations between the CTU and Chicago Public Schools (CPS) over the reopening of the city’s classrooms for in-person learning.

A child of CPS teachers, Lewis grew up on the South Side of Chicago and attended Kenwood High School in the late 1960s. While at Kenwood, she boycotted school for several Mondays, demanding more Black teachers and administrators in the school, the incorporation of Black history into the curriculum, and better facilities at Chicago’s predominantly Black schools.

After her junior year, Lewis left Kenwood to attend Mount Holyoke College. She transferred to Dartmouth College in 1972 and graduated in 1974 as the only Black woman in her class. Lewis lived in Oklahoma and Barbados before returning to Illinois to attend medical school. Feeling unfulfilled, Lewis left medical school in 1987 and took up a substitute teaching position at Sullivan High School in Chicago’s Rogers Park neighborhood.

Although Lewis did not intend to pursue a career in education when she started at Sullivan, she grew to love her job. Lewis taught for two more decades at Lane Tech College Prep High School and at King College Prep, where she took on a more active role within the CTU.

In 2008, Lewis became co-chair of the newly formed Caucus of Rank-and-File Educators (CORE), a group of Chicago teachers and education activists fighting school closures. She served as a spokesperson for CORE, drafted its constitution and bylaws, and chaired meetings with community groups.

Lewis was elected CTU president in 2010, a position she held until her retirement in 2018. While the previous leadership group, United Progressive Caucus, capitulated to corporate forces and the Chicago Board of Education, Lewis and CORE returned to the aggressive campaigning in which the CTU had engaged under Jacqueline Vaughn’s leadership two decades prior.

In the first year of Lewis’s tenure, Chicago mayor Rahm Emanuel passed Illinois Senate Bill 7, which required the CTU to receive approval from at least 75 percent of CTU members in order to authorize a strike. Lewis’s impassioned speeches at CTU rallies prompted almost 90 percent of teachers to vote in favor of a strike in June 2012.

In September of the same year, more than 25,000 CPS teachers joined Lewis on the picket lines for Chicago’s first teacher strike in 25 years. Their efforts resulted in pay raises for district teachers and the rehiring of veteran teachers who had been laid off due to school closings. The success of the strike also sparked Red for Ed, a nationwide movement wherein teachers went on strike for better working conditions and higher pay.

At a University of Chicago event in February 2013, Lewis emphasized her support for UChicago’s educational model. “I truly believe in a liberal arts education, and I know how important it is in making your life special,” she said.

But Lewis did not see the same benefit to privately operated, publicly funded charter schools, including the UChicago Charter School (UCCS), which comprises three campuses on the South Side. In an interview with The Maroon in 2013, Lewis claimed that schools like UCCS “aren’t all that necessary” when public education is properly supported.

Lewis considered a mayoral run in 2014 in an attempt to unseat Emanuel, with whom she frequently sparred in public, but opted against it after receiving her cancer diagnosis later that year.

The CTU released a statement following Lewis’s death, calling her “a rose that grew out of South Side Chicago concrete.”