Cyberpunk 2077: A Great Game Hiding Underneath a Buggy, Unpolished, Broken One 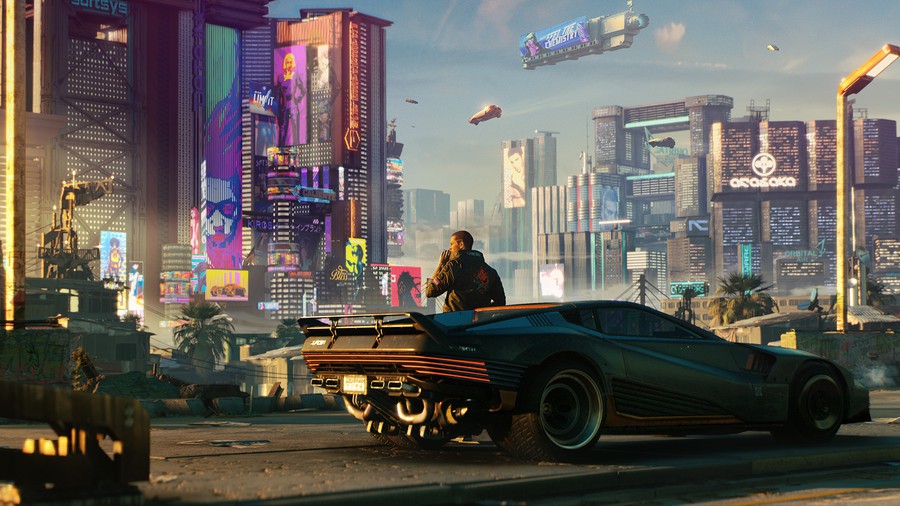 Cyberpunk 2077 falls short of its lofty expectations, stumbling over various bugs and blemishes.

Ever since its announcement in 2012, Cyberpunk 2077 has been possibly the most hyped game of the decade. For eight years, parent company CD Projekt Red has been hyping up Cyberpunk 2077 as the next great open-world masterpiece, causing gamers and fans of CD Projekt Red like myself to not only be incredibly excited for the game, but to also have absurdly high expectations for it. Jump to the game’s release on December 10, 2020, when, rather than the open-world masterpiece many of us expected, we received a buggy, unpolished, unfinished, broken-ass mess of a game that looked like it was developed by Bethesda or Ubisoft.

The game’s release was such a disappointment that when millions of gamers expressed their frustration online, CD Projekt Red announced that they would provide a refund for anyone who wanted one. Sony executives took it even further by announcing that they would also pull the game out of the PlayStation Store until it was further developed. CD Projekt Red has tried to improve the game’s condition with bug fixes and the like, so I’ll be basing this review off of its current condition after the 1.1 patch.

Cyberpunk 2077 follows a young outlaw/mercenary named V, who dreams of becoming the next legend of Night City, a dystopian, futuristic metropolis in the year 2077. V desires to become a rich and powerful figure within Night City’s criminal underworld, and with the help of best friend Jackie Welles, big-time fixer Dexter DeShawn, and ambitious Mox gang member Evelyn Parker, V will earn their shot by participating in a heist to steal “the key to immortality.” However, when things go awry, V will be forced to team up with the ghost of Johnny Silverhand, a punk rocker-turned-terrorist obsessed with smoking cigarettes and taking down Arasaka, the large Japanese corporation that rules Night City with an iron fist. Before I get into the actual game, let’s make one thing clear: despite Cyberpunk 2077’s latest update, its bugs and framerate issues are still a huge problem. Not only do they disrupt the immersion and flow of the game, but if you play the game on console, they can flat out ruin the experience, with the framerate dipping below 20 FPS every time something substantial happens.

I played the game on a PlayStation 4 Pro, and while the game runs better on this console, it nonetheless suffers the same issues that a base PS4 would have. If Red Dead Redemption II, God of War, and The Last of Us Part II, all of which are some of the best-looking games I have ever played, can run smoothly on a base PS4 console, then Cyberpunk 2077 should not be any different, no matter how ambitious it might be. Until CD Projekt Red fixes the issue, I recommend playing Cyberpunk 2077 on either the current-gen consoles (PS5 and Xbox Series X) or on a high-end PC. You will still run into several bugs, glitches, and dips in framerate, but it will at least be bearable.

In terms of the game itself, things are certainly mixed. My biggest issue with Cyberpunk 2077 is that for an RPG, a genre whose main appeal is player-unique stories, wherein each choice affects the game’s outcome, it feels strangely restricted and linear. The reason why RPG games like Fallout: New Vegas and Skyrim have such a dedicated fanbase is because you have the freedom to do whatever you want and go wherever you want, with each choice ultimately leading to a different consequence. While all of this is technically in Cyberpunk 2077, it does not feel fleshed out enough to feel like a story I crafted myself. Its modifications, including dong length for those who chose to play as a male V, are entirely surface-level.

For example, in the beginning of the game, the gameplay makes you pick a lifepath (Nomad, Street Kid, or Corpo), but no matter which option you pick, the game’s story literally plays out the exact same. Technically, each path begins the story with V at different places in different positions. If you pick Nomad, you start with fixing your car before entering Night City; Street Kid starts in a bar belonging to a gang called the Valentinos; and Corpo starts as an agent working at Arasaka tower. However, the introduction always ends with a montage of you and Jackie becoming best friends and low-level gangsters.

Ultimately, with the exception of an additional dialogue option, there is literally no difference between playing as a Corpo, Street Kid, or Nomad. Even some of the more creative missions always ended the same way, no matter what option I chose. For example, during a mission where Jackie and V had to negotiate a business deal with a cybernetic gang called Maelstrom, I had the option to either negotiate with the gang peacefully, or shoot the gang’s boss and get what I came for with force. Regardless of the option I chose, it always ended the same way: getting out of the Maelstrom base by shooting my way out. During the promotion of the game, CD Projekt Red always talked about how players’ choices had consequences and that there were branching story paths, but rather than getting actual freedom, I only got the illusion of it.

While the lack of freedom and the bugs/framerate dips were my biggest issues with the game, another of Cyberpunk 2077’s flaws was its combat mechanics. On the one hand, I thought the game’s shooting mechanics felt incredibly refined. Not only was it fun to blast away my enemies with the powerful guns I either collected or crafted, but every gun also felt unique in some way, including a pistol that shot flaming bullets, a rifle that scatter-shot electric bullets, and a quippy heat-seeking pistol named Skippy. Unfortunately, I did not have the same love for the hand-to-hand combat, which is incredibly weird to say considering that The Witcher 3’s (also by CD Projekt Red) entire combat was based around sword fights. While at times fun, the hand-to-hand combat ultimately felt clunky and awkward, making the game significantly harder when trying to fight against people with weapons. It felt so broken that I was fundamentally discouraged from using melee weapons unless I was forced to, instead relying on guns.

Another aspect about the game I had mixed feelings about was the side missions. Throughout Cyberpunk 2077, I encountered two kinds of side missions: interesting, character-driven activities that either flesh out V’s relationship with a character or add to the worldbuilding of Night City; and stupid, repetitive bullshit, where every mission involves V having to go into a building to kill a group of people, rescue a hostage, steal/hack something, or a combination of the three. Unfortunately, the game makes no distinction between these types of side missions, so every time I mark a side mission on the map and travel to it, I must pray that I get one of the more interesting, character-driven side missions. The reason I feel so frustrated with how the side missions are laid out is because buried underneath the repetitive missions are genuinely interesting and fun side quests that add extra layers to the game’s story. Whether it’s the side mission in which I got to talk to a funny sentient soda machine named Brendan, the mission where I learned the backstory and mental state of a character named Judy by scuba diving into a flooded city, or the quest where I blew up a bunch of enemies with a tank and then had sex with a character named Panam within said tank (optional), there is always something unique and engaging. Unfortunately, they share the spotlight with repetitive, boring, Ubisoft-tier side content.

However, without a doubt, the best and strongest aspect of Cyberpunk 2077 is the story. Without spoiling anything, Cyberpunk 2077 deals with themes of mortality, freedom, and individuality; these themes are developed through V’s desire/motivation to become a legend in Night City and their relationship with all the side characters like Johnny Silverhand, Jackie Welles, and whomever V chooses to romance. While there are technically five different endings in Cyberpunk 2077, I felt like all of them not only felt in-character, but also contributed to these themes of mortality and individuality. Besides V, the rest of the game’s characters also felt like real people I could emotionally connect with, my favorite side character being Johnny Silverhand. I have not felt this way about video game NPCs since Red Dead Redemption II, and I have to credit both the actors who played these characters and the excellent writing team for creating such human, emotionally resonant characters.

I love the story, the characters, and the setting of Cyberpunk 2077 so much that I can’t help but be pissed off at the game because beneath all the bugs, crashes, and other technical bullshit is a great game struggling to get out and spread its wings. While I don’t necessarily think this game is on par with some of my favorite open-world masterpieces like Grand Theft Auto V, Red Dead Redemption II, or CD Projekt Red’s The Witcher 3, this game is still so much fun. Really, the only thing holding Cyberpunk 2077 back is all its technical bullshit. I just wished that CD Projekt Red would have just let this game sit in the oven a little while longer because until everything gets fixed and patched up, Cyberpunk 2077 will not be able to live up to its fullest potential. My score for this game will most likely change as CD Projekt Red provides new updates, but until then, Cyberpunk 2077 receives a 7/10.