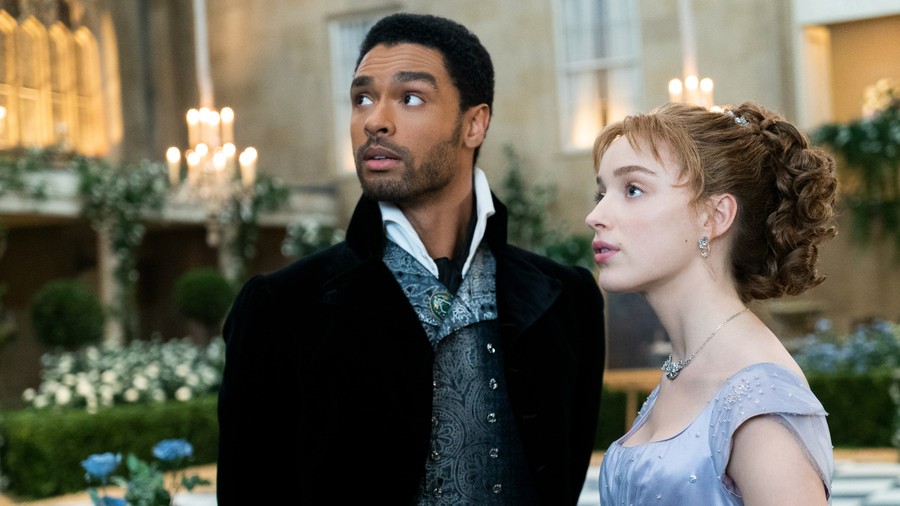 As you would expect from any #fake dating AU, "Bridgerton" becomes a #slow burn, #enemies-to-lovers fanfic.

Everyone and their mother has heard of Bridgerton; it’s inspired countless TikToks, been debated and gushed over endlessly on Twitter, and been splashed across Netflix’s home screen for the past few months. Consisting of just eight hour-long episodes, it’s an easy show to binge. What more, the streaming service says that Bridgerton has been its biggest show ever, making Netflix’s top 10 in almost every country and hitting number one in 83 of them.

To be honest, I wasn’t planning on watching it—like any show involving the British aristocracy, it reminded me too much of Downton Abbey, which I found inexplicably dull. However, I soon learned that Bridgerton was a Shonda Rhimes show, and I was sold; Shondaland has previously graced us with Grey’s Anatomy, Scandal, and more, and there’s no reason to assume that they wouldn’t do an equally phenomenal job with this show––right?

Bridgerton is a British period(ish) show, adapted by Chris Van Dusen from Julia Quinn’s novels of the same title. What is it about, you ask? A steamy journey of a beautiful, soon-to-be-married girl’s realization that she doesn’t know what sex is. Nope, I’m not kidding; the show’s take-away message is that the rich mothers of Regency Britain were not good at having the birds-and-bees talk with their daughters. The plot is particularly simple: all is luscious gardens, beautiful ball gowns, and the anonymous Lady Whistledown’s scandalous newspapers.

Marriage season is upon high society and every family with an age-eligible daughter is in hot pursuit of a suitable husband for her. Daphne Bridgerton (Phoebe Dynevor) is the oldest daughter of the prestigious Bridgertons and is making her debut into society. Long story short, she meets Simon Bassett (Regé-Jean Page), the Duke of Hastings. They don’t particularly like each other at first, but then decide that he will pretend to court her until she finds her match. Simon is determined to never get married or have children, owing to an oath he swore to his father on his deathbed; considering that Daphne’s greatest wish is to become a mother and have a family, how ever will the story proceed?

To summarize, you have family drama, a pair who aren’t in love, and societal expectations. As you would expect from any #fake dating AU, Bridgerton becomes a #slow burn, #enemies-to-lovers fanfic. (There is, in fact, a very precise slow-burn scene of a glove being taken off. Austenians rejoice!)

Precisely because of its unoriginal plot, Bridgerton is an easy watch. It perfectly intertwines the showy, luxe Regency aesthetic with a more intimate romance, and the cinematography is a visual pleasure. The people are beautiful, the setting is gorgeous, and the anachronistic soundtrack––Ariana Grande’s “Thank U, Next” and Billie Eilish’s “Bad Guy” on a string quartet, anybody?––adds a lovely modern touch. Additionally, every episode has (at least) one steamy, sex scene. This makes it a brilliantly binge worthy show, just NSFW with family. Bridgerton has received some brutal criticism, but I personally quite enjoyed it; you can write this off as my desire to do anything other than look at my ever-growing pile of work, or you can consider that Bridgerton is pure entertainment––and should be taken at just that value.

Commendation should also be given to the show for its color-inclusive casting. Instead of solely featuring Black people as the lower class, Bridgerton embraces the idea that Queen Charlotte (Golda Rosheuvel) was Black. As legend goes, her marriage to King George III led to the liberation and integration of Black people into British society.

Unfortunately, the show’s themes about love, marriage, and class consequently aren’t quite as progressive as they appear to be. No further detail is provided to support this saccharine, love-trumps-all backstory of Black emancipation. Racial identity is discussed once between two Black people, and never again; ultimately, Bridgerton uses racism as a minor plot point to make itself ~liberal~ for a hot second, adding to the long list of shows that awkwardly flutter between color-inclusivity and color-blindness. Daphne herself is the picture of the stereotypical idea of feminine perfection: She is white, pretty, petite, mild but appropriately sassy, and an aspiring mother.

A little bit of nuance into the dream-like picture of Regency Britain is added with the introduction of Henry Granville (Julian Ovendon), a libertine, gay artist. While there appear to be hints of chemistry between him and Benedict Bridgerton (Luke Thompson), nothing comes out of it. Really, nothing comes out of that minor subplot, save a brief-yet-moving monologue about Granville’s struggles. Where Bridgerton peaks in its social controversy is with sex (which there is arguably a bit too much of). The show features a scene of consequence-free sexual assault, which relies solely on sexual ignorance.

When Daphne marries Simon and they have tons of steamy sex, she is under the impression that he cannot have children; however, the audience knows that he doesn’t want children. This is where it gets very, ahem, intimate: every time they do their business, he never finishes inside her––something she thinks is normal, because her mother never told her otherwise. Ultimately, Daphne has to ask her handmaid to tell her exactly how sex works, and how babies are made––again, something her mother never mentioned. In an effort to trick him into having children, Daphne sexually manipulates Simon into finishing inside her: Simon asks her to wait before he finishes, realizing what she’s doing, and she does not.

The show subtly implies how sex-ed failed Regency-era women––as it continues to do even 200 years later––but this does not excuse Daphne’s behavior. Were the roles reversed, I do not believe that an audience would root for a husband who took advantage of his wife like this.

Bridgerton raises some important questions about marriage: what do we marry for? For the sake of a family legacy? For love? For making children? And for women, what is marriage? Does it create a new identity, or merely dilute an old one? Is it a duty, a social identity, a requirement for survival, or an independent choice? Regency-era unmarried women were shunned, but the show’s most interesting characters are single and not looking to mingle. However, Bridgerton doesn’t answer––or even directly address, for that matter––any of these questions.

Still, Bridgerton is supposed to be a simple, steamy show; as one review by Roxana Hadadi on Roger-Ebert.com put it, “Bridgerton is most interested in maintaining a specific heterosexual woman’s fantasy, and will shuffle past legitimate concerns raised by its very narrative to maintain that dream.” And better yet, it follows through with that fantasy: tied up in a bow, Bridgerton delivers the perfect happily-ever-after, hastily soothing the angst it takes all eight episodes creating.

Bridgerton is undoubtedly a fun watch and a great escape if you’re looking for something to distract you from your upcoming assignments. With its fabulous costuming and set design, I guarantee that it will transport you––visually, aesthetically, and romantically. But it’s simply that: an escape, one not to be taken seriously at all.