From Stage to Screen: "One Night in Miami" Dazzles in Regina King's Film Adaptation 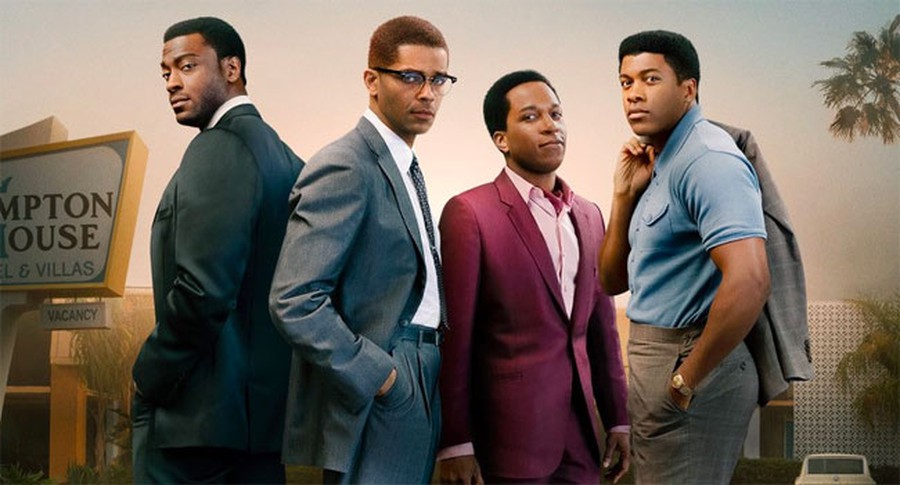 On February 25, 1964, the world was introduced to a new champion. Cassius Clay, later known as Muhammad Ali, knocked out Sonny Liston. It was a shocking upset—Liston was favored 8–1 by oddsmakers—that the ascendant Clay had predicted when he claimed that he would “float like a butterfly, sting like a bee.” Yet the dramatic fight barely registers as a footnote in Regina King’s crackling debut One Night in Miami. Instead, King turns her eye and camera to the real-life, post-match meeting of friends and icons Clay, Malcolm X, Sam Cooke, and Jim Brown at the Hampton House Motel.

Adapted from Kemp Powers’s stage play of the same name, the film represents a fictionalized and earnest discussion of fame, activism, obligations to self and to community, and Black celebrity. A lesser film would have been weighed down by these themes, but Powers (as screenwriter) and King deftly emphasize the familiarity and humanity of the quartet. The men depicted here are icons, but they are also Black, forced to navigate political and personal crises of their time and of their own making.

Critically, King allows her characters to breathe, to live, and to act as human beings do, resisting the urge to further mythologize them. The actors step up to this task, delivering memorable performances. In his depiction of Cassius Clay, Eli Goree balances the physical grace of the boxer with his blustery immaturity and the nascent moral certitude that would come to define much of Clay’s legacy. Aldis Hodge’s Jim Brown shows that, despite possessing the swagger of a star running back, he is impervious neither to pride nor temptation. Both men offer much-needed levity and groundedness throughout the film.

The performances most likely to grab headlines and awards season buzz come from Leslie Odom Jr. as Sam Cooke and Kingsley Ben-Adir as Malcolm X. The men are obvious temperamental foils to each other and form the film’s dramatic core. Each caught at a personal and professional crossroads, their conflict is woven with the intimacies and resentments typical of long-time friends.

At the height of his career, Cooke has found success in courting white audiences and bristles at the notion that his commercial stardom isn’t a means to help the Black community. Odom Jr. captures the natural charisma and insecurities of a Black man who has earned the applause—but not acceptance—of his audience. The scenes in which Odom performs are powerhouses, nearly shaking the screen and stealing the show.

On the other end sits Malcolm X, facing a growing schism between him and the leadership of the Nation of Islam that would eventually prove insurmountable. Ben-Adir laces his performance as the famous orator with the intelligence and anxiety that made him a lightning rod of political activism and controversy. His convictions are simultaneously controversial and inviting, self-righteous and well-founded.

Both men were eventually murdered within a year of the night in question in circumstances that still invite speculation and questions. While King resists the temptation of melodramatic foreshadowing, their eventual fates undoubtedly color and amplify the significance of their interactions.

A singular talent on-screen, King demonstrates that her formidable talents extend to the director’s seat. She trusts in Powers’s excellent script, and the dialogue leaps off the page. She understands that the talk is the action, and her directorial style increases the dynamism, volatility, and stakes of the night. Neither the men nor the audience know where the night could go; we are just thrilled to be on the ride.

It is not an entirely flawless film, although it approaches that designation. There are the occasional missteps in pacing during the latter half, and it glosses over the women who surrounded and supported these men. Whatever film King helms next, here’s hoping she tackles Black femininity—a rich topic that has seldom, if ever, found a home in Hollywood. Yet these are minor quibbles with an all-around excellent film.

Streaming now on Amazon Prime, there could be perhaps no better time for a film of this magnitude and theme. One Night in Miami doesn’t end with any artificial resolution—a wise choice because these are conversations we are still having. All four of these men lived complicated lives and left complicated legacies. We are still members of a nation that wrestles with historical and contemporary racism. There are no easy answers in real life, and the film doesn’t sacrifice its honesty or complexity for any either. Rare in film, One Night in Miami is just as enjoyable to think about as it is to watch.