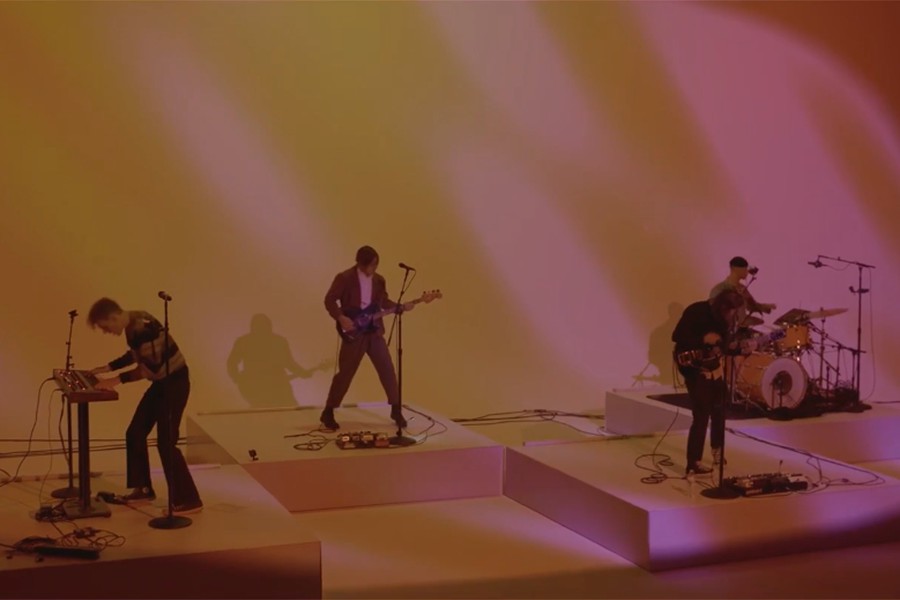 I’ll be honest—I’ve been avoiding virtual concerts. After going to a concert for the first time at age 12, I’ve never stopped attending them in person. I spent my high school years doing my homework days in advance or risking the odd assignment or test just to spend a night watching indie artists in a packed local venue, surrounded by an energetic crowd, bass rattling my ribcage. While the concept of a virtual concert appealed to me at first, it felt like something that couldn’t come even close to emulating the experience that I had come to love so much. So, for a few months, I ignored any mention of a virtual concert, even for artists I enjoyed or hadn’t had a chance to see live. It wasn’t until COIN announced their own virtual concert that I finally caved and decided to bite the bullet.

2020 was supposed to be COIN’s year. In February, they released their third studio album, Dreamland, which was meant to be followed by the Dreamland Tour, a sprawling cross-country tour composed of the band’s biggest headlining shows at venues that they could only have dreamt of performing at. They managed to squeeze in a few shows before the cancellations swept in, which effectively ended the tour before it could ever really get off the ground. Despite their initial dismay, the band bounced back with the release of the Indigo Violet EP, the first of a series of EPs, in October. Then, on November 20, COIN performed their first virtual concert.

The unconventional nature of a virtual concert begins not with the concert itself, but with its preparation. Usually, my concert prep involves a wardrobe change, lots of water (I usually give my throat a run for its money at concerts), and a jam session on the way to the venue. On this particular Friday, I instead completed my genetics lab, assumed the most comfortable viewing position possible, and connected my laptop to my TV for an optimal viewing experience.

The concert started with a reflection video of sorts. Footage of COIN’s first tour in 2015 juxtaposed footage of the band contemplating their 2020 tour’s possible cancellation as they traveled from concert venue to concert venue last February. It was chilling to see the band at its beginnings, celebrating streams on a song, only to be followed by the members discussing their grim prospects on a tour bus, the uncertainty of which concert might be their last—an unspoken, yet palpable, concern between them. It was yet another reminder of just how much has changed in so many ways and in so little time.

Despite the concert’s somber beginnings, the familiar feeling of giddy anticipation crept in as the video ended and the concert truly began. The camera came up on a shot of four platforms, one for each band member. Crew members walked around the set, putting finishing touches on instruments and stage components as the band’s overture-like track “Dreamland Sequence” played overhead. The lights then switched off, with the band making its way to the platforms using flashlights. As the last lyrics of “Dreamland Sequence” faded out, lead singer Chase Lawrence welcomed fans with a simple greeting: “Hello from your TV; we’re COIN.”

While a virtual concert has its pitfalls, COIN created a show with a minimalistic yet highly engaging set design out of the new medium, its efficacy enhanced by the high quality of the cinematography. The band took advantage of the space in every way possible, spreading out and combining the platforms in a variety of patterns. They also made sure to utilize multiple angles, from stage-wide shots to focused angles of the band members’ faces, using GoPros attached to mic stands. While every aspect of the show bore the meticulous attention and detail given to it, the light design was what truly made the concert unforgettable. It featured a myriad of fixtures, from a moon-like circle that came up behind the band to a disco ball that gave an otherworldly feel to the space. The different colors used in the lighting—from a soft baby blue to an electric teal to a rosy pink—gave an added touch to each song and made the setlist distinct in a way unique to the medium. I was especially moved by the design for one of my favorite songs from Dreamland, “Babe Ruth.” The band opted for a black and white filter while old footage of the track’s namesake baseball star played behind the members. Given the song’s dreamy sound, the pared-down design took center stage, giving an added emphasis to the rawness of the music. Mesmerized by the visuals, I found that my awe at what the band had accomplished overtook the doubt I had harbored coming into the concert.

Despite the inevitably odd feeling inherent in performing to an empty room, the band members seemed to appreciate the opportunity to connect with fans after such a long time away. Lawrence, usually the most energetic of the group, jumps and dances his way through live performances without ever missing a beat. Here, he was more contemplative and drawn into the music, though he didn’t miss an opportunity to inject his usual charm into the performance, bringing in a mini trampoline on which to bounce around during one of their newer tracks, “Sort It Out.” Guitarist Joe Memmel was more immersed in the music as well, grinding out complicated guitar riffs and stylizing his usual playing where possible, in addition to providing beautiful harmonies and backing vocals. Drummer Ryan Winnen also gave an energetic performance akin to his usual playing on tour. Touring bassist Matt Martin, a recent addition to COIN, is slightly more on the reserved side as a performer, but he seemed attuned to the group and its music in a way I hadn’t seen the last time I saw the band live. While this performance was mellower than previous concerts, I didn’t find that it detracted from the experience; seeing the passion these artists had for their craft and their gratitude for the opportunity to perform and share this concert with us made the experience all the more special.
Ultimately, whether a virtual concert can live up to or even surpass a live concert is a question that I don’t believe necessarily has an answer. While a live chat in which fans typed “WOOO” at the end of every song doesn’t necessarily equate to screaming alongside fellow concertgoers, the central ingredient that makes these experiences so special is still there: community. For one moment, both artists and fans were able to experience the magic of live music and relive it together, albeit through a screen. Though it looks like we may still be months away from in-person concerts, in its absence virtual concerts have proven worthy alternatives capable of engaging their watchers while pushing the artists’ creative limits, resulting in a unique experience that manages to distract us from the times we’re living in despite being wholly a product of them. In the words of Lawrence, “This is weird…but nice.”