"WandaVision" Review: I Think I Know Where It’s Going, I Hope I Don’t 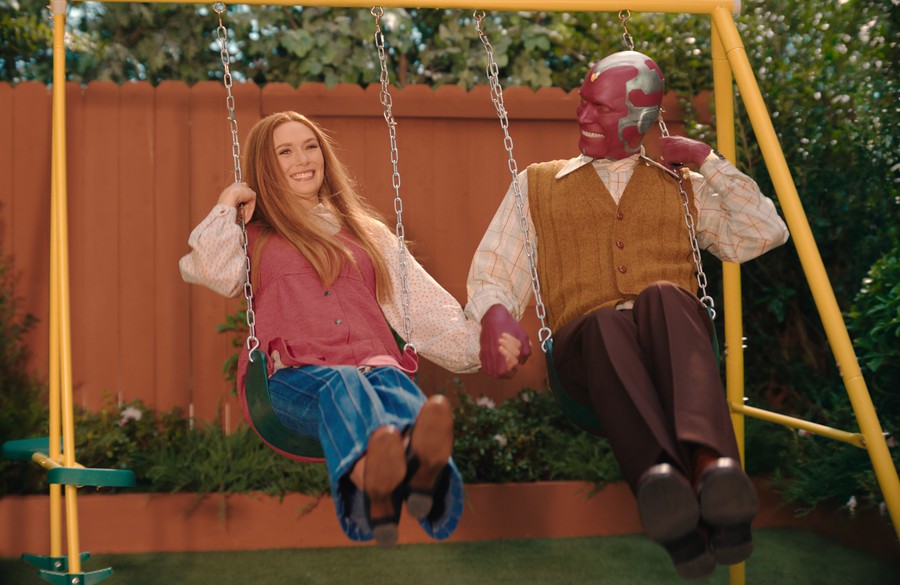 The following review is spoiler-free.

I’ll confess I got my hopes up. The trailers for WandaVision seemed to promise that Marvel Studios’ debut TV series would break the mold in a way none of the studio’s 23 feature films have been able—or perhaps allowed—to do. While the first three episodes promise a fun enough show, that potential for originality has yet to be fulfilled.

Superheroes Wanda Maximoff (Elizabeth Olsen) and her husband, Vision (Paul Bettany), no longer reside in the world that the Avengers spent so many movies trying to save. Instead, they…well, it’s complicated. WandaVision is a sitcom, broadly speaking. Living in the idyllically generic Westview, the happy couple laugh and chatter, have oddball neighbors (including show-stealer Agnes (Kathryn Hahn)), host Vision’s boss and his wife for dinner, and generally do everything that happy couples in sitcoms do. But there is something off in the whole equation, with flickering moments of strangeness mixed in. Aspect ratios shift, pregnancies appear out of nowhere, beekeepers crawl out of sewers—in short, WandaVision gets to be weird in a way no Marvel movie has ever been and thus is intriguing in a way no Marvel movie has ever been.

Before we go much further, I should confess that I’m not a big Marvel fan. I hope that won’t invalidate the rest of this, but that’s your call. I can’t review WandaVision through the eyes of a Marvel Cinematic Universe (MCU) devotee, and there are undoubtedly some details and Easter eggs slipping through the proverbial cracks, but I’ve wanted to watch it since I saw the first trailer. The show intrigued me precisely because it seemed to be offering a meaningful departure from the usual Marvel fare. The great strength of the MCU is also its great flaw—namely, its immense interconnectedness. When individual products have to make sense together, the homogeneity of those products is a natural consequence. WandaVision seemed to be willing to buck that trend, cannibalizing references, eras, and previous MCU content to make something unlike anything else. Three episodes in, with much of the show’s strangeness relegated to the purely aesthetic and with that familiar interconnected homogeneity creeping in, I’m nervous that won’t be the case.

The unfortunate truth is that some of the show’s mysteries don’t remain mysteries very long. After only two episodes, it’s clear that the whole story is heading to a specific temporal point. The stylistic changes between episodes clearly mirror the evolution of sitcoms—the first episode was the ’50s, the second, ’60s, and so on—and I’m certain everything will come to a head when it reaches a contemporary style. I particularly enjoyed the third (’70s) episode, “Now in Color,” and I feel duty-bound to shout out a very Brady Bunch staircase. The individual episodes are themselves pleasant pastiches of their inspirations, but it feels unsatisfying to crack such a simple code. As for the plot of the series, “Now in Color” makes it obvious that all of WandaVision is a government experiment or form of torture or some big old thing I don’t have enough Marvel context to nail right on the head. I can’t foresee an ending in which this isn’t all a grand set-up for whatever movie will pay for Marvel Studios president Kevin Feige’s next home. (This cockiness could really come back to bite me, and I think WandaVision will be a better show if it does.)

Still, even if I know the destination, it seems like the journey will be fun. After the first two episodes invited the audience mostly to analyze their oddities, I was refreshed when the third asked you simply to experience them. If “Now in Color” turns out to be the rule rather than the exception, I’ll be a happy camper. It’s early in the season; there’s plenty of time left for WandaVision’s weirdness to flourish. Maybe my preliminary predictions and criticisms will be right on the money; maybe I’ll be proven wrong and the show will wind up being something wholly original in the Marvel canon. I hope, in the end, it’s the latter.

WandaVision is now streaming on Disney+, with new episodes every Friday. Check this space later for a review of the middle arc of WandaVision.

What is “WandaVision,” If Not MCU-Commercialism Persevering?

Although "WandaVision" has its moments, it ultimately falls well short of being the heralded “visionary new age of television.”