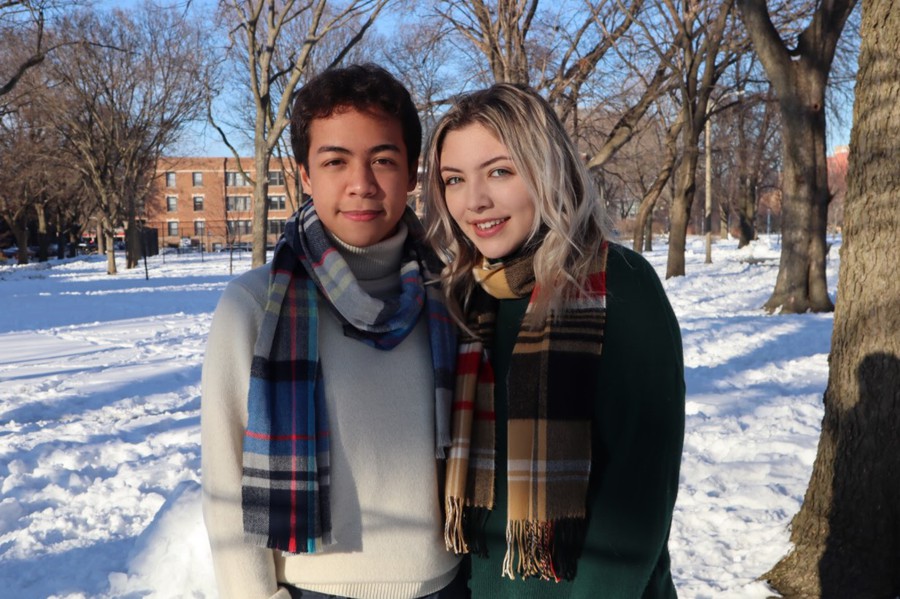 From left to right: Sha Frasier and Daniela Brigatti.

For the past eleven months, campus has been rather…quiet. Music halls and theaters have remained vacant, rehearsal spaces have moved online, and concerts and performances have been postponed indefinitely. Although in-person music has essentially come to a standstill, UChicago musicians and music enthusiasts like second-years Daniela Brigatti and Sha Frasier have found other creative ways to share their passions with the world. Since fall quarter, Brigatti and Frasier have been hard at work planning content, recruiting new writers and members, and seeking RSO status for UChicago’s newest music-focused student publication: Firebird Magazine.

Originally conceptualized by Brigatti, Firebird will feature everything from album and song discussions to features on student musicians and concert reviews. “We saw this gap in the student-run publications…. There’s not really a publication dedicated to solely discussing music news, and reviewing albums and featuring student artists and reviewing concerts when that can happen again,” Frasier told The Maroon. “We wanted to fill that space and with something that does all of those things, while getting at that basic goal of discussing why music is so meaningful and important to us.”

Brigatti added, “We both love music so much. We live and breathe music. To have a platform on campus for people to just talk the way we do by writing articles or reading articles, and to just have that community of people who are as passionate about music as us was just really attractive.”

The name of the publication was in part inspired by this fiery passion for music that Brigatti and Frasier feel so many students on campus have. Paired with the fact that the University’s mascot is a phoenix, and that music—like a phoenix—seems to be born and reborn time and time again, it was enough to convince Brigatti and Frasier that the name “firebird” was a perfect fit.

“The whole symbolism behind this mythical creature is that it dies and is reborn,” Brigatti explained. “I think we often have conversations about how cyclical music is and [how] arts and pop culture can be, and I do think that music is something that’s never going to die. I think there’s something about that [cycle] that kind of transcends time.”

Frasier gave the example of disco music. Immensely popular in the 1970s, the genre has since made a comeback in the music of contemporary artists such as Daft Punk and Dua Lipa.

“There’s something to be said for how popular music is sort of similar to a phoenix,” he added.

Although the details are still in the works, Brigatti and Frasier hope that the first issue of Firebird Magazine will be released online at the beginning of spring quarter, with monthly issues to follow soon thereafter. Given that the magazine is still recruiting new members and waiting for official RSO status and funding, the two co-founders thought it would be best to temporarily stick with the online format but hope to make the most of the situation with a robust social media presence. Online polls, album release news, and frequent posting on both Facebook and Instagram will all be a part of the magazine’s effort to drive up online student engagement while live on-campus music programming remains sidelined by the pandemic.

A musician herself, Brigatti hopes that Firebird will be a way for student musicians and music and art lovers to connect and come together in what is otherwise a very academically focused campus community. The University of Chicago, Brigatti feels, may not be an arts school, but it certainly isn’t lacking in people who are passionate about music.

“Being here is very weird as an artist or an artistic person because we’re not a very artsy school,” Brigatti told The Maroon. “We’re very focused on theory and there’s a big emphasis on STEM…. But at the same time, a big part of my network here and the people I’m friends with are all artists…. There definitely are a lot of ways to get involved with other people in the arts. Yes, [UChicago is less artistic] than other schools, but I think that’s why having an RSO specifically dedicated to music is more important at a place like here than at a place with a bigger music program.”

Though Frasier, on the other hand, is not a musician himself (more of a self-proclaimed “music enthusiast”), he owns more than 160 vinyl records and loves talking about all things musical.

“I think the reason why I had this idea, why immediately it was me and Sha doing this is because Sha is a musical god,” Brigatti said of Frasier. “He doesn’t play instruments or anything, but he knows everything about every song that has ever graced the earth.”

She added, “What’s so cool about this partnership is that I’m a musician and he’s a music consumer, and I think that’s so key to what Firebird is. It’s not just for musicians, or just consumers of music, it’s for everybody. Everyone listens to music. Everyone. And [it’s] such a crucial part of all of our lives, and it’s formative and informative…so anyone should join Firebird—you don’t have to know anything about music, you just have to like it.”

You can learn more about Firebird by following them on Instagram (@firebirdmagazine) and Facebook (Firebird Magazine), or you can email Daniela Brigatti (brigatti@uchicago.edu) or Sha Frasier (shaf@uchicago.edu) with any questions.