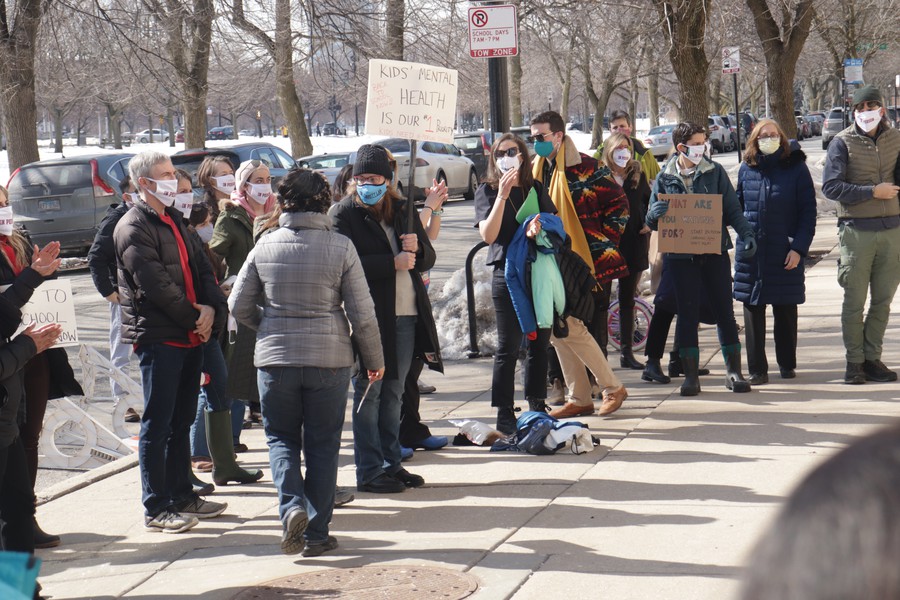 At a demonstration on campus, Lab School parents and students called for school administrators to clearly communicate a plan to resume in-person instruction.

UChicago Laboratory Schools parents and students held a demonstration on Thursday, February 25, at the Lab School’s campus, demanding that school administrators release a plan for the imminent resumption of in-person classes at Lab. The protest was organized in conjunction with the drafting of a petition by “Concerned Parents of Lab,” who expressed their requests in print. At press time, the petition has 562 signatures.

The petition demands that the Lab School return third through fifth graders to full-time in-person instruction by March 1. The petition also calls for more in-person attendance for sixth through 12th graders who have been fully remote for almost a year. Ultimately, the petition calls for all grades to return to full-time, in-person learning by the fall of 2021.

About 50 parents and students gathered outside the Lab School’s Blaine Hall at noon, holding signs with messages such as “Kids First” and “Science Not Fear.” A variety of speakers spoke about students’ deteriorating mental health and focus as the school’s remote learning curriculum approaches its one-year mark. “What started as a public health emergency is turning into a mental health crisis for our children and our teenagers,” one concerned parent said.

“Private and public schools in Chicago have gone back [to in-person learning],” Lab School student Lila Orlov said. “What’s taking you so long?” The Chicago Public Schools system, which has been virtual since last March, plans to return grades K–5 to in-person classes on March 1 and grades 6–8 on March 8. A date has not been established for the return of students in grades 9–12.

“I have been in my room all year, and it feels like my room is just shrinking in on me,” another fifth grader at the demonstration said.

After the protestors gave speeches that cited scientific support for returning students to classrooms, they marched from the Lab School through East 58th Street to Levi Hall on the quad. There, event organizer and UChicago Medicine physician Sarah Hoehn handed a printed copy of their requests to Director of Administration and Operations at the Offices of the President and Provost Maria Romanucci, who was standing outside her office.

Romanucci promised to deliver it to Provost Ka Yee Lee, who oversees all University affiliates in her position. Hoehn urged the University to “open the school for all the grades, for all the children, all of the days.”

Many community members were frustrated by the lack of transparency from the University administration on the Lab School’s return to in-person school. “Who is determining the future of Lab attendance?” asked one parent of a 12th grader and a 10th grader at the school who asked to remain anonymous because she felt her children would be angry that she attended. “We want transparency. We want a seat at the table. These are decisions that profoundly affect our children’s education, their mental health, their ability to thrive, [and] our ability as parents to work.”