"Nomadland": A Gorgeous Trek Through the Wreckage of American Capitalism 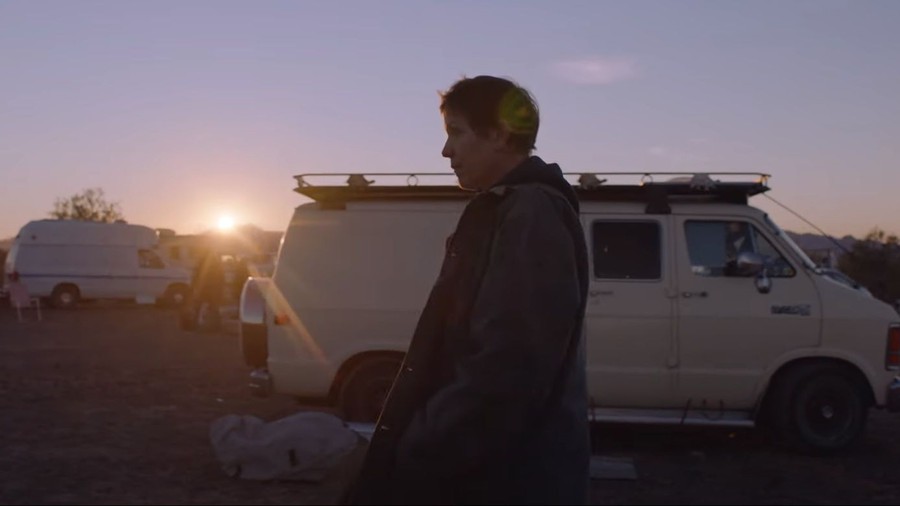 Nomadland's Fern (Frances McDormand) as she lives a year of her life as an American nomad: not "homeless", just "houseless".

In his seminal work Capitalism, Socialism and Democracy, Austrian economist Joseph Schumpeter coined the term “creative destruction” to describe the generative force at the heart of the capitalist system. Capitalism, unlike all previous systems of economic and social organization, is predicated on evolution rather than stasis. The innovative drive that it begets invariably leads to a continuous process of replacing existing institutional structures with new ones. In other words, Schumpeter’s theory of capitalism is one and the same as the old maxim, “out with the old, in with the new.”

But what is being destroyed in this evolutionary process? Who is left behind by this spirit of innovation? In Nomadland, Chloé Zhao serves up a reminder of the human costs of the capitalist system, which is at times harsh, at times beautiful, and at times heartbreaking. Above all, the film is a striking depiction of the people and places that fail to be valued when everything is filtered through the lens of price and profit. Fern (Frances McDormand), a recent widow, has her life upended when the mining firm in Empire, Nevada, at which she has worked for the better part of her adult life, is forced to shut down in the aftermath of the 2008 financial crisis. The demand for sheetrock is gone, and consequently so are Fern’s job and home. She sells off most of her possessions, packs up the remainder in her van (which she names “Vanguard”), and transitions to a life of transience. As she tells an acquaintance she runs into, “I’m not homeless, I’m just houseless”—the road can be as good a home as any.

The film tracks Fern through a year of her life as an American nomad, bookended by the winter holidays during which she takes a seasonal job as an Amazon warehouse worker (the choice of firm being a quite deliberate decision on Zhao’s part). She attends a training camp in the desert run by a famed van dweller on the dos and don’ts of being a nomad—where to find reliable parking at night, how to optimize the use of van space, the intricacies of different buckets that will substitute for indoor plumbing. Hundreds of people attend this camp. The broken and the broke, the adventurous and the helpless, the wounded and the audacious: the nomadic lifestyle does not discriminate. All are welcomed with open arms, without a question asked about your origin or destination.

There isn’t a whole lot that happens during the year with Fern. She moves about without anything resembling a plan, living just about anywhere warm enough for her to sleep in her van at night. She works odd jobs, ranging from line cook to waitress to campground manager to sugar beet processor. Sometimes she gets jarred awake as someone comes knocking at her window, telling her she cannot park there overnight. Sometimes she has car trouble and needs to replace a tire or two. Life goes on for Fern, and along we go with her. The absence of a strong central narrative is a feature rather than a bug of Zhao’s exceptionally naturalistic filmmaking. Not a single element of the film feels forced; every frame tells a story in itself, far beyond whatever seems to happen to Fern at the given moment.

Zhao’s naturalism comes through most impressively in her depiction of the relationships between Fern and her fellow nomads. In Fern’s interactions with the friends she makes at the instructional camp and keeps in touch with throughout the year, one would be forgiven for at times thinking one is watching a documentary rather than a work of fiction. This is no accident; the majority of the cast, aside from McDormand and David Strathairn (who plays another nomad who takes somewhat of a romantic interest in Fern), are actual nomads playing lightly fictionalized versions of themselves. Bob Wells, the famed van dweller who runs the desert training camp, is a real YouTube personality and notable advocate of the nomadic way of life; Swankie and Linda May, two of Fern’s closest friends from her year of transience, are both real-life adopters of Wells’ teachings. This legitimacy shines through in their performances, allowing Zhao to achieve a stunning level of intimacy with these characters for a work of fiction. It feels less like one is watching a film than getting a window into the realities of this mode of living, in all of its exceptional beauty and undeniable difficulty.

The decision to cast real nomads makes McDormand’s work here ever more remarkable. Somehow, she embodies the very same authenticity as the rest of the cast, in spite of the fact that the rest are effectively playing themselves. She plays Fern with a sense of deep loss, coupled with resentment at a system that she bought into fully and which pitilessly spit her out. Yet that resentment does not devolve into complacency or helplessness; instead, McDormand infuses her character with powerful dignity, resolutely dealing with her problems rather than lamenting them. Sometimes you’re going to blow out a tire; sometimes your van is going to break down. Adapt and overcome—such is the ethos of the nomads, an ethos that McDormand’s typically virtuosic performance embodies with care and empathy.

Yet Fern is but one of the protagonists of the film; the other is the natural world that is too often forgotten in the drive to maximize profits and shareholder value. Much of the film consists of breathtaking imagery showcasing the rugged beauty of the American West, from the buttes and pinnacles of the Badlands to the sparse deserts dotted with all kinds of cacti. Many of these vistas are captured at dusk, imbuing the scenery with an ethereality that only the setting sun can achieve.

These images, combined with Fern’s experiences, reveal the radical liberty of the nomadic lifestyle and the kind of radical connection with the natural world that it affords (and, implicitly, that the more conventional modes of contemporary living do not). The brilliance of Zhao’s filmmaking, however, is that she does not force this revelation upon the viewer. There are no Aaron Sorkin-esque monologues railing against the havoc that capitalism has wreaked, and indeed only one brief confrontation where the merits of the system are more forthrightly debated. Nomadland’s power lies in Zhao’s willingness to let the imagery and the characters’ experiences largely speak for themselves.

One of the film’s recurring motifs involves the camera cutting suddenly between extreme closeups of Fern to extreme long shots that isolate her in her gorgeous surroundings, embodying Zhao’s deft balancing act between intimacy and incredible scope in her storytelling. In portraying the travails of a single casualty of the realities of creative destruction, Nomadland tells a much broader story of American capitalism: how it does not serve everyone equally, and how merciless it can be in the way it discards those it leaves behind. And yet, it never loses track of those at the story’s heart: of their ingenuity and resilience, of their fundamental dignity and resolve in the face of adversity. It does not propose prescriptions to the systemic ills it depicts, but through the fundamental decency embodied by the nomad communities simply asks us to remember our common humanity. And in a year where our divisions—political, social, and economic—have been particularly pronounced, perhaps that is exactly what we all need to hear.