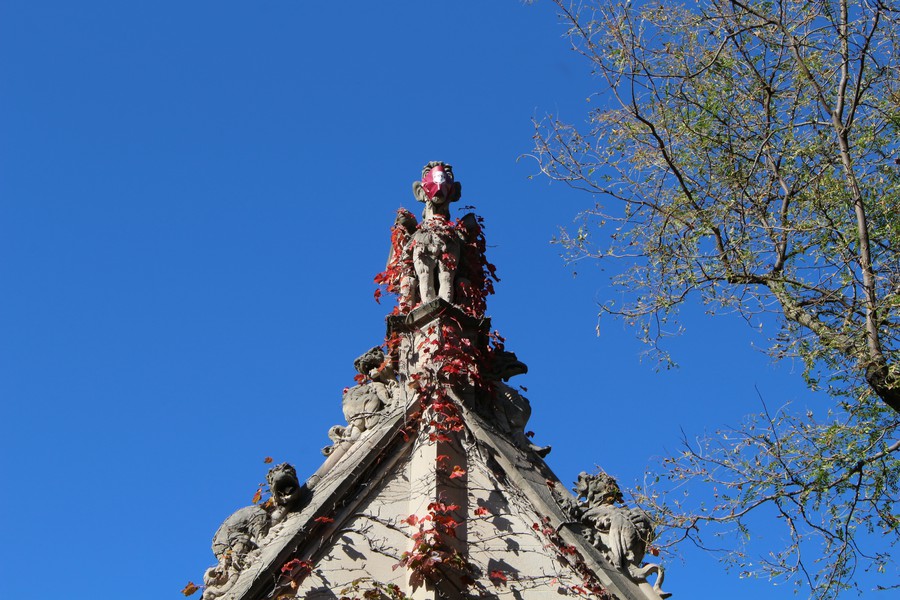 “Mask On”: Gargoyles with UChicago masks, spotted at the Cobb Gate.

With the aim of creating better testing policies to mitigate the next wave of COVID-19 infections, UChicago researchers developed an epidemiological model showing that at least 50 percent of infections during the initial outbreak in New York City were asymptomatic.

During the early stages of the pandemic, health officials often had to make estimates based on the proportion of infected cases that develop symptoms in the initial wave of the pandemic due to the limited data available. “Without testing capacity data, it’s very difficult to estimate the difference between cases that were unreported due to a lack of testing and cases that were actually asymptomatic,” said Ph.D. candidate Rahul Subramanian, a coauthor of the study. “Since New York City was one of the first cities to report the daily number of tests completed, we were able to use those numbers to estimate how many COVID-19 cases were symptomatic.”

This study gives researchers a better understanding of fundamental epidemiological questions such as what fraction of cases are symptomatic, as well as the proportion of asymptomatic cases relative to symptomatic ones. Data regarding asymptomatic carriers of COVID-19 can also provide insight into how the virus would spread in a population in the absence of interventions like asymptomatic testing and early-stage social distancing policies.

This is also the first peer-reviewed model to incorporate data on daily testing capacity and changes in testing rates over time in a large U.S. city, providing a more accurate picture of what proportion of COVID-19 infections are symptomatic.

Information from the model highlights the importance of following public health guidelines to reduce community transmission of the virus, and that controlling transmission requires community-wide interventions informed by extensive, well-documented testing of individuals regardless of whether they are showing symptoms.