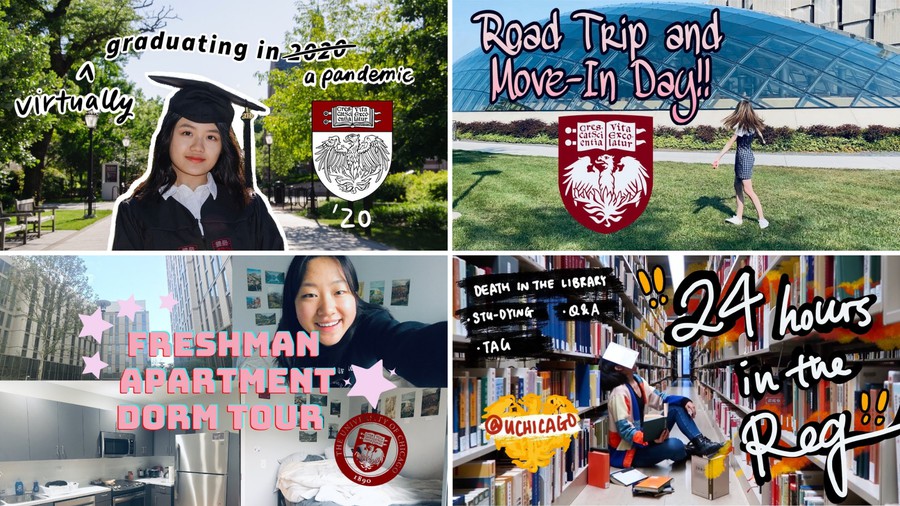 By Ryan Owyang   and Michael McClure

In recent years, before UChicago’s admissions office joined TikTok, prospective students have increasingly turned to online platforms for a look at what life at the University is like. YouTube videos, from casual vlogs of campus dorms to a breakdown of the economics major’s various tracks, have drawn views from among UChicago’s prospective applicants, current students, and graduates.

The Maroon caught up with four student YouTubers who have shared their experiences at UChicago with the online world.

In October 2016, Sissi Zheng (A.B. ’20) posted a short video of her flipping through her calculus notebook on her Instagram. Two months later, she posted her first YouTube video, “Winter Break Haul,” in which she showcased some stationery items she purchased. “In that video I mentioned that I go to UChicago and I got a few [messages] like ‘Oh, you should show us around the school and tell us what it’s like!’” Initially, she didn’t plan on making videos about UChicago, but comments like those made her consider the idea.

Four years later, chocopuffeater has more subscribers than the UChicago Admissions YouTube channel and has become many prospective students’ first glimpse into life at the University. Although Zheng’s intention was not to promote her channel to people interested in UChicago, prospective students nevertheless became a large part of her audience.

“Definitely around second year or third year I [felt] like an unofficial admissions [representative] because a lot of the time, people would come into my DMs [direct messages] and ask me very specific questions, like what courses I took or what books I read or [if I could] post a picture of my syllabus,” Zheng said. “In third year especially, I posted more content about what it’s like, what the classes are like, and what my major was like.”

Besides capturing her and her friends’ daily lives, Zheng also discussed UChicago’s educational philosophy on her channel. “I thought it was important to transmit the type of education offered here and allow people to understand what our aim is.” Even so, the main focus of her videos was her personal experience. “I think people want to watch videos made by actual students and not the admissions office because they want to hear real perspectives of the individuals taking classes.”

Despite an increasing number of views and subscribers, Zheng said that her channel was not about creating eye-catching content. “What makes you pop on YouTube, besides consistency of uploads, is having fresh content that pops off the page and draws a lot of attention for being flashy,” she said. “Whoever’s interested can watch.… I’m a super old-at-heart person. I’m a homebody, I never go out and party, I don’t do anything extreme.”

Despite being a major part of the University's online presence, Zheng didn’t intend to shape general attitudes about UChicago. “I don’t want anyone to think my experience encapsulates everyone else’s experience, and I don’t want people who watch it to feel judged for wanting to pursue something I didn’t want to pursue,” she said. Just like the videos documenting her school journey, career path, and the way she lives, Zheng encouraged her audience to find their own unique path at UChicago and beyond. “I believe that every person’s path is so uniquely theirs.”

When Chloe Tan started her YouTube channel three years ago, it didn’t revolve around UChicago. In the winter of 2018, Tan was accepted to the University of Oxford’s philosophy, politics, and economics program, and she began offering advice and answering questions about her application experience on her channel, itschloetan. “It wasn’t that difficult for me to just start filming myself and start putting it on YouTube,” she said.

Soon after she was accepted to UChicago through Early Decision I, Tan discovered that there wasn’t much UChicago–related content on YouTube, which inspired her to fill the void. “It comes from a place of not wanting other people to go through the uneasiness that we did,” she said.

Tan has covered a broad slice of UChicago life, including study sessions at Regenstein Library,  Model United Nations, and the UChicago application essay prompts, but her goal remains to provide an objective presentation of campus life. “I’ve always tried to portray UChicago in more of an informative way,” she said.

With thousands of views per video and over 13,000 subscribers, Tan has earned a formidable following on YouTube. A video of her moving in to Campus North Residential Commons, which she posted in May 2019, has accrued over 100,000 views, a view count she attributes to the paucity of content about UChicago dormitories. “There’s no tour of North from a student perspective, so I think any dorm tour is already a major clickbait title for college students.”

The length of the move-in video—six minutes and 40 seconds—may also have boosted its popularity. Many YouTubers opt for videos of eight minutes or longer, which allows for more advertisements to be interspersed. “For this video, I didn’t really care [about advertisements]. I just wanted to showcase the dorms. It’s short, it’s informative, and it’s relatively quick-paced,” Tan said.

But bringing college life online has not always been easy for Tan. Last winter, following some personal struggles she endured at UChicago, she posted a video about the mental health challenges of public-facing students like her.

“I didn’t have to put it on YouTube,” Tan said of the video. “It was only up for a day, but it actually did get more views than a usual video because I [talked] about my stressors at UChicago.”

Much of the video centered around her feelings of imposter syndrome and the burnout she felt from her academic work. “I felt like I had to ‘do more’ to have a place there,” she said. “I didn’t want to pose it as ‘UChicago is overbearing,’ because it’s not UChicago’s problem, it’s my own.”

Itschloetan is a carefully curated channel: Tan brainstorms video ideas multiple weeks in advance and spends several hours—sometimes days—editing each video. That now-deleted video, however, was a major departure from her norm. “That video was me speaking in my bedroom with zero editing,” she said. “I still haven’t rewatched it…all my stumbles, all my frustrations, all my lack of words, et cetera, it all showed.”

First-year Makayla MacGregor began uploading videos to YouTube in high school, but after she finished her college applications last year, she found herself with more time to create content. Since coming to UChicago, MacGregor’s videos have included study sessions, college application advice, and footage of move-in day.

“I hope that if prospective students look at my vlogs they’ll be able to…understand what a day in the life of [a UChicago student] looks like,” she said.

But having spent winter quarter at her home in Maine, MacGregor found it difficult to showcase UChicago’s variety of offerings when taking classes online. “It’s definitely a challenge to still produce good content [since] I’m just doing online learning,” she said. “It’s a very limited view of UChicago, I think, but it’s as much as I can show under the circumstances.”

MacGregor’s videos are also dictated in part by the technology she owns. “I usually keep my videos short because I have not yet spent the money on a good camera, so I just use my phone. And I have limited space on my phone, so as soon as I’ve gotten the shot I need, I shut off the camera.”

“Now that chocopuffeater left and Chloe Tan is taking a gap year, a lot of people are like, ‘There’s a gap [in the content],’” said first-year Donna Tong, a Lab Schools graduate and a new face on UChicago’s YouTube scene. “I never thought of myself as a vlogger,” she said. “Everything I’m doing now is based on instinct. I’m not trying to fill the gap that Chloe Tan left—god knows I couldn’t.”

Even with a smaller audience, Tong still receives messages from prospective students looking for advice. “One of my favorite things in the world is when people DM me on Instagram or comment and ask about life [at the school].” As a result, Tong felt some responsibility for how others connect her to the school. “I wouldn’t say that I represent the…University, but when people ask me about it, I do feel like I have a responsibility to convince them, to pull them in.”

But neither does Tong try to sell a false version of her experiences. “When I speak positively of the University, it really does come from my heart,” she said. “I’m stressed, but I’m happy. I know I’m doing what’s right for me.”