"Moxie" Is Big, But It Could Be Bigger 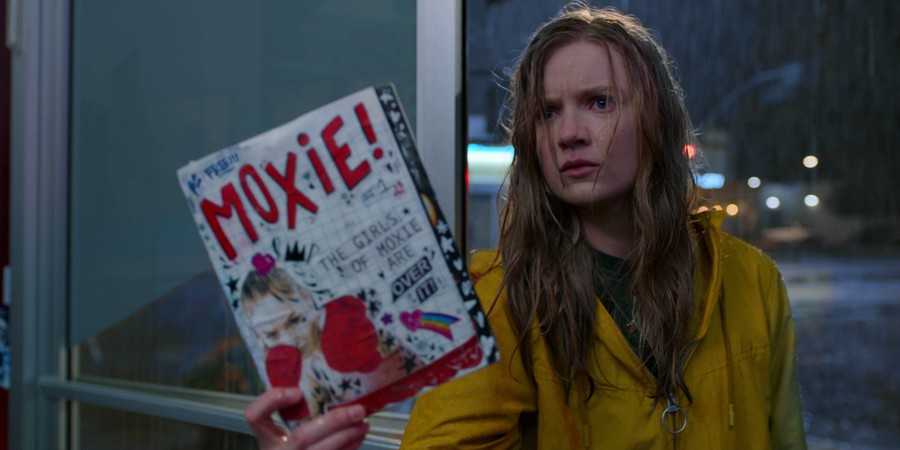 Vivian (Hadley Robinson), the heroine of "Moxie", holds up the titular magazine defiantly. Because she is defiant. And defies the patriarchy.

We’ve all had that dream. Being chased but not being able to run fast enough, wanting to scream but no sound coming out. This is where Moxie, teen coming-of-age movie meets punk-girl-feminist-activism, begins. The movie’s lead, Vivian (Hadley Robinson), is running through the woods, breathing heavily, and hurriedly looking over her shoulder. Finally, she stops in a clearing and desperately tries to scream, but she can’t—her voice has been silenced.

Moxie, Amy Poehler’s new movie now streaming on Netflix, follows Vivian, an initially demure sophomore in high school and her journey to starting a feminist revolution. Every year, at the suburban California public school where the film takes place, the guys on the football team put together an incredibly offensive list ranking the girls in their school: Their categories include “Best Ass,” “Most Bangable,” and “Future MILF” to name a few. Every year, Vivian and the other girls in the school read the list and do nothing about it—but not this year. Fed up with the glaring sexism in her school, and inspired by Lucy (Alycia Pascual-Peña), the outspoken new girl who emanates confidence, Vivian decides to start an anonymous zine to protest the list and the patriarchy it upholds. At first, Vivian timidly distributes Moxie! (the zine) on top of the hand dryer in the girls bathroom; by the end of the movie, and with support from other outspoken students, she’s pasting the zine on school lockers and starting school-wide walkouts. With a few poignant quotes, sharpies, and access to a copy machine, Vivian was able to give women in her high school their voices back.

This movie is, in a lot of ways, like all coming-of-age high school movies: There are cliques, romances, crappy principals, and college apps. There are also notes of humor, which one has to expect in a film directed by comedy legend Amy Poehler. Poehler also stars in the film as Vivian’s mother, whose only care at 16 was to “smash the patriarchy,” another source of inspiration for Vivian’s newfound rebel attitude. While Moxie certainly contains all the tropes of a teenage drama, it has the potential to be something much more. The movie brings to the surface many important issues—sexism, racism, harassment—and places them at the center of its plot. In this way, Moxie is an incredible feat, one that I am sure will make waves in the lives of those who watch it—I myself had the urge to get the colored markers from my own desk drawer and start a revolution. Even so, I still found myself wanting more.

While the movie represented Black, Latinx, trans, disabled communities, etc., it still centered around the life of a middle-class white girl. The other characters and their stories felt secondary in a way that came off as formulaic. The movie did attempt to address Vivian’s limitations during a candid conversation with her Asian best friend Claudia (Lauren Tsai)—“You don’t get it Viv, you don’t know what’s going on with me because you’re white.”—but fails, as it neglects Claudia’s character development in favor of Vivian’s newfound wokeness. I would have also loved to see Lucy’s character developed more. Lucy is arguably the strongest voice of the Moxie movement, and yet we don’t know much about her or her backstory aside from the fact that she moved to Vivian’s town from the Bay Area. In an interview with The Maroon, actress Hadley Robinson agreed, stating that, if given more time on the movie, she would have wanted to see more of Lucy: “She really takes the movement and makes it into something.”

All in all, Moxie delivers a powerful message, one that could be further emphasized through more socially conscious nuances. And if a bunch of middle and high school zines started popping up across the country? Well, I wouldn’t be surprised.