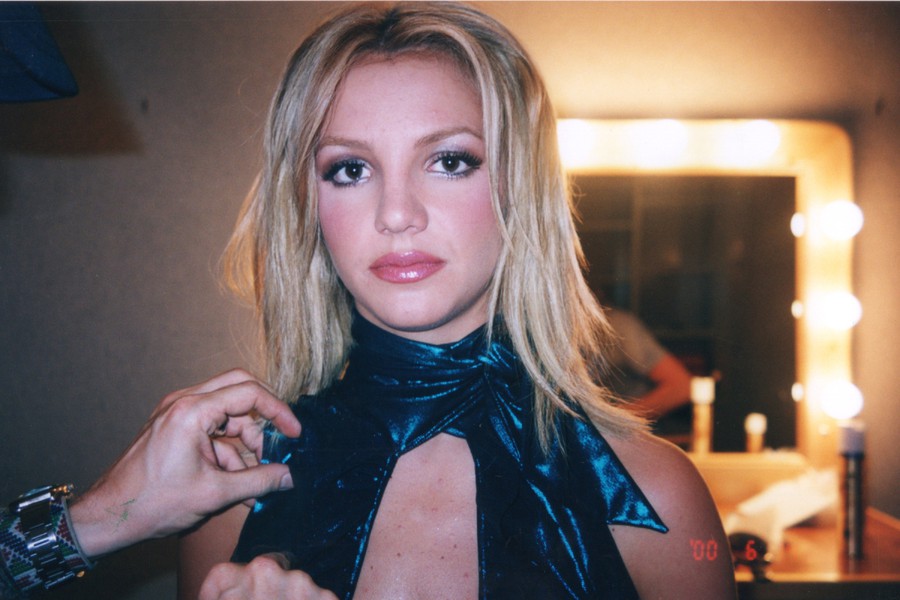 Britney Spears, pictured here in 2000, is the subject of a new documentary by "The New York Times Presents."

On her first Rolling Stone cover in 1999, Britney Spears is lying on her bed in her underwear holding a Teletubby. It’s an image that would create an instant controversy over its portrayal of the then–17-year-old Spears as a Lolita figure of middle-aged men’s dreams. Twelve years later, photographer David LaChapelle recalled the night of the shoot when Spears stripped down to her underwear, much to the shock of her manager, who insisted on knowing what was going on. “She went, ‘Yeah, I don't feel comfortable,’” LaChapelle said. “At first I felt betrayed. But as soon as he walked out, Britney said, ‘Lock the door’ and unbuttoned her shirt wide open.”

It’s an image that encapsulates much of the controversy animating Spears’s career. There is an indelible sense of control—a 17-year-old girl who wanted to take control of her own sexuality—mixed with an element of exploitation that now seems obvious. This question of who is really in control still hovers over Spears’s career, and it is inextricably related to our desire to truly know her. For a figure who has been so relentlessly covered, she is impossibly elusive, constantly hidden behind layers of industry and media projection.

During the height of Spears’s career, she was often thought of as a mindless puppet controlled by the pop machine. In this conception, she had no say over her image; all Spears did was act out decisions made by others. One of the most interesting things about Framing Britney Spears, the new documentary about her, is that it pushes back against this narrative. The documentary, the sixth episode of The New York Times Presents, stresses that Spears did indeed have control during this stage of her career. Decisions about her performances went through her; she came up with the concepts for some of her most iconic music videos; and by her fourth album, 2003’s In the Zone, she had songwriting credits on more than half of her songs. This narrative is appealing in its own way; for one, it grants Spears an autonomy that she has continuously been denied. It also acknowledges how much of her success was not because of some pop machine, but because of her—her own charisma, personality, and creativity.

As the story of the 1999 Rolling Stone cover shows, however, neither of these narratives are completely true. Spears did have far more control over her music, appearance, and performances than she has been given credit for. And Framing Britney Spears is overdue in pointing this out. But just as we should acknowledge the control Spears did have, it’s also important to note what she never really had any control over: her public image as filtered through the media. Spears would later say in 2003 that she felt like she was “tricked” by LaChapelle, that she was 16 [sic] and “didn’t really know what the hell [she] was doing.” In this particular story, Spears’s control, her desire to be more sexy in her image, doesn’t mean that she wanted the Lolita image that the photos presented. She was too young to really understand the implications of the photos, but the adults around her did and took advantage of her naïveté to present her in an objectified manner. This would also result in her being forced into various sexist archetypes—the virgin and the slut—from which she has never really escaped. In this sense, despite the control Spears may have had over her albums, performances, and image, she was still at the mercy of an industry that sought to objectify her for profit and the victim of a misogynistic media that was unable to comprehend her as a complex person.

After years of being stereotyped in the media as an overly controlled blonde sex symbol, Spears would sharply break away from this image in 2007, as epitomized by her infamous head-shaving incident. For once, she seemed to be completely taking control, fully shedding her perfect pop star image. But this would only tilt the narrative against her even more; once again, she was dismissed as crazy and subjected to even more objectifying coverage. In 2007, Spears was relentlessly hounded by the press, with hordes of paparazzi following her every move. Everything she did was news to be documented and sold for profit. But in all of this relentless coverage of her, nobody stopped to ask what Spears herself wanted or thought. Rather, she was and still is less a person to the media than an object of pure consumption, an entertainment commodity whose downfall exists to be consumed by the public.

Thus, to see the story of Britney Spears is to see somebody whose personhood and agency has gradually been stripped away, to see somebody continuously defined by others until finally she became nothing but an object of consumption. The most comprehensive profile of Spears, Rolling Stone’s 2008 cover story “The Tragedy of Britney Spears,” features numerous stories from friends, employees, and managers in an attempt to reconstruct her story from the outside in. But the person at the center, Britney herself, is conspicuously absent; she has been removed from her own narrative. The profile, often presented as the definitive profile on Spears, views Spears less as a person than as a cultural symbol, a mirror through which we can see ourselves. The profile is not kind to Spears, describing her at one point as an “inbred swamp thing.” It projects various character traits onto Spears; that she is entitled, arrogant, and enjoys the paparazzi’s attention. But without the voice of Spears herself, these observations contain nothing but our own conceptions of her. Perhaps it is “definitive” in how it reveals what has always been true: that we don’t really know Britney Spears, and despite how much control she has had over her music and performances, she has never been in control of the narrative surrounding her.

Spears’s conservatorship, instituted in 2008, has made her more unknowable than ever. Under this conservatorship, her father has had total control of her medical care, her finances, who she can and cannot see, and all other aspects of her daily life. Access to Spears is greatly restricted, and Spears has never been able to speak publicly about the conservatorship. Despite the obviously sensational nature of this situation, it has received basically no media attention for more than a decade. Perhaps it’s only natural that a media which for so long viewed Spears as simply an object or cultural symbol wouldn’t care that Spears has been, quite literally, robbed of her fundamental rights as a person. That doesn’t make it any less shocking, though. Both tabloid and mainstream media outlets have continued to report frequently on Spears over the past decade, documenting her new albums, her world tours, her stint as a judge on The X Factor, and her four-year-long residency in Las Vegas. None of these reports give Spears’s conservatorship much more than a brief mention. None of them question how a woman who was capable of all of this in her career could also require a legal guardianship that robbed her of the right to control even the most basic aspects of her life.

Fans of Spears were asking these questions, though, leading them to start the #FreeBritney movement, which seeks to end Spears’s conservatorship. As a result of Framing Britney Spears, the movement has finally gained sustained mainstream attention. The documentary portrays both her dehumanization at the hands of the media as well as the drama around her conservatorship. Perhaps the most radical thing the documentary does is treat Spears like a person. It does this through pulling back and merely presenting the public coverage of her story without presuming to know her. Thus, it’s ultimately more about us than it is about Spears. It's about how we framed her and how this framing led to her losing everything. And hopefully it can remind us that, amid all of the gossip and speculation, Britney Spears is a real person with her own story and her own voice. Much of the media reaction to the documentary has focused on reexamining the dehumanizing media treatment she faced at the height of her career. It’s refreshing to see this being discussed, but it is also disheartening to see so much of this discussion neglect the second half of the documentary, which portrays her current legal dehumanization under her conservatorship. It’s impossible to report on the sexism and dehumanization Spears faced in the media for so long without making the point that this very dehumanization is both what led to her current predicament and what caused us to ignore it for so long.

We all want to know her. Celebrities have often presented a veneer of perfection and authenticity, especially before the social media era. There is a desire to know who they really are beneath this perfect image—to deconstruct this image. But now, under the conservatorship, where she’s controlled completely and prevented from speaking publicly about anything of substance, we know even less about Spears than we did before. Where is the real Britney Spears in this mess of people who have controlled her—in the media who for so long defined her not as a person but as an object or symbol? Will we ever know? We probably don’t deserve to, but Britney does, and she deserves to be regarded as a person and allowed to tell her own story. For once, the media might be able to help her in this if they could finally focus on covering the conservatorship. Briteny Spears has no obligation to tell us her story (if she ever gets that chance), but I can’t help but yearn to finally hear it from her.