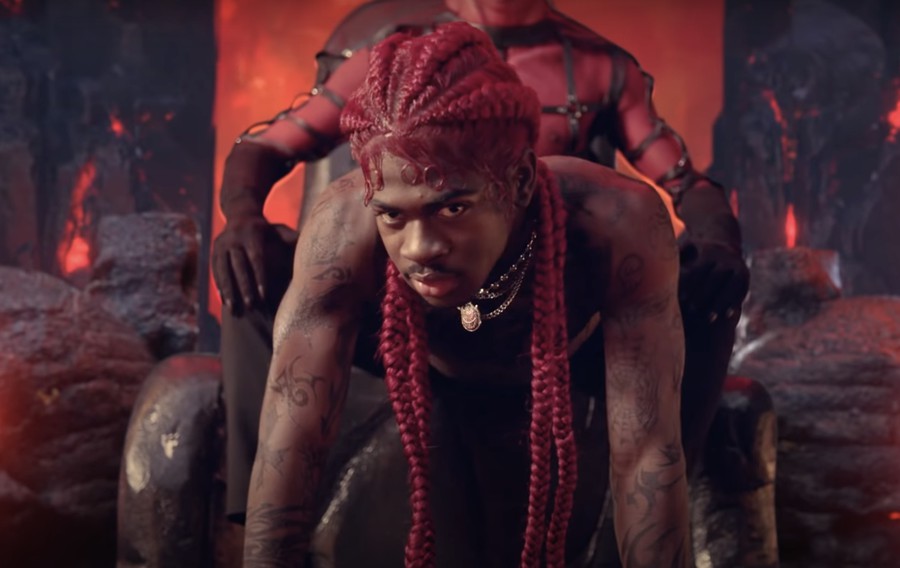 “In life, we hide the parts of ourselves we don’t want the world to see. We lock them away. We tell them, ‘No.’ We banish them. But here, we don’t.” With these lines, directors Tanu Muino and Lil Nas X bring us through a purple-tinted mythical hellscape right to Nas himself, who is sitting at the base of a tree. With a hot pink guitar in hand, he strums a soft, flamenco-style tune. It feels intimate, personal, and then *boom*! The synthesized baseline drops, and all hell breaks loose––literally.

As the saying goes, “Toto, I have a feeling we’re not on the Old Town Road anymore. We must be over the rainbow.” And well, Lil Nas X––born Montero Lamar Hill––would definitely agree. Released March 26, 2021, “Montero (Call Me By Your Name),” follows the same levels of fame as Nas’s previous hit, “Old Town Road” with Billy Ray Cyrus. The title is unusual, confusing even; however, the video is anything *but*.

When you get over the phenomenal drop, you recognize the historic landscape of the video; it is, literally, the beginning of mankind––at least as the Bible sees it. Opening in a pink-and-purple Garden of Eden, Nas plays Adam *and* the snake, who, as the story goes, tempts Adam. Adam gives in to his carnal desire––CGI–Nas kissing CGI–snake-Nas––and as a result, finds himself in the Colosseum on his own execution day. His torturers, jailors, and all the people jeering at him are all, well, him. On trial, shackled to a dais, Adam is stoned to death––not with stones, but with butt plugs.

Sticking with the Biblical themes, Nas then ascends to Heaven, only to be pulled down to the fiery pit of Hell. Fortunately, he takes the shortest route available, riding a stripper pole all the way down. We are then treated to the most controversial scene of the music video: Lil Nas X gives a lap dance to the Devil himself––which, to be fair, is definitely one way to enjoy eternal damnation. Past the erotic CGI–laden visuals, the video ultimately ends on the immensely powerful note of Nas snapping the Devil’s neck, and then wearing his horns. Step aside everyone, Hell’s got a new––very gay––king.

The explicit references to Christianity don’t just end there; the accompanying cover art is a parody of Michelangelo’s Sistine Chapel art, with Nas as both God and man. Now, you can understand why religious fanatics are upset––and trust me, they are. Nas’s Twitter feed is rife with brilliant clapbacks to conservatives shaming him for his video, namely the lap dancing on Satan bit, but also the gay bits––which is, effectively, all of it.

However, it’s this exact shame which the entirety of “Montero” relies on. A two-fold title, “(Call Me By Your Name)” is a reference to the novel by André Aciman and its popular cinematic adaptation of the same name by Luca Guadagnino, starring Armie Hammer and Timothée Chalamet. If you haven’t seen or read it (which I highly recommend; the book is a personal favorite), *Call Me by Your Name* tells the story of a young boy in a secret gay relationship with an older graduate student his family is hosting. After the first time they have sex, the latter says, “Call me by your name and I’ll call you by mine.” This line has been analyzed thoroughly, but it’s a popular reference to the idea that one of the two people in a relationship is closeted. As Nas sings about his own relationship, it’s implied that this closeted man he’s with is not “living right” ––effectively, not living true to himself–– but that it’s okay; that to Nas, it doesn’t matter, because he wants him regardless. On the flip side, however, it’s also an unabashed act of narcissism. Considering that he plays every character in the video, this is perfectly on-brand, a bold exploration of Nas’s own sexuality and self-image.

The video and the song of “Montero” scream, “We’re here, and we’re *very* queer!” No punches are pulled and no *spicy* details are glossed over; “Montero” is unapologetically about queer sex. While I’ll avoid quoting lyrics to keep it PG-13, the lyrics are carnal in ways that are unheard of in even mainstream queer artists’ music; Troye Sivan’s “Bloom” comes close, but no lyric matches the overtly proud sexualism that Nas details.

In an interview with Genius, Nas said, “It’s about time that I say something out of pocket in a song. Let’s normalize having these fucking lines in songs, the same way that, you know, someone might talk about fucking a girl or fucking a guy––with other genders, you know. I feel like that’s very important for representation.” (I, for one, am absolutely here for it.)

In that vein, let’s (metaphorically) deep dive into Hell. After all, “Montero” is more than a steamy bop; as anything about gayness and sex is, it is a religious and political statement. The queerest, most radical thing in the video isn’t that Nas twerks on Satan, but the fact that he rejects the offer to go to Heaven, instead *choosing* to descend to Hell. After all, why should he––or any gay person––want to go to Heaven, when all the supposedly “good” people up there chose to punish him for wanting what he wanted? Power, for Nas, lies not in going to Hell, but in *choosing* to––in taking power into his own hands.

With his Christian upbringing, it makes complete sense that Nas would shame an institution that has historically and continually oppressed the LBGTQ+ community, the most recent addition being the Vatican refusing to bless same-sex unions because they are a “sin.” By choosing Hell and giving Satan a lap dance, “Montero” thus uses Nas’s reclamation of his sexual identity in the face of religious oppression to become a story of self-actualization and self-acceptance.

But of course, reclamation doesn’t come easy. Initially, Nas holds his own shackles; he’s his own torturer; he’s literally running from himself. It’s a reminder of the internalized homophobia everyone––even the gayest of us––struggle with, there’s a very strong personal undercurrent. Lil Nas X put it best himself, in this Instagram post that (actually) brought me to tears:

Dear 14-year-old Montero, I wrote a song with our name in it. It’s about a guy I met last summer. I know we promised to never come out publicly, I know we promised to never be ‘that’ type of gay person, I know we promised to die with the secret, but this will open doors for many other queer people to simply exist. You see this is very scary for me, people will be angry, they will say I’m pushing an agenda. But the truth is, I am. The agenda to make people stay the fuck out of other people’s lives and stop dictating who they should be. Sending you love from the future. -lnx.

Metaphorically and literally, “Montero” is a raw journey into self-acceptance as a gay, sexual, and unique person. Lil Nas X opens the song with, “Welcome to Montero,” which is the fantasy land he is creating, but also his real, authentic self. The song is also catchy enough to make anyone––even the atheists and agnostics amongst us, myself included––give Satan a lap dance. And let’s be honest, everyone wants their journey of self-discovery to feel that unabashedly sexy.

In response to the controversy, one of Nas’s clapbacks stuck with me: “I spent my entire teenage years hating myself because of the shit y’all preached would happen to me because i was gay. So i hope you are mad, stay mad, feel the same anger you teach us to have towards ourselves.”

And he’s right. You can either stay mad or jam out to this absolute *bop*––like I’ve been doing since it dropped.