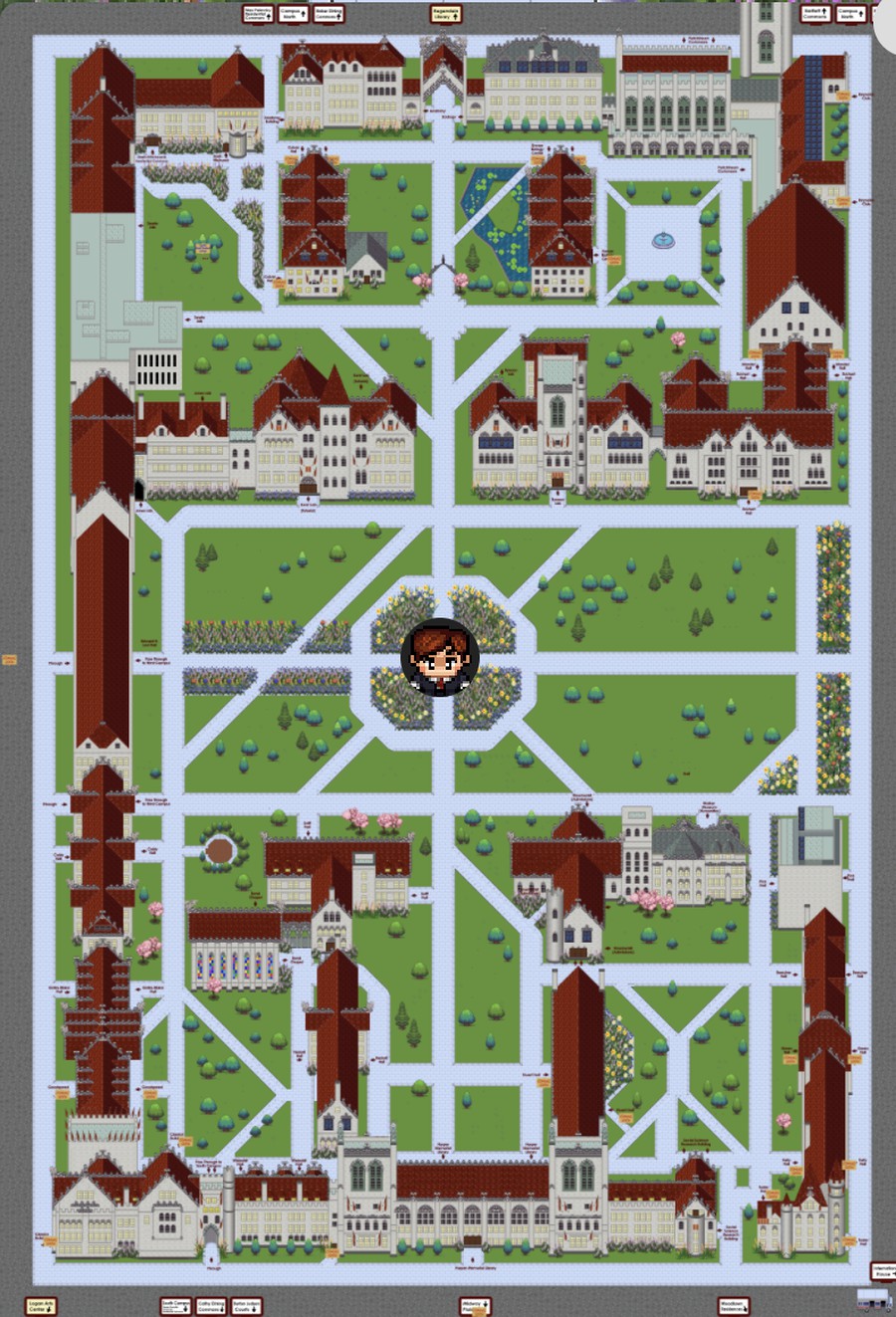 A miniature map of the main quad in the UChicago Gather virtual stimulation.

University of Chicago Professor Ada Palmer and a team of undergraduates have created a virtual version of the University campus on Gather, a video calling platform that gives each participant a controllable avatar that can be moved around a virtual world. When virtual characters are within a certain proximity of one another, the audio and video feeds of their owners connect. In the case of Palmer’s project, the virtual world is composed of University of Chicago buildings.

The platform features small study spaces, private rooms reservable by student organizations, the entirety of the main quadrangle, every house’s common room (where some Resident Heads have taken to hosting casual coffee and tea chats), and a hidden network of tunnels exclusive to the virtual version of campus, with more locations to come. Palmer and her team have given virtual tours to those who have requested them.

Palmer originally conceived of the idea in order to run a simulation of the Papal conclave—a gathering of all the cardinals of the Catholic church for the election of a new pope—for one of her classes. In a different year, the exercise would be carried out in-person, but given the ongoing pandemic, she needed to be creative. Gather would allow students to “walk around” and engage with each other spontaneously, as required by the simulation.

“Zoom breakout doesn’t let you do ‘spontaneous,’ it only lets you do ‘rigidly planned.’ The thing we haven’t been able to do in ages is go into a corner with somebody and chat and see our friend in another corner, wander over, and join their conversation. We, rather than whoever’s in control of the Zoom meeting, control our own movements. That’s really what’s precious in Gather Town,” said Palmer.

Though Palmer’s original plan was to re-create Rockefeller Chapel, she realized that the University might be interested in a larger project. After reaching out to College administrators, it was decided that a full virtual replication of campus would be part of the Winterfest activities offered. However, though Palmer and her team finished the project in time, Gather UChicago was ultimately not rolled out as part of Winterfest over concerns about password-protecting it.

Palmer re-created Rockefeller Chapel, the building to be used for the simulation, from memory, but realized making the rest of campus on her own would be untenable. As a result, she recruited around seven undergraduate students, including Benjamin Indeglia ’22, who worked to convert physical locations on campus into the digital art files that serve as backgrounds for the virtual locations. Indeglia said he is spending multiple hours each week creating virtual rooms, but does not think that increased vaccination and a return to non-distanced life will render his work obsolete.

“After students have graduated and have moved apart from each other, it’s a way for them to stay in contact and remember their roots here at UChicago by being able to visit the virtual campus. While there might not be a quarantine, they might be on opposite sides of the country or in different countries” Indeglia said.

Among the consistent users of UChicago Gather are College Core Tutors, who run small study sessions with whiteboards in the virtual version of Harper Library; the platform’s equivalent of where they would normally be located. Student organizations have also used the virtual Reynolds Club to hold meetings, though they aren’t the only ones.

“I caught the physics faculty playing poker in one of the RSO rooms at one point,” laughed Palmer.

Palmer has even received interest from alumni looking to experience the feeling of walking around campus again. One couple who got engaged next to Botany Pond used the virtual Botany pond to host an anniversary celebration with some of their friends who have also since graduated.

Overall, what Palmer hoped to re-capture in the platform was some of the spontaneous interactions lost to the rigidity of seeing others primarily through Zoom.

“I was leading a [virtual] tour when a student wandered by and asked ‘do you know a good place to meet a friend for coffee?’ And I said, ‘yeah, Ex Libris is open in the virtual Regenstein’ and they went over there. It was the most normal, forgettable experience you could possibly have but none of us has had that experience in a year,” Palmer said.

The site is available here.